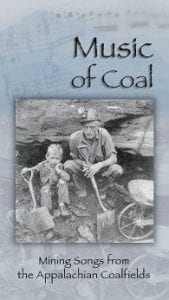 The cover of the two-CD package is seen in this photo.

Recordings by Dwight Yoakam, Natalie Merchant, Tom T. Hall and Merle Travis are among 48 songs about coal mining which appear on a new two- CD set entitled “Music of Coal: Mining Songs from the Appalachian Coalfields.”

According to Jack Wright, who produced the CDs and wrote the liner notes for the package, the musical collection is a “hybrid” of old and new songs – some previously recorded, others produced specifically for this project.

“We chose some songs that came out previously on independent labels and may not have been well known, but are vital in telling original stories from the heart of the coalfields,” Wright said. “In addition, we have well established artists represented here, like Ralph Stanley, Dwight Yoakum, Natalie Merchant, Tom T. Hall, Blue Highway and the Carter Family.”

Wright said the idea for the collection of mining songs, which includes a 68-page booklet that gives the history of and lyrics for each title, came from Paul Kuczko, director of the Lonesome Pine Office on Youth in Big Stone Gap, Va.

“The Lonesome Pine Office on Youth takes on projects that have a local and regional focus, utilizing indigenous talent and resources whenever possible,” Wright says in the introduction to the collection. “Previously, with his staff and students in Big Stone Gap, Paul had produced two photography books featuring historical images from Virginia’s Lee and Wise counties. While planning a third book of photographs dealing with bituminous coal camps around southwest Virginia, Kuczko got the idea to include a CD set of coal mining music along with the text and pictures – a project he referred to as Music of Coal.”

The songs address various aspects of coal mining history and culture, including black lung, union organizing, environmental impacts and the contribution of coal to the national economy.

Kuczko said the project made extensive use of regional talent, including Maggard Studio in Big Stone Gap, where Alan Maggard served as associate producer and his father Charlie recorded a song chronicling the 1934 mine explosion at the Derby mine. Other regional performers include Molly Slemp of Norton, Jim Stanley of Derby and the Rev. Joe Freeman, a former Wise County resident. Ron Short of Big Stone Gap and Rich Kirby of Dungannon, both of whom work with Appalshop in Whitesburg, served as assistant producers.

For Wright, a former Appalshop employee who hails from Wise but now lives in Ohio, the Music of Coal project was a chance to delve more deeply into the history of his native region and to discover archival photographs and recordings that had been “lost” or overlooked. For example, he became interested in the work of John “Ed” Sturgill, a well known musician around the town of Appalachia who died in 1965. Wright tracked down Sturgill’s daughter, Sally Sturgill Gibson, who sent him a post card of her father playing his banjo in the outdoor drama “Trail of the Lonesome Pine.” Wright also learned that Ed Sturgill had sent a tape of his original music to famed folklorist Alan Lomax. The tape eventually ended up at the Lomax archive, which made a copy available to Wright.

“It was a thrill for me to be able to give Ms. Gibson a copy of her dad’s music,” Wright said. “She had no idea that the tape existed and got to hear her father’s voice and music forty years after he’d passed away. That was one of the many small joys of producing this project. Another was to include a song from a live performance by Dock Boggs from the first festival I produced at Clinch Valley College in 1969. My longtime friend Mike Seeger had recorded it and made it available.”

The Music of Coal project began in 2005 with the formation of an advisory group of representatives from around the region. Funding was provided by the Virginia Foundation for the Humanities as well as Wise County Sesquicentennial Commission. The work is dedicated to Archie Green, a noted author and expert on coal mining music, who served as an advisor to the project.

The CD set and book can be purchased for $35 at Appalshop or through its website www.appalshop.org. The set is also available at the Lonesome Pine Office on Youth at 219 Wood Ave E, Big Stone Gap, VA 24219. It may also be ordered through the LPOY website www.lpoy.org or by calling the office at 276-523-5064 ext. 10. Supplies are limited.

This project is in honor of Wise County’s 150th Birthday and is funded in part by the Virginia Foundation for the Humanities.