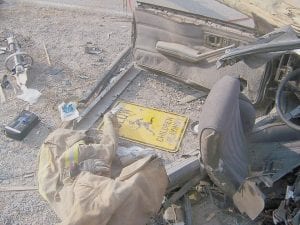 A sign warning drivers that children might be at play lies broken from its pole in the wreckage of Chevrolet Camaro that crashed into a utility pole while traveling at a high rate of speed in Fleming on the afternoon of September 26. Kentucky State Police Trooper Adam Hall, pictured bottom right surveying the wreckage said Eulis Adams Jr. and Gary Johnson, both 18, were seriously injured and had to be airlifted from the scene. Trooper Hall said Adams, the driver, was wearing a seat belt. He estimates the car was traveling between 80 and 90 miles per hour when it struck the pole. (Photos by Jerry Hall) 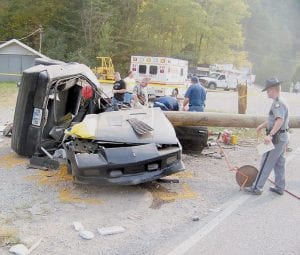 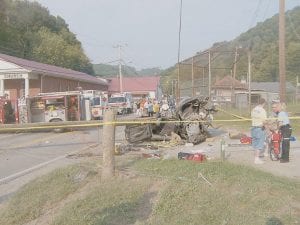 ACCIDENT SCENE – Pictured above is an overview of the crash scene at Fleming last week where a Chevrolet Camaro nearly broke in two after hitting a utility pole. (Photo by Jerry Hall)