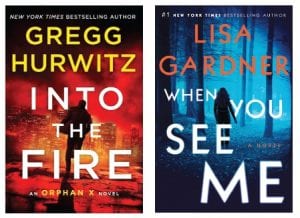 “Into the Fire,” Minotaur, by Gregg Hurwitz

Evan Smoak, the man formerly known as Orphan X, decides to retire after one more mission to help someone. But the call he receives throws him into the most difficult and life-threatening case of his career in Gregg Hurwitz’s latest thriller, “Into the Fire.”

Max Merriweather learns that his cousin has been killed. Max is already devastated by the loss of his wife, and he’s barely squeaking by. His cousin gave him an envelope that he asked Max to pass on to a local reporter if something happened to him. When a huge guy arrives in his apartment and begins to rip apart the place clearly looking for something, Max realizes that the envelope contains something very important. Fearing for his life, he decides to call the phone number that Smoak answers.

Since this is the last mission he’s going to take, Smoak figures this will be relatively easy. When the reporter is found murdered, it becomes clear that this is bigger than he originally thought. What seals it is when he thinks he’s eliminated the main threat for good, but then another person comes into play and the attacks continue. The organization Smoak is fighting is like a giant sweater, with him only pulling out a thread at a time, but the garment is still big and whole.

The story is brutal at times and Smoak has to dig deep and fight not only unseen enemies but also his physical body as the injuries begin to pile up. And when these villains track him down, everything he holds dear is at risk.

Hurwitz has a stellar series with Orphan X, and the stories get better with each installment. Throwing the main character literally into the fire showcases how truly heroic Evan Smoak is. He’s the man you want in your corner when justice is needed.

“When You See Me,” Dutton, by Lisa Gardner

In Lisa Gardner’s “When You See Me.” the discovery of a buried body brings together Boston Sergeant Detective D.D. Warren, FBI Special Agent Kimberly Quincy and Flora Dane, who escaped from a sexual predator years earlier, to work together to solve a cold case.

The first discovery is found just off a popular hiking area in the Georgia hills near the Appalachian Trail. When the victim is identified as a missing woman who was believed to have been abducted by the same man who kidnapped Flora, it sends the three women to the area to investigate. Soon other bodies are found, and the evidence leads to them questioning their theory that the man who took Flora was responsible. Is there another serial killer at large?

The small-town mentality of the local law enforcement task force proves to be an obstacle. And while Flora searches for answers for closure to her experiences, Warren and Quincy track down clues once the buried bodies are identified. While they are pursuing justice for these victims, there is another voiceless victim who needs their help, and she’s quite alive. When she was younger, she was taken after a traumatic experience and now cannot speak and lives in constant fear. Her goal is to somehow escape with Warren’s help without alerting the man holding her captive. Now can she can work up the courage to actually do it?

Lisa Gardner is a master of the psychological thriller that dives deep into the minds of characters that experience trauma and come out stronger from the experience. It’s a pleasure to have her three series characters working together in the pursuit of justice, and the case they are trying to solve provides insight into the inner workings of how law enforcement finds answers in such horrible circumstances.