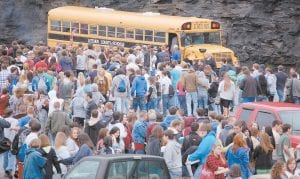 NOT A DRILL THIS TIME — Letcher Schools Supt. Anna Craft praised students at Letcher County Central High School for the calm manner in which they reacted to an order to evacuate Letcher County Central High School on Tuesday morning after two maintenance workers were injured seriously when gas exploded inside a manhole in which they were working. The workers are being treated at the University of Cincinnati Hospital’s burn unit.

Tim Miller, 29, of Whitesburg, and David Young, 38, of Kentucky River, a community located between Payne Gap and Kona, were listed in stable condition Tuesday night in the burn unit at the University of Cincinnati Medical Center. Miller was transported by helicopter from the Whitesburg hospital to the Cincinnati hospital. Young was taken by ambulance.

Miller’s father-in-law, Tommy “Tick” Lewis, said the men were working behind the high school where heating units are located when the explosion occurred. The area contains propane tanks, a boiler, a cooling tower and other components of the system used to heat and cool the building.

Lewis said the two men were working on one of two pumps in a manhole where water gathers as a byproduct of the HVAC system’s steam boiler when the mishap took place.

“Tim went down into that hole that is about 10 feet deep,” Lewis explained. “Dave was leaning down watching Tim. When (Tim) unplugged one of the pumps, it caused a spark, which ignited the gas that was in the manhole. Where the gas came from I don’t know. They are trying to determine where the gas came from. It could have been methane gas.”

“It burned both of their T-shirts off ,” said Lewis, who was able to visit with Miller at the scene shortly after the explosion.

“He was conscious and alert,” said Lewis. “The danger now is pneumonia and infection.”

A friend of the Miller family said both men are doing great and were talking and joking Tuesday evening.

She said Young could be released from the hospital today (Wednesday).

David Young and his wife Pricey have a teen-aged daughter, Courtney. Tim Miller is married to Susan Lewis Miller.

Lewis praised school officials and personnel at the Whitesburg hospital for how well they reacted to the incident.

“They really were great in how they reacted to a situation like this,” said Lewis. “You could tell they had really worked on their disaster plans.”

Miller and Young expressed appreciation to the first responders especially Ricky Adams, whom Miller credits with saving his life.

Letcher County Schools Supt. Anna Craft said the high school would remain closed Wednesday to let officials finish their investigation into the cause of the explosion.

Craft said students and faculty were immediately evacuated from the school building after the explosion and directed to a parking lot at the far end of the building. Students were then loaded onto spare buses to keep them warm until regular buses arrived to take them home. Students whose parents normally pick them up from school were taken to the old Whitesburg High School to wait for their parents.

Craft said she is proud of the way in which students handled the situation.

“The students acted in such an adult manner,” said Craft. “That is the importance of a mock drill.”

Craft said no students were injured and no damage was done to the school building.