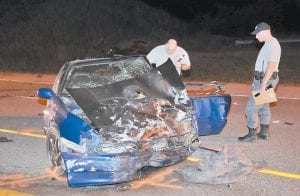 Police examined one of two vehicles involved in a fatal collision Monday night on U.S. Highway 23, near the Kentucky-Virginia state line. Police say John Caudill, 30, and Michael Gullett, 36, were killed when the two vehicles collided as Gullett was driving south in the northbound lane. (Photo by Chris Anderson)

The return from a shopping trip in southwest Virginia ended in tragedy Monday night for a Letcher County couple who recently celebrated their second wedding anniversary.

John Tate Caudill, 30, of Low Gap Branch, died at the scene of a violent collision when his vehicle was hit head-on by a driver traveling in the wrong direction.

The driver of the other vehicle, Michael Gullett Jr., 36, of Pound, Va., was also pronounced dead at the scene by Letcher County Deputy Coroner Robbie Campbell.

The accident occurred at 8:50 p.m. on Aug. 30 on US 23 near the Virginia/Kentucky state line. State police say Gullett was traveling south in a northbound lane and struck Caudill’s vehicle, which was traveling north.

Michael Gullett’s three-year-old daughter, Abigail, who was a passenger in his vehicle, was airlifted from the scene to a medical center in Johnson City. Abigail, who received cuts and bruises in the wreck, is listed in stable condition. Gullett’s five-year-old son, Eryx, was uninjured.

Mary Caudill, John Caudill’s wife who was traveling with him, was airlifted to Bristol Regional Medical Center. Mrs. Caudill received a broken toe and a laceration to her head which required 30 stitches to close. As of press time, Mrs. Caudill, who is an accountant for the Chris Gooch CPA firm in Hazard, was awaiting release from the hospital.

Jenkins Patrolman Jim Stephens said he was at the Jenkins Volunteer Fire Department Monday night when a man walked into the fire department and reported that a vehicle was traveling 100 miles per hour the wrong way on US 23. Stephens said he had gotten in his cruiser to check out the complaint when he received a 9-1-1 page notifying him of the collision.

“His (Gullett’s) dad said he traveled that mountain every day and couldn’t figure out why he was in the other lane,” said Stephens.

Stephens said three helicopters were ordered to the scene, but only two were needed. Seatbelts and child restraints were in use at the time of the collision.

The investigation into the accident is being continued Kentucky State Police Trooper Derek Hall.

The Caudills were on their way home from Lowe’s in Norton at the time of the wreck.

John Caudill worked with his father, Bob, of Linefork, installing cabinets and hardwood flooring. He was also a bass player for the gospel group, “The Master’s Harmony”, which performs at churches throughout Kentucky, Virginia and Ohio. Ten years ago, then- Master’s Harmony bass player Phillip Sexton, a popular UPS deliveryman, died in a wreck in which his car was struck by a vehicle traveling the wrong way near Whitesburg.

Charlene Mason, a member of “The Master’s Harmony”, said the group will continue to perform.

“We know John wouldn’t want us to stop,” said Mason.

She said the group had always wanted to play at Breaks Interstate Park and was scheduled to perform there Sept. 3 and Sept. 4.

Mason said John Caudill was a one-of-a-kind individual who would not say anything negative about anyone.

Mason said Mrs. Caudill was always by his side at concerts and practices.

“I would watch her on stage and she would always watch him and just smile,” said Mason. “She knew every word to every song. They were so happy. There aren’t that many young people left that are straight and narrow.”

In addition to his wife and father, John Caudill is survived by his mother, Linda Caudill; two sisters, Leah Caudill and Sarah Caudill, both of Linefork; and a brother Matthew Caudill of Linefork.

Funeral arrangements, which will be handled by Everidge Funeral Home, were not available at press time.

Funeral services for Gullett are set for 1 p.m. Sept. 3 at Carty Funeral Home in Neon. Burial will follow in the Haven of Rest Cemetery at Mayking.

He was the son of Lona Fleming Boggs of Seco and Michael Gullett Sr. of Ohio. Surviving in addition to his parents are his companion, Ashley Church; his stepfather, Lester Boggs; his stepmother, Vicky Gullett; two daughters, Iris Wynn of Mayking and Abigail Gullett of Richmond; two sons, Logan Michael Wynn of Mayking and Eryx Gullet of Richmond; and two sisters, LeVonda Arthur and Leighanna Singh, both of Missouri.