Two men are charged after ‘meth lab’ found at Blackey 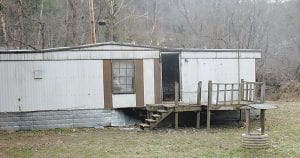 Police say meth was made in this home at Blackey.

“When (police) got out of the car, they could smell it being made,” said Letcher County Sheriff Danny Webb. “It’s bad stuff.”

After police received information that methamphetamine was being made in a trailer at Burton Hill in Blackey, officers conducted a “knock and talk” at the mobile home and found meth as well as drug paraphernalia and items used to make meth, according to Webb.

“While inside the residence several items were found that (were) used in making meth such as lithium battery strips in the freezer, red lye in the bedroom, coffee filters, glass light bulbs used for smoking meth, hypodermic needles used for injecting meth and actual methamphetamine product,” Lt. Brian Damron of the sheriff ’s department wrote in a citation. “Throughout the residence were signs of meth usage and production.”

Drano, hoses and bottles were also found, said Damron, who has charge of the investigation.

Before giving police consent to search the residence, according to court documents,

Gibbs, who rents the residence, told police he had thrown an unknown amount of meth out the back door.

When asked to empty his pockets, McCool threw a plastic baggy containing what was believed to be meth behind him and the baggy landed on a couch, according to a citation.

“The one-step method is a quick way that they produce the methamphetamines,” said Damron. “Also known as shake ‘n bake because they put it in a bottle and shake it up and the chemicals combine.”

The trailer is located in a residential area with a neighborhood watch that was in contact with Webb.

Daniel Bentley and Sonya Freeman, 21, 133 Spider Hill, were also at the trailer when police conducted the knock and talk. Bentley and Freeman were arrested on warrants in unrelated cases.

Bentley, Freeman and McCool were taken to Whitesburg ARH, where they were decontaminated.

“Some of them started complaining of shortness of breath, having chemicals on their skin so they had to be taken to the hospital,” said Damron.

The case will be presented to the Letcher County Grand Jury.