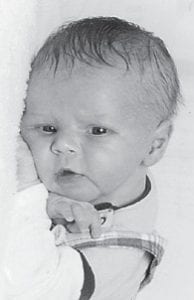 Mark Payson Day was born Feb. 10 at St. Joseph London Hospital to Andrew and Deana Day of Partridge. He is the grandson of Thomas and Sharon Cook of Partridge, Mark and Dede Day of Morristown, Tenn., and Rick and Linda Weaver of East Bernstadt. His great-grandparents are Jessie Weaver of London and the late David Weaver, Merrill Holbrook of Partridge and the late Brenda Holbrook, and the late Christine Day of Cumberland.