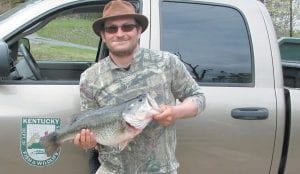 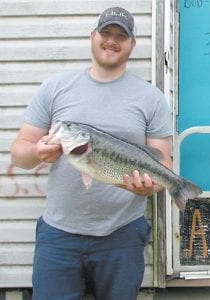 Letcher County fishermen Darrick Sexton (above) and Paul Collins (right) are the second and third men to donate a trophy bass to the Kentucky Department of Fish and Wildlife Resources’ “Trophy Bass Propagation Program,” which is slated to run through May 31. The 8.5 pound and 8.7 female largemouth bass were caught by Sexton and Collins at Fishpond Lake at Payne Gap. The first female bass donated to the program, an 8.2 pound trophy caught by Bobby Kincer of Mayking, was also hooked at Fishpond. “Our (program) has received three donations so far, all from Fishpond Lake,” Fish and Wildlife said. “We now need largemouth bass from other waters and will no longer accept trophy bass from Fishpond. Donated bass will be returned in good condition to the waters of origin along with offspring from the program, after use in spawning at Pfeiffer Fish Hatchery.” Sexton and Collins posed for the photographs recently outside the ANA Bait and Tackle Shop at Payne Gap, which held all three trophy bass safely until they could be claimed by fish and wildlife officials.