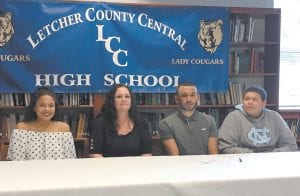 Two Letcher County Central High School basketball players signed scholarship offers during a ceremony at the school on Tuesday afternoon. Above, Torell Carter of Mayking (second from right), the school’s first-ever first-team All-State player, signed a scholarship offer from Berea College. Below, Austin Caudill (second from left) signed an offer from Alice Lloyd College. Pictured with Carter are, from left, his sister, Daysha Carter, an LCC sophomore; his mother, Lucy Carter; and brother Diondre Carter, an LCC freshman. Another brother, Rakim Mitchell, was unable to attend. Seen in the photo with Caudill, of Isom, are his mother, Deanna Caudill; his father, Mark Caudill, and LCC assistant coach Winston Lee. School officials praised both players for having high academic achievements in addtion to their hoops skills, noting that both did well on their college entrance exams in addition to maintaining high grade point averages while playing for the Cougars. (Eagle photos) 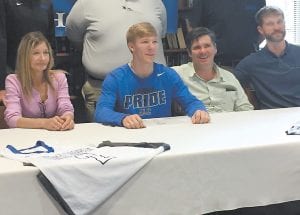