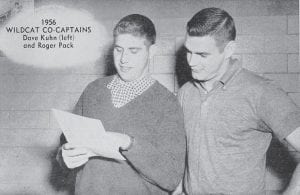 Senior end Roger Pack (top right) and junior guard Bob Collier (bottom photo) were among the 11 starters on offense when the University of Kentucky Wildcats met the Volunteers from the University of Tennessee on Saturday, November 24, 1956 in a game played at Shields-Watkins Field in Knoxville. Several Letcher County residents attended the game, which UT won by the final score of 20-7. Pack, a 6’2” 202-lb. co-captain, and Collier, who stood at 6’1” and weighed 209 lbs., were both graduates of Jenkins High School — an occurrence that would be unusual at any time, much less on a team with a roster of only 55 players (NCAA rules permit team rosters of 105 players today). The Wildcats, which finished with a won-loss record of 6-4, were coached by the legendary Blanton Collier, the Paris, Ky., native who coached the Cleveland Browns to the NFL Championship in 1964. The team also included defensive tackle Lou Michaels Jr., who went on to become a Pro Bowl kicker after coining the phrase, “Nothing sucks like a Big Orange,” after UK beat UT in 1957. The photos seen on this page were taken from a 1956 game program provided by the UK Digital Library. 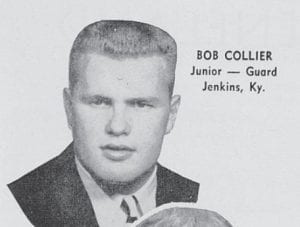