Tyler Herro loves being in the gym 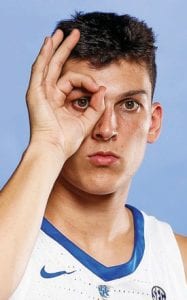 Tyler Herro is a gym rat.

Herro, known for his outside shooting, spends his spare time in the gym, whether it’s morning, night or noon.

Herro said he has natural feel for the game but doesn’t want to be complacent.

“Working hard, putting in time and hours into my craft, being able to score and do different things and that counters for everything,” he said. “That makes me more of a natural scorer.”

Herro made an immediate impression during Kentucky’s four-game exhibition tour in the Bahamas. Herro said his goal was to show his ability as soon as possible.

“I definitely wanted to try to play my best in the Bahamas and show fans a little bit of my game,” he said. “I still think there is a lot I can improve. I’m just getting better each and every day, working hard and getting ready for the season.”

However, Herro said more is in store in the future.

“I think I can do much more as you saw in the Bahamas,” he said. “ I feel like coming in I was (under the radar), definitely, just because of where the rankings had me. I knew personally I was better t han what they had me at. I mean it’s a matter of time, being able to show people what I’ve got.”

Herro doesn’t yet know what his role will be, but knows it will include his shooting skills.

“They haven’t really told me anything. Coach (John Calipari) just told me whenever I shoot, expect every shot to go in,” he said. “They expect all of my shots to go in. I’m just coming in and playing confident and with the same confidence I had in high school.”

During the recruiting process, Herro, who averaged 32.9 points and 7.4 rebounds per game at Milwaukee Whitnall High School, de-committed from Wisconsin and received a lot of backlash but remained “level-headed during the process.

“I’m a fan of Wisconsin,” he said. “It was nothing against them. I still watch a lot of football games, even basketball. I’ve got some friends on the team, so it was just a matter of doing what was best for me and my family. At the end of the day, I felt like being at Kentucky was the right (place) for me.”