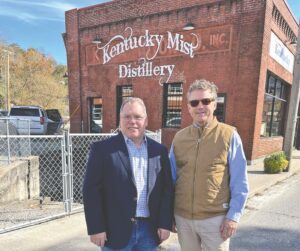 U.S. Senator Rand Paul (R-KY), ranking member of the U.S. Senate Committee on Small Business and Entrepreneurship, was in Whitesburg Tuesday to honor Kentucky Mist Moonshine as the U.S. Senate Small Business of the Week. Senator Paul (right) pointed out that in establishing the craft distillery in 2015, the company’s founder, Colin Fultz (left), “restored and outfitted an historic building in downtown Whitesburg.”

The U.S. Senate recognized Whitesburg-based Kentucky Mist Moonshine this week as its Small Business of the Week.

Fultz, who rented the old KYVA Motor Co. building from the city of Whitesburg six years ago, said he was honored with the award, and happy that the Senator delivered it personally. He said Sen. Paul had been to Whitesburg once before but had not been downtown and seen how it’s growing until yesterday.

“I think it was a great thing not just for Kentucky Mist, but for Whitesburg as a whole for a downtown business,” Fultz said.

In the 1920s, during Prohibition, Fultz’s grandfather, “Little Henry” Holbrook, started distilling and bootlegging corn liquor. Despite a 17-year stint in a federal penitentiary, he continued bootlegging moonshine until he died in the 1980s. In 2015, Fultz decided to turn the Holbrook family tradition into a legal business.

Using trade secrets and recipes passed down for generations, Colin perfected his family’s moonshine recipe for mass production. He worked out a deal with the city to restore the historic, 1925 car dealership building that the previous owners, the Letcher County Conservation District, had slated for demolition until the city traded a vacant lot for it in order to save it. Fultz’s father, Mack Fultz, a stone and brick mason, repaired the exterior, and they made structural repairs to hold the weight of massive vats of moonshine. Fultz outfitted it with a copper pot still and opened Kentucky Mist Moonshine. The company experienced 105% growth from 2019 – 2021, and now has four stores – the distillery and gift shop in Whitesburg, a store at Broadway at the Beach in Myrtle Beach, S.C., and other at Barefoot Landing in North Myrtle Beach, and a fourth at The Wharf in Orange Beach, Alabama. All of the spirits are distilled in Whitesburg, and Fultz said they always will be.

The company features more than a dozen varieties of moonshine, all of which contain no artificial flavors or additives. Their products are sold throughout the United States, and have won several gold medal awards in spirits tasting events. The Kentucky Mist Moonshine now as 15 employees, supports local Kentucky artisans and regional small businesses, selling handcrafted goods at each of their locations. Kentucky Mist Moonshine makes fruit-infused moonshine and gives the fruit byproducts to local farmers for livestock feed.

“They regularly participate in local and regional events, including the annual Mountain Heritage Festival. Kentucky Mist Moonshine is a member of the Kentucky Distillers’ Association, Kentucky’s premier bourbon and distilled spirits trade association.

“The company’s success has been profiled in several regional and industry publications. During the COVID 19 pandemic, Kentucky Mist Moonshine stepped up to manufacture hand sanitizer for local hospitals and clinics. During the summer, they hosted a series of concerts at their facility to support local artists and build community after a year of lockdowns.”

The stop at Kentucky Mist was one of 11 the senator made during a campaign swing through eastern Kentucky on Tuesday. He stopped in Jenkins at the Smile Faith Dental Center and delivered a short speech prior to the stop at Whitesburg. The Whitesburg stop included lunch at Kentucky Mist catered by CANE Kitchen.