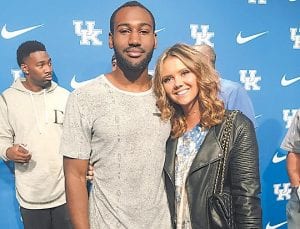 Dominique Hawkins and girlfriend, Emma Smith, found there are a lot of Kentucky basketball fans in Indiana.

It’s never too early in this state to speculate about the upcoming Kentucky-Louisville basketball game at the KFC Yum Center Dec. 21.

Both teams are nationally ranked — again. Kentucky has been sensational offensively most of the season, Louisville has been one of the nation’s best defensive teams.

So which team has more at stake in this game? That’s a question I posed to several media members who cover the Kentucky basketball team on a daily basis.

“Normally I would always say the Cardinals have more riding on this game because it’s been so difficult for them to win in the series lately,” said WLEX-TV sports anchor Keith Farmer. “This time I believe there’s more riding on it for the Wildcats.

“They already have a loss to UCLA and taking one to another highly-ranked team might start to make this young bunch of Wildcats start to think too much when it comes to the big games.”

“The Cats are going to be a solid, if not heavy, favorite in this one. The Cards will be able to play with a nothing-to-lose mindset at home. With a loss to UCLA and some tricky non-conference matchups with North Carolina and Kansas looming, the Cats may feel a bit of pressure in this one with an eye on March seeding,” Drummond said.

“It’s a close but I’ll say Louisville because the game is on their court and losing at home usually hurts a team’s reputation more than a road loss,” Leach said.

“I think Louisville because of its recent lack of success in the series. Kentucky has won nine of the last 10 games between the two rivals and John Calipari is 8-1 against the Cards and Rick Pitino,” Taylor said.

They all four do agree on one thing — Kentucky will win.

“I think Kentucky’s offensive firepower and a tendency to minimize its turnovers will be the difference for the Cats in a close one,” Leach said.

“I almost give the edge to the Cardinals because it’s on their home floor. But I believe UK will be able to get the running game going to win maybe an 80-75 game,” Farmer said.

Drummond expects a comfortable UK win — until he remembers what UK did to 26-point favorite Louisville in football.

“I think Kentucky should win this game by 12-15 points, but like the Governor’s Cup game showed us this year, crazy things tend to happen in rivalry matchups,” Drummond said. “If the Cats do win, it will be because they have an efficient offensive night and the Cards won’t be able to generate enough offense to keep pace.”

Taylor has a similar thought on UK’s offense.

“I think UK’s guard play will propel the Wildcats to a fifth straight win in the series. I don’t think UL can keep up with De’Aaron Fox, Malik Monk and Isaiah Briscoe,” Taylor said.

Ever wonder what it was like for Kentucky basketball players when they just try to get away to maybe have a fun day with their girlfriends.

Seniors Dominique Hawkins and Derek Willis tried to do that over the summer when they took their girlfriends, Emma Smith and Keely Potts, to Holiday World, an Indiana amusement park.

“It was crazy. We didn’t think it would be that bad at Holiday World because it was pretty far away but we got stopped so much,” Smith said. “We were literally hiding from people at some point because it got so bad. It was like people stalked us. There were so many fans. It was crazy, but we have got used to it and think it is funny. Over the years it is hard on Dom, but they embrace it as much as they can.”

It was hard for the players not to be noticed because Willis is 6-9.

“All the girls just stood there for pictures and followed us around. And in the water park, kids were coming out left and right for pictures and to see them,” Potts said. “So even in Indiana, there were Kentucky fans everywhere.”

Aaron Hogue, the Central Kentucky Fellowship of Christian Athletes area director, admits he gets close to the athletes he works with at UK. That was especially true with wide receiver Alex Montgomery of Florida, who had three knee surgeries and has decided to give up football.

“He’s had nothing but tough times on and off the field in his life,” Hogue said. “He’s not from a spiritual background but he recently made his commitment to Christ. That was a great night for him and his friends and me. It gets me excited to help bring that message to people who have not heard it and it is very fulfilling to see someone like Alex do what he did.”

He came to UK as a highly regarded piece in Mark Stoops’s first UK recruiting class. He played in eight games in 2013 as a freshman and had 16 catches for 137 yards and two scores. He got injured jumping in the air to bump a teammate to celebrate a Kentucky touchdown. He had to redshirt in 2014 to rehab his injury before returning to play nine games in 2015 before he suffered another season-ending knee injury. He did not play this year and once again needed surgery.

He probably had some of best receiving hands I had seen but we did not really get to see that on the field. He was just a phenomenal athlete, but he had a soft heart for people. He went on a oneweek service/educational trip to Ethiopia in 2015 and Hogue said that made a lasting impression on the player.

The week before Senior Day, Montgomery asked Hogue to stand with him. Stoops’s wife and children did the same thing.

“I was honored to do that,” Hogue said. “He wants people around him. I had been with him from day one. I had seen him battle surgery that did not turn out the way he wanted. I tried to be a friend and mentor to him. You really get attached to a kid like that.”

Perhaps the first real hint that Kentucky had a chance to salvage the football season came in the fourth game when the Wildcats lost 34-6 to No. 1 Alabama. After that game, Alabama star defensive lineman Jonathan Allen said the Cats were the most physical SEC team he had ever played against.

Now that the season is over, he’s not backing off his praise of the Wildcats.

“I got to give it to the whole Kentucky front,” Allen said. “When I say that was probably the most physical game that I’ve played in this year, I have to give it them. They came with it that game. It kind of caught us by surprise. That was a real physical game.”

Kentucky loses only one starter — all-SEC center Jon Toth — off the offensive line and will have seven returning players who all played regularly this season.

“They meant business when they came,” Allen said while in Atlanta for an awards ceremony last week. “I feel like we kind of overlooked them a little bit at first. It was a wake-up call upfront that said ‘hey, you got to bring it. These guys are playing. It’s SEC ball now.’”

Kentucky football commit Walker Wood had surgery on his knee this week after getting hurt when Lafayette lost to Trinity in the Class 6-A title game. The Lafayette quarterback said it is nothing that will keep him from enrolling at UK in January as planned.

“I will be running around in no time,” said Wood. “I should be back to 100 percent in about three months.”

He met with UK coach Mark Stoops and assistant coach John Schlarman last week during a home visit to let them know what was going on.

“The team doctor is doing my surgery. He did my shoulder surgery, too. They know the doctor well. I will be just fine,” Wood said.

Wood completed 203 of 321 passes for 3,047 yards and 30 scores this year with 12 interceptions. He ran for 1,321 yards and 31 scores. He’s already been named the winner of the Paul Hornung Award given by the Louisville Quarterback Club to the state’s top player. In his career he ran for 4,199 yards and 73 scores; passed for 8,412 yards and 74 touchdowns; and had 100 yards and one touchdown receiving. That meant he accounted for 148 touchdowns and close to 13,000 total yards in his career.