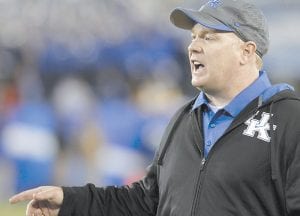 Kentucky coach Mark Stoops says that the Wildcats will be minus two wide receivers for Saturday’s game against No. 9 Missouri.

Stoops announced this week that freshman Alex Montgomery is out for the rest of the season after tearing his left anterior cruciate ligament in Saturday night’s 48-14 defeat of Alabama State. Montgomery was injured after celebrating his 6-yard touchdown reception with several teammates, landing awkwardly and immediately grabbing his leg.

The coach also said that freshman Ryan Timmons is out with a sprained ankle sustained against ASU.

Junior receiver Javess Blue is expected back for Kentucky (2-6, 0-5 Southeastern Conference) after missing Saturday’s game with an eye injury sustained when he was hit by a football during pregame warmups.