If you ask Anwar Stewart about his blocked field goal against Alabama in 1997, he will downplay the significance of what he did. However, he returned that block 68 yards for a touchdown in UK’s overtime win over Alabama that touched off a wild post-game celebration where the goalposts came down.

Stewart, a linebacker/defensive end at UK, went on to a 13-year professional career in Canada including four Grey Cups.

Now he’s the defensive line coach at Kentucky and is not prone to talk about his play.

“I don’t make it about me. I tell guys my time is up. God blessed me with an understanding of the game. My job now is to help them and educate them so they can be successful,” said Stewart, “It ain’t about me but sometimes when you recruit kids they want to know how you can develop them.

“I played at the next level for a long time. I am not a guy who just read a book or went to a (coaching) convention and is now supposed to be an expert coach. I did that but I also played a long time. Big Dog (UK recruiting coordinator Vince Marrow) teases me that I want to be the best DL coach in the country. That’s why I work so hard. I want players to get better. I don’t know all the answers, but I know where to go to get them.” 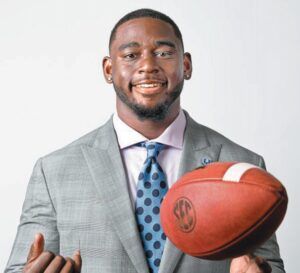 University of Kentucky defensive star Josh Paschal is for an expanded College Football Playoff system but does not think that would have impacted how UK has played during his career. (SEC Photo)

But what about that field goal return and win over Alabama?

“That was a big part of Kentucky football and history at the time. It was a great time for us and one of the few times we had gone to back-to-back bowls,” Stewart said. “I am trying to beat Georgia, Florida, Tennessee in the same year and do things we have not accomplished in a long time, or maybe never.

“We are ready to go. We are trying to build on what we have now and not the past. It is always nice to go back and reminisce. It was a great time. But let’s go beat Alabama now and then I will talk.”

Stewart said it has been “electric” around the UK football facility getting ready for the upcoming season. 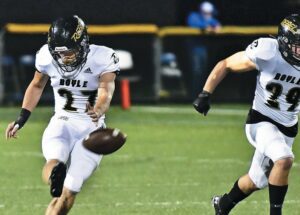 Kicker Jackson Smith of Boyle County is verbally committed to Kentucky but he also wants to be a full-time position player at Boyle this season. (Chris Zollner Photo)

“Our guys are doing a hell of a job in the weight room. Guys have stepped up and competed against each other to make us better. We are just sharpening all those tools that we can,” the Florida native said.

Stewart insists he has “patience” with his players to help develop their talent but has little patience with less than 100 percent effort.

“If you don’t come with that want-to, that is where I have an issue,” Stewart, who returned to UK for the 2020 season after one year at Appalachian State, said. “I always tell guys if they will give me effort then I will develop them into the player they want to be. If a guy isn’t doing that, I have to figure out why and how I can help him come with passion and the love for the game it kicks.

“If you don’t have that, you should not be here. This is the SEC and a grown man’s league. I tell them there are so many guys around the nation who would love to be where you are. I tell my guys you don’t have to do this, but you get to do this. Take advantage of the opportunity you have and that’s what I think we have guys ready to do this season.” s

Kentucky’s Isaiah Jackson was one of seven Southeastern Conference players picked in the first round of the NBA draft and the only UK player. He was picked 22nd by the Los Angeles Lakers but ended up with Indiana after two trades that suited him because it put him closer to family in Michigan.

Jackson said Indiana fans should know he is a hard worker.

“I bring it all, I’m a defensive anchor, I’m going to be their energy guy that Indiana needs, and like I keep saying, I can’t wait to get there and get to work and show everybody, prove everybody wrong,” Jackson said.

Obviously, Jackson feels he should have gone higher than 22nd.

“He gets off his feet so quickly and reads shooters so well. It seemed unlikely that minutes would be there early in his career in LA, as the Lakers focus on winning another title. Which is why it makes sense they would trade the pick away to the Pacers,” DeCourcy wrote.

Sports Illustrated’s Jeremy Woo also called Jackson an “elite runjump athlete” who could provide needed inside defense for the Pacers.

Jackson will be playing in the NBA Summer League and is eager to show what he has been working on since his UK career ended.

“I just want to help Indiana win. I know like last year they didn’t have the best season but I can’t wait to get there and just help them win. That’s my whole mentality, it’s just going in and working and helping them win,” he said.

“I feel like Kentucky helped me. It taught me a lot of things. One of them was like how to deal with adversity. The other one was just on the court just playing tough, playing with that fire, playing like every game can be your last or the other team’s championship.” s

Boyle County all-state kicker Jackson Smith has already verbally committed to Kentucky — the school where his father, Andy, was an all-SEC punter. He has a strong, accurate leg and is also a highly regarded punter.

This season, though, he also figures to be a full-time position player for Boyle, the defending Class 4A champion.

“He is more than likely going to start at tight end or outside linebacker,” Boyle coach Justin Haddix said. “He is practicing there right now. He wants to play.

Haddix admits it is hard not to take Smith’s kicking/punting for “granted” because of his past success.

“He has proven he can do the job. He’s just that good to where you don’t even really worry about him. Probably not fair to him but it also just shows how much confidence we have in him,” Haddix said. s

John Calipari is not the only SEC coach producing first-round NBA draft picks as Moses Moody of Arkansas was picked 14th in last week’s draft. ESPN analyst Jay Bilas says while Arkansas coach Eric Musselman has NBA experience, that’s not why he can produce talented players.

“The NBA experience I think is helpful, but it’s the level of detail that he has as a coach. You’ve seen it up close, the scouting stuff. Those guys are detail-oriented,” Bilas said. “I’m a believer that players respond to whatever the coach really believes in.

“Some people they play music during practice, they do this, they do that. Eric is really detail-oriented and really high energy, and I think the players respond, and clearly, they responded really well to it at Nevada and Arkansas. I think Moses certainly benefited from being around that level of detail, and you could see his improvement over the course of the year as a result of it.” s

The proposed College Football Playoff expansion will likely increase playoff teams from four to 12 and count UK senior defensive lineman Josh Paschal as a believer in the change.

For a team like Kentucky, that’s big because knowing being in the top 12, not the top four, could result in a playoff berth is a more realistic expectation. However, Paschal doesn’t think it would change the way teams he has been on have played.

“I know that we gave it our all each season. Especially at Kentucky, we’ve been through a lot, not only in Kentucky football but in our athletic program. We took a lot of losses in our athletic program, especially with coach Schlarman and the football program, and of course with (linebacker) Chris Oats,” Paschal said. “Playing lightly is something that we don’t do, so I think we’re all good with that.”

Some have questioned what impact adding more games — probably three — might have on athletes. Paschal understands the concern.

“That would be a lot of games, but at the same time, if you want to be the champion, you’ve got to do it. I don’t think that would really raise a concern to the people that actually get into the playoff expansion,” Paschal said.