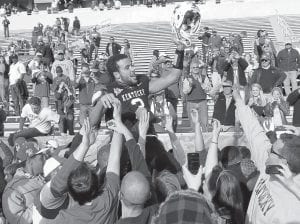 University of Kentucky senior wide receiverturned QBfor a-day Matt Roark was carried off the field by fans and teammates after his heroics against UT. (AP photo)

Finally after many years of frustration, the University of Kentucky football team said to Tennessee, “If we can’t go bowling then neither can you.”

UK may have had its five-year bowl streak broken this year, but head coach Joker Phillips and offensive coordinator Randy Sanders more than earned their annual salary by laying to rest the 26-year losing streak to the hated Vols — and in the most extreme unlikeliest of ways. Matt Roark caught 64 passes Saturday at Commonwealth Stadium from the center and never dropped but one which was low and to the left (which he recovered).

For many years (26 to be exact) and through many different coaching eras, UK has been trying to find a way to come up with a game plan to beat the hated Tennessee Vols. In the end all it took was a couple of former UT players (Sanders and quarterbacks coach Tee Martin) to draw it up and, along with Coach Phillips and senior wide receiver turned quarterback for a week Matt Roark, implement it after only four days of practice.

Don’t ever underestimate the importance of Coach Sanders’s play selections on Saturday. It was in my opinion a classic example of out-scheming and great play calling by Sanders, given with what he had to work with and the team he was going up against.

UK’s Sanders- lead offense overachieved in its performance against the UT defense in ultimate proportions. It couldn’t have come at a better time for Sanders, whose scalp was wanted by many across the Commonwealth.

Sanders led UK’s offense to a No. 4 ranking in 2010 with Randall Cobb, Derrick Locke, and Chris Matthews at his disposal, but had fallen on hard times this year when it was discovered he had a quarterback with inept passing skills and decision making ability to start the season and then had to replace him with a true freshman to finish out the campaign.

Saturday may not have had an impact on whether Joker Phillips was coming back or not, but personally I think it saved Sanders’s job — or it should have.

Basically, the entire UK offensive coaching threw the kitchen sink and everything piled up in the garage at UT and had the Vols on their heels defensively for much of the first half. Then the UK defense took over midway in the second quarter and was at its yearlong best the remainder of the game except for three freak passing plays in the second half that had the UK defensive backs on an island by themselves with UT’s talented sophomore wide receiver Darick Rogers.

The storyline of Roark leading the Wildcats from the QB position actually broke in Lexington on midday Friday, but still no one could believe it was anything but a possible threeor four-play package put together for a series or two from Randall Cobb’s old Wildcat position.

Still on game day Saturday, many longtime UK football followers both in and outside of the media world told me right up until kickoff that it was just another classic UK rumor.

In the UK pre game warm-ups, Roark only run pass routes with the wide receivers, that done of course to set the scene for the UT coaching staff. Then when UK took its first possession of the game and gracefully marched down the field with its most impressive running drive all season it still never convinced us astute media members up in the press box. All I could hear some of them say as they passed by me was, “Well that was impressive, now let’s see how far backward they can go with their real quarterback.”

To be painfully honest, I thought it was a classic case of one of legendary basketball coach Adolph Rupp’s favorite sayings when his team was underachieving: One team couldn’t play, but was just good enough in what it was doing to keep the other team from playing. But regardless of how the game was won it was as sweet and rewarding of a Wildcat win on the gridiron as I can recall.

The only thing that was missing in my eyes was Matt Roark, whose mother’s family lives in Perry County, from holding that old “Beer Barrel” high above his head as they carried him off the field and to the locker room.

Ira Combs lives in Jeff in Perry County, where he operate Tri-State Sports Media with his brother, Harold.