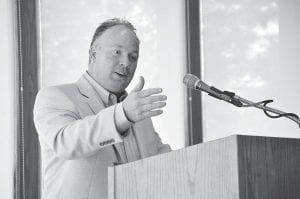 Thanks to one of the University of Kentucky Athletics Association’s top donors, Greg Wells, and the good folks at his First Trust Bank of Hazard, the University of Kentucky’s three most recognizable coaches (Matthew Mitchell, Mark Stoops, and John Calipari) treated First Trust’s special friends and a select few members of Big Blue Nation from eastern Kentucky to a special meet and greet on June 13 at Hazard Community College.

Two UKAA officials who made the trip with Coach Stoops and Coach Mitchell (Coach Cal came in a different plane after speaking earlier in the day at another site) said these functions are very rare these days and only those special friends of the UKAA can make it happen.

After a dicey airplane ride through lightning and thunderstorms deep into the mountains, Mark Stoops, UK’s new football coach, took the podium first and was introduced as the only undefeated coach on the UK campus, which of course drew the first laugh and ovation of the afternoon. Stoops began his remarks by saying his excitement grows daily about where he thinks the UK football program will be in the not-so-distant future.

He spoke of the way many talented recruits are accepting the pitch of how his staff plans on turning around the negative image that has haunted UK in the past except for a select few minor bowl years. Stoops mentioned that he expects defensive tackle Donte Rumph and outside linebacker Bud Dupree to be special players along with running back Raymond Sanders. Stoops said the three will definitely be leaders on their respective sides of the ball.

Stoops did emphatically make one point that stood out to me and that was, “Don’t get misguided by all the Air Raid talk. We will have a credible running game. I’ll see to that.”

The last question Stoops answered came when he was asked to comment on a recent comment by Western Kentucky University coach Bobby Petrino, who said he felt strongly the Hilltoppers would open his tenure at 2-0, meaning he felt confident his initial WKU team would have no problem whipping SEC schools Kentucky and Tennessee this fall.

Stoops reply was, “Is that right?” with a wink of his right eye to the gathering.

UK women’s basketball coach Matthew Mitchell took the podium next and spoke of his rural Mississippi roots and how similar they were to eastern Kentucky and how people who live here fight so hard for what they have in life.

Mitchell told how he started out as a high school coach with dreams of eventually being the coach of the Los Angeles Lakers, only to learn after one month into his high school career that he was being assigned the additional duties of being the assistant football coach.

The last and obviously most anticipated speaker of the event of was, of course, men’s basketball coach John Calipari.

Coach Cal spoke of how his father reared him to keep life in its proper perspective, advice which has served him well after winning the 2012 NCAA championship then being eliminated 12 months later in the first round of the NIT by Robert Morris College.

Calipari, being a veteran and masterful public speaker, was in the middle of telling a favorite story when a trainload of coal cars came within close proximity of HCC with bells and whistles blowing strongly. Cal just stopped his speech when he heard the train and said, “God, this feels so much like home where I grew up in the coalfields of western Pennsylvania. I was on the other side of the tracks back then. You know and I know — everyone in here knows — what the other side of the tracks were like at some point in their life.”

Coach Cal teased the crowd a little by saying he is helping organize a future event that would make this season’s final State Farm Champions Classic (Duke, UK, Michigan State, Kansas) look elementary, but could not divulge any particulars yet on the special hoops event.

All in all it was a special afternoon that took place right where the roots of the UK basketball fan base started the legacy many years ago.

After the event, the coaches spent a little extra time mixing and mingling with everyone in a very humble and appreciative manner to make it an even more special afternoon.

I’m getting a little antsy myself with college football not that far away, so while surfing the Internet and picking the brains of a few special friends I’ve made in the media contingent that covers UK and the SEC, I’ve come up with what I think may be a few interesting tidbits for conversation for the next few weeks.

No. 1. Vanderbilt will return to being Vanderbilt (three of those five SEC wins last year were against the worst teams UK, Auburn, and Tennessee have fielded in their schools’ history). And the Dores did lose their QB who helped them win two other games by two and three points in the last few minutes of the game.

No. 2. By next Christmas if not earlier, UofL Athletics Director Tom Jurich will open his arms wide and forgive Bobby Petrino, who will come humbly crawling back to Louisville and tackle the ACC challenge that Charlie Strong fears without a quality QB. The move will send Petrino back onto the national scene as early as he could expect.

No. 3. The BCS champion will come from the South once again, probably Alabama, Florida, Georgia, or Texas A&M. Two solid dark horse candidates are Clemson and Florida State.

No. 4. Barring injury — and that’s a big if — it says here Maxwell Smith will be under center against WKU and either Patrick Towles or Jalen Whitlow will transfer before the WKU game. All three are way too talented to carry a clipboard up and down the sideline, but only one can play and they’re all three in the same class.

No. 5. Kentucky will beat WKU in the season opener. I can’t see Maxwell Smith or whomever the UK QB is throwing four picks like last year when UK basically handed the historic upset win to the Toppers.

No. 6. UK fans will return to Commonwealth Stadium with energy and help Stoops steal at least one and maybe two SEC wins late in his initial season after his young and talented receiving corps have time to get a little game-seasoned. Tennessee and Missouri both look beatable, especially at Commonwealth Stadium, if UK is not too beat up physically by then.