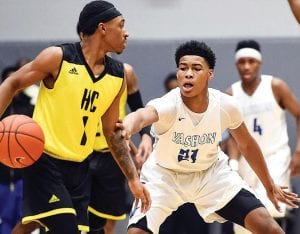 St. Louis four-star forward Cam’Ron Fletcher (21) can be sensational at times but needs to improve his consistency and outside shot before he gets to Kentucky. (USA Basketball Photo)

Cam’Ron Fletcher, who recently committed to play basketball at the University of Kentucky, knows a little bit already about playing in the spotlight.

He averaged 16.8 points and 3.8 rebounds per game last season when Vashon High School in St. Louis won the Missouri 3A state championship. He averaged 11.8 points, 6.5 rebounds and 1.4 assists per game this summer in the Nike Elite Youth Basketball League.

The 6-6, 210-pound Fletcher had North Carolina, Kansas, Michigan State, Missouri and Purdue among his 20-some scholarship offers before he verbally committed to Kentucky after making an official visit.

“Cam is a tantalizing talent and when things are really going for him he can make such a huge impact scoring the ball in the interior. He’s a sensational weakside shot blocker on the defensive end,” said David Kvidahl of STLhighschoolsports.com and the St. Louis Post-Dispatch.

Kvidahl should know since he has seen Fletcher play more than 20 times in his career. That includes seeing some games when he was not at his best. 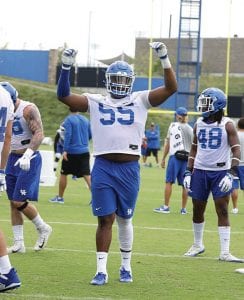 “There are those days where he would disappear against good opponents — last year against East St. Louis for instance. Cam had his breakaway dunk swatted from behind into the student section and when the home crowd went wild he sort of withered,” Kvidahl said. “It was a full house against an opponent that would go on to win the Class 3A Illinois state title and he was MIA (missing in action) after that blocked shot. He wasn’t the only one who had a tough time that night but that did stand out to me.

“Now that he’s being counted on as a senior leader, I’m interested to see how he steps into that role for a program with the highest of expectations. Vashon is chasing an undefeated season.”

Fletcher’s high school coach, Tony Irons, told CatsPause/247Sports Network analyst Chris Fisher that the UK staff wants Fletcher to focus on “continuing to play with a high motor” which goes along with what Kvidahl observed.

“Play hard for the whole duration of the game and use his energy to make plays,” Irons told Fisher.

Kvidahl believes the “allure of Kentucky” as a blue blood of college basketball led to the quick commitment by Fletcher.

“There just aren’t a lot of kids that get the offer to join one of the nation’s most recognizable and successful athletic programs. That’s hard to turn down,” the writer said. “I’m not surprised he decided to make his verbal commitment. More and more student-athletes tell me they like verbally committing early to take the pressure off them and allow them to focus on their senior year of high school. After all, they are still just kids.”

Fletcher would seem to be another high character player that Calipari and his staff also like.

“I’ve never heard as much as a whisper about any shenanigans he may have been affiliated with. It would be hard for him to get away with much because he is so recognizable,” Kvidahl said. “Playing for Vashon in the city of St. Louis is big deal. It’s the most recognizable high school program that resides in the city and among the most historically successful in Missouri. Cam has been in the limelight here since he made his decision to attend the V.

“He’s played with an outstanding group of teammates, two of whom were D-1 (Division One) signees last year in Mario McKinney Jr. (Missouri) and Donyae Mc- Caskill (Portland). Cam should be able to fit right in with what is the typically loaded Wildcat recruiting class and returning roster. I don’t believe it will overwhelm him but I’m sure there will be an adjustment to the D-1 level as there usually is for most high school athletes.”

Fletcher’s weakness is his outside jump shot. Kvidahl calls him a “killer finisher in the paint” with an inconsistent jump shot.

“It has to get better for him to become a more complete player. He can get streaky and bury some high school 3-pointers but it’s the least consistent part of his game. To make opponents respect him as an offensive player, he’ll have to knock down shots from mid-range and beyond,” Kvidahl said.

If you want to follow Fletcher’s progress during his senior year, Kvidahl can help because STLhighschoolsports.com is dedicated to high school sports.

“You can find stories and photos on any number of local teams and athletes. We have a full statistical database for every sport we track that goes back to 1999,” he said. “Folks that want to keep up with Cam can do so on our website and also follow us on Twitter @ STLhssports. I will cover a signifi- cant number of Vashon’s games this winter and you can find me on Twitter @DavidSTLhss.”

Retired TV sports anchor Alan Cutler worked for the Cincinnati Bengals Radio Network for about 15 years and also covered the Bengals for WLEX-TV when he was allowed to walk the sidelines.

“In all that time the only player that I thought had a stronger arm than Jared (Lorenzen) was Brett Favre (a 20-year NFL veteran who is in the Hall of Fame). Jared could throw it 60 yards plus yards and hit a man in stride,” Cutler said. “It was a tight spiral that came at you like a pitcher throwing close to 100 miles an hour. There are very few human beings that could do this.”

“He would regularly put on a show. I remember some of the receivers begging him to ease up on how hard he was throwing. Their poor hands took a beating, I’m sure,” Drummond said. “That arm strength was legendary. He used to win bets by kneeling at the 50-yard line and throwing the ball through the uprights in one end zone. I’ve never seen anything like it before or since. As someone with smaller hands who never could throw a football very well, I marveled at that ability.”

WVLK Radio show host Larry Glover isn’t sure Lorenzen’s talent was ever fully appreciated before his recent death at age 38.

“His legacy will probably be his uniqueness. That’s certainly memorable, but sadly the legacy should be that he was one of the most accomplished players in UK football history,” Glover said. “His numbers stack up against the best players. Not just at Kentucky, but in the SEC.”

Junior nose guard Quinton Bohana could give Kentucky the dominant defensive lineman this year that the Cats have not had in a long time, especially in the middle of the line.

He weighed about 350 pounds when training camp started, hopes to be down to 345 this week and get to somewhere between 335 and 340 pounds when UK opens the season against Toledo on Aug. 31.

“I have trimmed down from last year,” Bohanan said. “I am so much stronger, quicker and faster thanks to our strength coaches. I am more explosive. During the summer we were doing individuals (individual workouts) and I could tell I was a lot more explosive. I am looking forward to putting it all together this season.”

He started seven games, including the final six, last season and had 17 tackles, including four tackles for loss, and forced a fumble. He started five games as a freshman in 2017 and had 14 tackles.

He says UK’s strength coaches pushed him “to the limit where you can’t do no more and then push you past that limit” in the offseason.

“You have to work at it and then everything translates to the game. All our strength coaches have played before, so they know what they are talking about. They know what to do to make you a better player,” Bohana, who had 160 combined tackles as a high school junior and senior in Tennessee, said.

Some days Bohana admitted he was not overly thrilled with the coaches when he left workouts.

“Right after we got through I would be like, ‘I don’t think I can move.’ Then you will start feeling good and then wake up and do it again,” Bohanan said. “It becomes routine and you want to wake up and do it and make yourself a better player.”

“The number one thing I look for in a quarterback is the throwing motion. I can fix a lot of issues but I cannot stop 17, 18 , 19 years of muscle memory of throwing. You can’t change that,” Hinshaw said. “They both can run the football, too. Nik Scalzo is your dynamic guy. He is only about 5-11 but he can beat you with his feet and arm. Amani is exactly the same way. He can throw the heck out of it and he can run. When you can beat teams with your legs and arms, that’s what we are looking for and they can both do that.”

Gilmore was also a talented high school baseball player in Louisiana who has talked about also playing baseball at UK.

“Not worried about that. Just trying to get him ready to play quarterback,” Hinshaw said. “But he’s an unbelievable baseball player and we will cross that bridge later.”

Redshirt sophomore quarterback Walker Wood knows the offense better than either true freshman but he’s had two surgeries on his throwing shoulder during his time at UK. Hinshaw says he’s a “very good athlete” and even with junior Terry Wilson, junior grad transfer Sawyer Smith and the two true freshmen quarterbacks on the roster that there has not been any discussion about moving Wood to a different position.

“I would really prefer him to be the great quarterback we recruited,” Hinshaw said. “He has just gone through injuries. It can take time to really perform at this level but when he had his surgeries he went back some and he just needs a chance to be healthy and show he can compete.

“But my job is to get all the quarterbacks ready. There have been seasons where we had to play a fourth string quarterback to get to bowl games. You just never know. I really like all the guys we have and feel really good about what they all can do.”

Quote of the Week: “I just say how I feel. I just believe being a confident person in life in anything you do is half the battle. If you don’t believe in yourself, then who will? I believe in me and our team,” senior linebacker Kash Daniel on why he sometimes says what he does.

Quote of the Week 2: “I feel like this past summer that my routes got a lot better. My speed has gotten better. Same with my strength and that will help me get open. I think me and the other tight ends can all stretch the field. You can spread us out and we can do whatever,” tight end Justin Rigg on what he can add to the offense.

Quote of the Week 3: “It’s kind of one of those things where if you get in trouble with your parents and they’re just disappointed. It hurts worse when they’re disappointed in you and that’s kind of how I felt today. We let our coaches down,” defensive back Jordan Griffin on the defense’s play in UK’s first scrimmage.