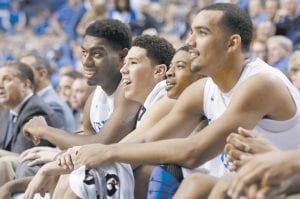 Kentucky players watched the game against Montana State during Sunday’s 86-28 win. UK collected all but three votes of 65 possible as the nation’s top team. Those went to No. 2 Wisconsin. (AP Photo/James Crisp)

Made a lot of believers among Top 25 voters, too.

After running roughshod over the Jayhawks in the Champions Classic, the Wildcats routed Boston and Montana State to cap a perfect week. The impressive performances allowed Kentucky to consolidate its spot atop the AP poll on Monday, earning all but three votes from the 65-member media panel.

Those three went to No. 2 Wisconsin, which edged Arizona by three points. Duke and North Carolina rounded out the top five, with Kansas tumbling from fifth to No. 11 after its 72-40 loss to Kentucky.

Employing substitutions akin to line changes in hockey, the Wildcats were simply too tall, too long — too talented, really — for the Jayhawks or anyone else to hang with them. Kentucky rolled to an 89-65 victory over Boston, then held Montana State to 20 percent shooting and forced 21 turnovers in an 86-28 victory on Sunday. 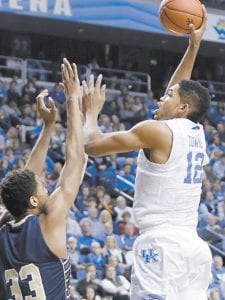 “I loved how we defended,” Wildcats coach John Calipari said. “We didn’t look at the score and we just played every possession.”

Kentucky should have at least one more game like that this week when it plays Texas-Arlington on Tuesday. The Wildcats face Providence on Sunday before a date with seventh-ranked Texas, which jumped from 10th to occupy the spot just behind sixth-ranked Louisville after blowout wins over Iowa and California in the 2K Classic.

It was a costly week for Texas, though. Leading scorer Isaiah Taylor hurt his wrist against the Hawkeyes and could miss up to six weeks, which would mean missing the game against Kentucky.

“I would think it’ll be a while,” Texas coach Rick Barnes said, “but it is what it is and we’ve got to look at it as an opportunity. We’ve got guys that can take advantage of this.”

Virginia moved up one spot to eighth, Wichita State climbed to ninth and Gonzaga was 10th.

The Jayhawks, the top one-loss team, start off the second 10. They were followed by unbeatens in Villanova,

Florida fell to No. 18 after its loss to the Hurricanes and an overtime victory over Louisiana- Monroe, and Michigan State dropped to 19th after its loss to Duke in the Champions Classic. Michigan finished the top 20, followed by West Virginia, UCLA, Creighton, UConn and Arkansas.

CLIMBING IN: The Hurricanes, unranked a week ago, debuted at No. 17 after rallying from a 15-point hole for a 69-67 win over then-No. 8 Florida. They backed it up with a trifecta of wins over Drexel, Akron and Charlotte in a span of four days. West Virginia, UCLA, Creighton and Arkansas also entered the poll.