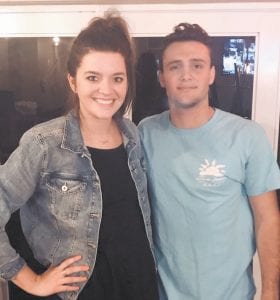 Kentucky fan Katie Hensley of Boston was in Ft. Lauderdale on vacation when she happened to meet UK football signee Nik Scalzo while she was having dinner at his father’s restaurant.

Kentucky fan Katie Hensley now lives in Boston and was recently in Ft. Lauderdale for vacation with her boyfriend and his family to see the Colorado Rockies open the baseball season. She had lived in Colorado for a couple of years and thought it would be a fun trip in warm weather.

Since the NCAA Tournament was going on, she was looking for somewhere to watch games and the bar was full at the hotel where she was staying. Luckily, there was a hotel next door with a bar and grill.

“We were the only ones in there. It was kind of late,” Hensley, a 2014 UK graduate, said. “We asked our waiter if he could turn on the games. I was with a bunch of Duke fans and our waiter asked us who we were rooting for.”

When Hensley told him she was rooting for Kentucky to win the tournament, he told Hensley he was actually going to Kentucky next year. Turns out the waiter was quarterback Nik Scalzo, a UK signee. Of course, Hensley didn’t know that immediately.

“He didn’t mention he was a quarterback. I did recognize the name when he said it, but I don’t follow UK football quite closely enough that I picked up he was a football player,” Hensley said.

Turns out Scalzo’s father owns Sun Tower Hotel & Suites along with the Sand Bar Grill where the UK signee had been called in to work when another waiter couldn’t be there.

“During the summer I work four times a week so I can make money,” Scalzo said. “During the school year I just work when they need me to replace somebody.”

Hensley said he graciously let them stay late to watch games while he was sweeping the floor and doing other things to prepare for closing.

“We were just talking and I thought he was just going to be a UK student,” Hensley, age 27, said. “I finally asked him why Kentucky and he said, ‘I am going to be the quarterback.’ He was so unassuming but I remembered I had read about him and told him that.

“He was recovering from an ACL injury but he looked fine. I went back up and read up more about him. I wish now I had asked him more questions.”

Scalzo said he normally doesn’t have time to talk as much with guests as he did Hensley and her party but because it was near closing time, he was able to have more of a conversation with them.

“Once she said she went to Kentucky, the conversation just went from there,” Scalzo said.

Hensley said her boyfriend’s father asked him who his game might remind them of and he quickly said Baker Mayfield, the former Heisman Trophy winner from Oklahoma who had a banner rookie season for the Cleveland Browns.

Scalzo is rated as one of the top 10 quarterbacks in Florida and led Cardinal Gibbons to a 32-6 record in his three seasons as a starter while completing 59.6 percent of his passes — 522 for 876 — for 6,471 yards with 74 touchdowns (both school records) and only 23 interceptions. He also ran for 613 yards on 147 carries with four scores.

Hensley said Scalzo didn’t brag on himself but did agree to take a photo with her that she posted on Twitter. The UK signee later retweeted it and Hensley was surprised how much attention the tweet got.

She’s originally from Cincinnati. Her parents, Carol and Mark Hensley, are 1984 UK graduates who met their freshman year at UK. They have UK season tickets and she says she was “born and raised” on UK.

“I follow Kentucky big time but I never ever thought about running into a future UK quarterback in Ft. Lauderdale,” Hensley said. “We could easily have just eaten dinner and gone our separate ways. Now I have to get to Lexington for a game to see him play. I need a new UK jersey.”

She says she needs a new UK jersey, so once she finds out his number — he hopes it will be No. 2 — she’s almost certain to buy that one.

“You just never know about the reach of BBN,” she said.

I’m not sure whether it will take Kentucky players or fans longer to get over the Elite Eight loss to Auburn that denied UK a Final Four berth — and maybe even a national title. The loss stung so much because UK beat Auburn twice, including by 27 points in Rupp Arena without Reid Travis during the season.

However, that’s not the first time a SEC rival has done that in the Elite Eight. LSU did the same thing in 1986 after losing to UK three times that season. Kentucky won by two points at LSU, by 11 points at home and then by three points in the SEC Tournament before losing 59-57 in the regional final in Atlanta in Eddie Sutton’s first season as UK’s coach.

Sound familiar to some shooting numbers UK had against Auburn?

“Of all the teams I played on, even today at (age) 55 that is still the game that gets the biggest emotional reaction,” Harden said. “We decided as a team that it was important for the program to have a great year in Eddie’s first year. From the team meeting we had after Joe Hall resigned, we all said we were sticking together and would bring a national championship to Kentucky and we were going to openly talk about it.

“We kept talking about winning a title and it was such a unifying thing inside Big Blue Nation. We knew what winning meant to our fans and we tapped into that. We all took it really personal when we lost to LSU just like our fans did. I sit here 33 years later and still get emotional talking about that game and probably always will.”

Recruiting rankings don’t always measure how much a player might develop in college and Kentucky senior offensive lineman Logan Stenberg of Alabama has made himself into one of the SEC’s best guards.

Stenberg has always been an aggressive, physical player. During spring practice offensive line coach John Schlarman encouraged him to become improve his techniques and he did.

“Logan is a really good player for us. He’s has always been a physical guy. But he’s becoming much more technical too. That’s what we really challenged him to do this offseason. Don’t just go out there and be the guy that mauls everybody. Go out there and be a guy that does it with good technique and consistency,” Schlarman said.

“That’s where I see his game growing. He’s not just a guy that comes out there and mauls people. He’s playing more disciplined. He’s not getting the late stuff where he gets a penalty in a game setting. That’s something we can build on too.”

Stenberg figures to be playing on the same side with junior Landon Young, who redshirted last season after tearing his ACL in the preseason. Stoops was pleased with how the two played together during spring practice.

“They have some chemistry going there and give us two tough, physical players on that side of the line,” Stoops said.

No one would like to see Kentucky offensive lineman Bunchy Stallings get picked in next week’s NFL draft more than April Snell.

She knows what Stallings did the last three years to help her son, Benny Snell, become the all-time leading rusher at Kentucky.

“Bunchy is an outstanding young man. Every time we see him, no matter where it is, we hug him and thank him for what he did for Benny,” April Snell said. “Benny might have got to be the face of the program for scoring touchdowns but he would not have got into the end zone without that line. Benny would thank them all the time and so did we.

“Bunchy is just amazing. His whole family is. He’s been through so much. He’s a very humble young man and I still think he has a very bright future ahead of him.”

Her son does, too, and could go as high as the third round in the draft. However, April Snell doesn’t see drastic changes coming in her life.

“I have worked at State Farm for 15 years. I am a life underwriter. That’s what I do,” April Snell said. “I don’t see anything changing any time soon. “It would be nice for him to do well and help us out a little bit but I am not expecting to quit my job any time soon. I just want him to have a long, healthy career and make it to his second contract.”

Quote of the Week: “Offenses, their goal in the run game is to displace the nose, get me out of my spot. If I get out of my spot there’s nothing we can do defensively. I pride myself on being that guy not getting moved and being a disruption,” Kentucky nose guard Quinton Bohanna on anchoring UK’s defense.