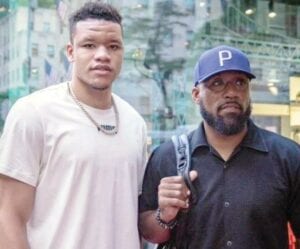 Kevin Knox Sr. says last year was a learning experience for his son, former UK player Kevin Knox Jr., and believes the recent hiring of Kenny Payne will help him next season.

Not only did Kentucky coach John Calipari and his staff get Kevin Knox Jr. prepared for the NBA, but so did Kentucky fans.

Knox was drafted by the New York Knicks and just finished what his father, Kevin Knox Sr., considered a “sophomore slump” his second season after a more successful rookie season two years ago.

“I think playing in New York has been a dream come true. Obviously coming to Kentucky, my wife and I felt everything was done for reason. Us going to Kentucky and dealing with BBN and the fans was great. New York is very similar to Kentucky fans. They love their basketball. Kentucky fans were able to get us ready for New York,” Knox Sr. said.

“Cal always said if you are not winning, you are learning,” Knox Sr. said. “For us it was definitely a learning experience and we are really excited about the new additions upper management has made.”

Remember that Knox Jr. is just 21 but already has two years of NBA experience. His father remembered what Calipari told NBA personnel about giving his son three or four years to really “grow up and mature” as a player and person. Knox Sr. noted how NBA stars Paul George and Giannis Antetokounmpo needed time to emerge as top players.

“You have got to learn and become a man,” Knox Sr. said. “Last season was very frustrating knowing that you can contribute more. We have a family motto that nobody works harder than the Knox family. We were always in the gym before practice and after practice working on his game just like at Kentucky. Not getting to play can be very frustrating.

“I always told him to look at the glass as half full, not half empty. Being healthy, able to watch and learn, that’s all good. Obviously you want to play but if you are not playing you have got to learn somehow. He watched the veterans. I am hoping his third year will be the one where he puts all the right ingredients into the soup.”

One advantage for Knox Jr. is that his father is a former college and NFL receiver — he was on Florida State’s 1993 national championship team. He understands the ups and downs athletes experience.

“Any time you are able to have anybody that can help with what you are going through, it’s good. Not only am I his dad, but I have been a professional athlete,” Knox Sr. said. “I have been there and am able to give him inside information and advice. That helps the athlete being able to overcome the times people are doing well but also the times adversity is sitting in.”

“When adverse situations hit you want a support system to help you persevere so you can see the light at the end of the tunnel,” Knox Sr. said. “Cal understands that.”

“As a family we are ecstatic he has been hired as an assistant coach with the New York Knicks,” Knox Sr. said. “It’s just a blessing. The guys used to all call him ‘Uncle KP.’ He’s family. For us, that means something.”

Knox Sr. said his family — they have three children in addition to Kevin — has been healthy during the pandemic and enjoyed having a chance to have Kevin back home.

“When your child leaves high school for college he does not come back and stay at the house for extended periods. For Kevin to come back (to Florida) and for us to get family time under the same roof was a real blessing.

“But it will be back to all basketball soon. Right now we are talking about the mountain we are preparing to climb to get New York basketball on top where it belongs and where we think it has a chance to go now with the new management and new coaches.” s

Recent Kentucky basketball commit Nolan Hickman had been a starter at Eastside Catholic High School in Seattle after the first game of his freshman season. His coach, Brent Merritt, has known him since he was in fourth grade.

The 6-2 point guard surprised most last week by committing to Kentucky and Merritt has no doubts he will become a “great player” for coach John Calipari. However, Hickman won’t be playing for Eastside and Merritt this season. Instead, he’s transferred to Wasatch Academy in Mount Pleasant, Utah.

“You have to do what is best for you. I love the kid. He wants to play at the top-level and play a top-tier schedule nationally,” Merritt said. “Who knows? We may not even have basketball (in Washington because of COVID-19).

“He’s an old soul type of kid with his maturity. It’s hard losing him but he’s just a great kid. He is a killer. He’s got a great attitude and is so coachable. A lot of high school kids are scared to talk to their coach. He’s not scared to talk. He will take criticism. If you yell, he does not go into a shell. He just takes control of games and the best way to get him going is just tell him somebody else is better than him.”

Hickman averaged 17.3 points, 3.4 assists, 3.7 rebounds, and 2.0 steals per game as a junior and also hit 38 percent from 3-point range. However, the most surprising statistic about him is that he led his team in blocked shots at 2.0 per game.

“You can’t score off the dribble and shoot jump shots because he has such great reaction,” Merritt said. “He blocks shots with his left hand because most shooters are right-handed. It’s unheard of for a 6-2 guy to lead his team in blocked shots. It’s just crazy.”

Merritt says Hickman’s athleticism is not limited to his shot-blocking ability. He’s also faster than he looks.

“I really didn’t know how fast he was until his sophomore year,” Merritt said. “He doesn’t look fast because he just glides. I make my kids run track their freshman and sophomore years, and he is really, really fast.”

“He scores with ease, kind of like (Portland Trailblazer star) Damian Lillard. He can handle the ball, hit a pull-up. He got better at making guys better. From his freshman year to junior year, he really improved on that.”

Merritt doesn’t think the spotlight Hickman will have on him at Kentucky will overwhelm him, either.

“He is a humble kid. I am sure he will love it at Kentucky,” Merritt said. “He will be able to embrace everything about Kentucky. He wants to play in the NBA. Nobody was recruiting him as a freshman. He has been playing with a fire to get on the map since then and has not stopped working. He won’t stop working this year and he won’t stop when he gets to Kentucky. He’ll be great there at Kentucky and fit in perfectly.” s

Kentucky’s offensive line is being projected as one of the best in the Southeastern Conference this season. The unit has experience — center Drake Jackson, guard Luke Fortner and tackles Landon Young and Darian Kinnard started every game last year — and talent.

But it also has one more thing — discipline.

Despite not being able to work out at UK’s facilities during the pandemic, the offensive linemen apparently resisted the temptation to slack off and possibly gain bad weight. Even Kentucky coach Mark Stoops admits he was surprised when the team was able to start working out again and he saw his offensive linemen.

“I was really surprised to see how many guys took care of themselves. Take a guy like Nick Lewis who went from mid to upper 300s, down to the lower part of 300s and he looks better than ever. He’s a totally different person,” Stoops said.

That was just the start.

“You look at a lot of guys: Luke Fortner is looking thick and looking good, Darian Kinnard, really I could go on and on,” Stoops said. “I don’t think there’s one guy in that offensive line room that got fat and out of shape.”

“That’s a testament to the standards that we’ve set in that room, what’s expected of us. Coach Schlarman harping on it every day and having so much experience and leadership in that group,” Stoops said. “It’s not just one person, or two or three or four, it was a whole group of guys that know how to take care of their stuff. I think that shows on the field and it shows off the field.”

“He’s really changed his body and he’s improved quite a bit. As you know, he’s a giant guy. He’s a big man and got himself in shape. He’s moving better and we needed that out of Nick,” Stoops said. s

What is the best Kentucky team he’s played against?

“Back when I was an assistant at State, that (Rick) Pitino team we beat in the SEC Tournament title game in New Orleans in 1996,” Stansbury said.

That was the Kentucky team led by Tony Delk that had nine future NBA players. UK won 74-56 at State during the regular season but lost 84-73 in the SEC title game. Both State and UK reached the Final Four. Syracuse beat the Bulldogs in the national semifinals and Kentucky beat Syracuse in the title game.

“That may be as good of a Kentucky team as there was,” Stansbury said. “Kentucky’s had a lot of good ones, though. That 2010 team with six first-round (NBA) picks was great. Even in 2012 when they were No. 1 in the country, we were up 11 or 13 at halftime. Rodney Hood got hurt and that changed the whole game.”

Of course, that 2012 Kentucky team also went on to win the national championship.

“There have not been many Kentucky teams that were not good,” Stansbury said.

His worst loss to UK?

“I am sure Kentucky fans would tell me to quit whining, but we all remember that (SEC) championship game in 2010. I am up three with seven seconds to go. I foul with three seconds to go.”

Eric Bledsoe hit one free throw, missed the second. John Wall got the rebound but missed a 3-pointer. However, DeMarcus Cousins put in the follow shot at the buzzer to force overtime and Stansbury still believes Wall got into the lane too quick for the rebound.

Another “bad loss” for Stansbury came in 2004 against coach Tubby Smith.

“We were undefeated in conference player. We are up one at our place with one second to go. Kentucky had the ball out of bounds in front of its bench, threw the ball to the rim and (Erik) Daniels tips that thing it at the buzzer,” Stansbury said. “It gave us our first conference loss.” s