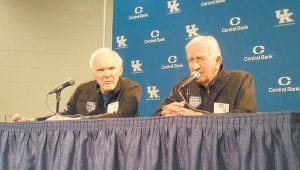 Ed Beck, left, was a starter on UK’s 1958 national championship team. Later he became a minister and made a lasting impression on young UK fans. (Larry Vaught Photo)

More than 50 years ago Dale Polley was living in Hopkinsville and he can remember his parents taking him to Madisonville to hear Ed Beck preach.

“To this day I remember part of his sermon — pretty impressive for a young boy to remember something positive that long ago that happened at church,” Polley, who now lives in Nashville and is a past chairman of the Music City Bowl, said.

About a year later Beck, a starter on UK’s 1958 national championship team, came to Hopkinsville to lead a revival at Polley’s church, First United Methodist Church.

“While Ed was in Hopkinsville for this revival he stayed at our house. I remember watching TV with him,” Polley said. “I was in awe of him. He was tall, a star basketball player, a minister, but he was a nice man with a great story that he wrote about in one of his books.

“I have laughed many times years later thinking about Ed showering in our guest room shower because it was a small and short shower.”

Polley got to see Beck at Rupp Arena before the Cats beat Auburn. Beck was part for a celebration of UK’s 1958 national championship and Polley found him before the game. He relayed the story about Beck staying at his house in Hopkinsville.

“He lit up. I wish we had had more time to talk about that time in Hopkinsville and all that has happened since then but he was being quickly escorted to the game,” Polley said. “He was gracious to have his picture taken with me. Ed Beck is a fine man of God and has led many people in that direction along their spiritual journey.”

Wally Bryan, the former mayor of Hopkinsville, says he was only 10 years old when Beck was playing for Adolph Rupp at Kentucky. He remembered Rupp not wanting his players to be married but made an exception for Beck, who was from Georgia.

“Beck was the type characterplayer who I’d pick for a role model for my grandson, William,” Bryan said.

He remembers a Beck visit to Hopkinsville to preach, too.

“He was wonderful, and talked as part of a Grief Conference,” Bryan said.

He still has a “damaged” picture of the 1958 national championship team that has three autographs — Rupp, assistant coach Harry Lancaster and Beck — that he got when his father took him to Nashville to watch UK play Vanderbilt and he went on the floor after the game to ask for the autographs.

“First John 2:6 is the verse he placed beside his autograph,” Bryan said about Beck.

Beck’s first wife, a registered nurse, was diagnosed with “rapid moving” Hodgkin’s disease that there was no cure or even treatment for in the 1950’s.

“We knew her time on earth would be short lived,” Beck said. “Adolph bent over backwards to make her feel welcome the one year she came to Lexington. He spent hours with her in his office in private conversation. I was never privy to them and my wife never shared what Adolph said. It was a total confidential relationship.”

Beck said the public image of Rupp was viewed as non-forgiving by some fans and a racist by others, but the private image of the coach was very different.

“I saw part of Adolph Rupp as a player under very challenging cir- cumstances that the public never saw,” Beck said. “He became more than a coach. He was not just my mentor, but my friend.

“Anytime she (Beck’s wife) was able to be with the team, he treated her like a queen. I remember in Atlanta when we were playing Georgia Tech. She got out of the hospital in Macon (Ga.) and ate with us at the pregame meal. You didn’t do that. Adolph’s wife never ate with us.”

Beck’s wife died his junior year after the NCAA Tournament (UK lost in the second round in Lexington to Michigan State). Both Rupp and assistant coach Harry Lancaster made the drive to Georgia to be part of her funeral service.

“The next day they were back in Lexington for our basketball banquet — I wasn’t there — and he (Rupp) talked about her and what she meant to the team. He dedicated the 58 season to her,” Beck said. “That was part of the cohesiveness that brought our team together even closer.”

Tennessee junior Grant Williams, the likely SEC Player of the Year again this season, knows his team’s 71-52 win over UK last week in Knoxville likely won’t be the last time the teams play.

Last year UK beat the Vols in the SEC Tournament title game in St. Louis and the two could meet in the SEC tourney semifinals or final next week in Nashville.

“It would be fun if there was a rematch. You expect to play guys like that in Nashville and the tournament,” Williams, who had 24 points and seven rebounds in the win, said.

“You never know when we’ll see them again. I feel like we will, and again, it’ll be another crazy environment. If you’re a competitor, you love to play in it. You’re going to be excited, you’re going to be ready to go, and just like last year, we played them three times. Hopefully, it’s the same this year.”

Williams said the Vols felt they “didn’t really compete” at Lexington. He said that was not UK’s problem in Knoxville.

“I feel like for them they really tried to be aggressive. Maybe they have a little bit of doubt because some shots didn’t go in, but I think they really competed,” Williams said. “For us, we were playing selfishly. I wouldn’t say they played that way.”

Tennessee coach Rick Barnes said it would be a mistake to write off UK’s postseason chances because of the loss in Knoxville.

She admits she did not always embrace the journey. She thought going to the Olympics “was the norm” and didn’t fully appreciate what qualifying for five straight Summer Olympics meant.

“I was just doing what I loved,” McKenize, who came from Houston to join UK’s staff after Lonnie Green was hired as head coach, said. “Now I realize it really was a major accomplishment to have the endurance to do that. I just didn’t realize then how big it was. I just thought everybody did it. I guess I was just a crazy person.

“My first Olympics (in 1996 in Atlanta), I cried the whole time. I was the baby on the team. I ran the semifinals of the 4×100 relay because I had got second at the (national) Trials in the 100 to get on the team. Then they didn’t let me run in the finals and I cried. I said this would never happen again. I could have chosen to never go compete again. Instead, I chose to make sure next time I was No. 1

She finished third in the 100 and 200 at the NCAA Championships as a freshman at Georgia. The next year she was second in both events.

“My junior year I did not know what was going on with my body. It got so tight I could not move and train. I had to redshirt, and I cried,” she said. “It’s like putting a horse in a stable when all it wants to do is run. I made a promise to myself to stretch properly, hydrate properly. I came back and won the NCAA in the 100 and 200. That was my dream. I didn’t know if it could happen but I made sure every day I was on the track or doing something to take care of business. That’s the message I make sure my athletes understand.”

Kentucky fans planning on going to the SEC Tournament in Nashville might want to make plans to attend the Greater Nashville UK Alumni Club pep rally March 15 at the Wildhorse Saloon at 120 2nd Avenue North. The pep rally will start three hours before UK’s scheduled game that day.

The pep rally will have live music by Hannah Ellis and Halfway to Hazard, raffle items, merchandise vendors and appearances by the UK pep band, cheerleaders and dance team before UK plays its first game. Food and drink will be available for purchase.

Cost is $10 for members and students who pre-register, and $15 for non-members and those registering that day. Children 12 and under are free.

Holmes, 38, has won almost $25 million in his PGA career but his sister, Amanda Rowland, still gets nervous watching him play like she did when he secured his latest win with a difficult two-putt on the final hole.

“It is nerve-wracking but exciting at the same time,” Rowland said. “It’s actually more fun to be at home watching (on TV) so I can cheer for him and against others. You can’t do that at the course unless it is the Ryder Cup. I just always want him to play his best so if he wins it’s because he plays his best and if he loses it’s because somebody else just beat him.”

Holmes now has an infant son and his sister says he’s learning to balance family and golf.

“ You can earn more money the more you play but you can never get time back that you are away from family,” Rowland said. “He is not 23 any more. There’s a strategy to taking time off and not burning out.”

Holmes’s recent win puts him back in the Masters for the fifth time — he tied for fourth in 2016 and has made the cut three of the four times he’s been in the field. He did not qualify for the Masters last year.

Rowland and her husband, Aaron, have been to the Masters and will go back again this year.

“ It’s a beautiful golf course. They take such great care of it,” Rowland said. “It will be special for him because this will be the first one for his son, Tucker.”

However, whether he’s winning and earning a trip to the Masters or not, Rowland loves watching her brother play.

“I would watch him play putt-putt. There’s not a better human being and I am very honored to be his sister,” she said. “He’s also very appreciative of all the support he gets from Kentucky fans no matter where he plays.”

Quote of the Week: “We got to keep recruiting dudes. We can’t bring in the wrong dudes. Same plan Mark had to build this thing, we better stay on that same plan or we will go back,” Kentucky associate head coach Vince Marrow on how UK football can keep going forward under coach Mark Stoops.

Quote of the Week 2: “To be honest, we haven’t discussed that one bit. Coach Cal has not discussed it one bit with our guys. You can probably ask them. They probably don’t even know how many teams are in the NCAA Tournament,” Kentucky assistant coach Joel Justus on whether UK coaches and players think about NCAA seedings.

Quote of the Week 3: “He changed the game so much and playing the right way. Being a shooting guard that can do a little bit of everything — facilitate, score, true winner. He’s done it all. So he’s a big inspiration for a lot of two-guards. I know the people that know the game know how important he is to the game,” Devin Booker on NBA legend Dwayne Wade.