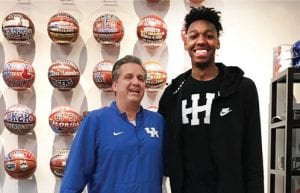 University of Kentucky head basketball coach John Calipari made it clear last week that James Wiseman remains his No. 1 recruiting target. Wiseman is also being heavily recruited by Memphis.

“One thing that definitely stands out to me is Ashton doesn’t take games off. He plays hard all the time and kind of reminds me of (Alabama point guard) Collin Sexton that way,” Peek said. “He just loves the game and wants to win every time he steps on the court.

“Sometimes at this level you see players who know they’re talented and know they can be the best player on the court but they choose to take plays off or even full games off sometimes. That drives me crazy.”

Kentucky signee Keldon Johnson has a similar no-nonsense approach that could work well with Hagans if he is able to re-classify from the 2019 to 2018 recruiting class as he hopes.

While there has been some speculation that Green might transfer, Peek believes Calipari could make the crowded backcourt work.

“Kentucky now has too much talent in the backcourt and that is a great problem to have. Finding the right duo for the job and getting the chemistry right will be the biggest challenge next year,” Peek said.

“Ashton is one of the most aggressive defenders I’ve ever seen play the game and he’s super explosive on offense. He has a tight handle like Shai Gilgeous- Alexander but will still need some developing at the next level. I think Quickley and Quade can play either the one of two but Ashton is a pure point guard.”

Hagans and five-star forward E.J. Montgomery, another Georgia player, both verbally committed to UK in a 24-hour period. The 6-10 Montgomery could be the perfect fit for what UK needs next season.

“E.J. had glimpses of greatness during the McDonald’s All-American practices. There were a couple times he surprised everyone in the gym with a put-back dunk or a nice block and it’s surprising because he’s such a quiet kid,” Peek said.

“He’s not very vocal on the court like Keldon Johnson and Immanuel Quickley, so when the quiet players do something ridiculous it always draws a reaction. He’s tough in the lane but also has a nice mid-range jumper. I would say he’s not as strong as PJ Washington but his outside game is much better.”

Many were surprised that Kentucky coach John Calipari was able to add both Hagans and Montgomery. There had been national attention paid to how Duke’s recruiting had surpassed UK and then Calipari landed two-five star players in a day.

“Nothing ever really surprises me about Kentucky anymore. They were looking like just an OK recruiting class — in the coach Cal era standards — and in a matter of 24 hours they added two five-stars and jumped Oregon for the No. 2 spot in the team rankings right behind Duke’s powerhouse class,” Peek said.

“Ashton committing was a little surprising but there had been whispers he was going to reclassify after he de-committed from Georgia earlier this year.

“You can’t discredit Duke for what they pulled together this year, but Calipari has made a little bit of a statement. It will definitely be interesting to see how both coaches make it work with all this young talent coming in next year.”

Peek also noted that with the way Calipari is continuing to recruit it would not surprise her to see one, or even two, more additions to next year’s UK roster.

Five-star forward James Wiseman has been a recruiting priority for Kentucky for more than a year. He’s the top-rated player in the 2019 recruiting class and many still speculate that he might reclassify to the 2018 class no matter how many times he denies it.

John Calipari and his entire coaching staff watched Wiseman play last week on the first day coaches were allowed to be out observing players. He had already made a home visit with Wiseman.

Wiseman is on the same AAU team — Bluff City Legends — with 2019 UK commit D.J. Jeffries and Adair County point guard Zion Harmon, one of the top players in the 2021 class.

Hardaway has already signed point guard Alex Lomax, who played at Memphis East last year with Wiseman, and is also recruiting Memphis East forwards Chandler Lawson and Malcolm Dandridge, who both play with Wiseman on the Bluff City Legends.

Wiseman played at the Marshall County Hoop Fest in December long before he knew Hardaway would become head coach at Memphis. He raved then about Kentucky and Calipari.

“I am a competitor, and Kentucky likes that. Kentucky does a lot of pick and pop with bigs, so I would fit in his (Calipari’s) system,” Wiseman said. “Fans here (at Marshall County) want me to come to Kentucky and I like how excited they are about me.”

He also said then it was “great” playing for Hardaway.

“He has been teaching me and trying to build up my game a lot. He’s really good for me,” Wiseman said.

Wiseman will be good for Calipari or Hardaway. Other coaches would like to get involved, but it’s not likely Wiseman will really consider any other school even though he lists Kansas, North Carolina and Vanderbilt as possible college choices. Jeffries might also be intrigued by the chance to play for Hardaway even though he made his verbal commitment to UK right after Hardaway was hired at Memphis.

One other note — the more Calipari watches Wiseman and Jeffries, the more he will see Harmon. The Adair freshman attended Big Blue Madness and already has a lot of big-time offers, even though Kentucky has yet to offer. Maybe watching him with Wiseman and Jeffries will tweak Calipari’s interest, even with the way Calipari seems to be stockpiling point guards.

Former three-time Kentucky state golf champion Emma Talley is a full-time member of the LPGA Tour this season but she still remains true to her Caldwell County roots.

“I am the same person but definitely I get a lot more golf questions when I go back home now,” she said. “Everyone is great. I was living in Birmingham until about two months ago but I will be living in Princeton during the off weeks now. I will be home a lot more this year.”

She will definitely be back May 11 to again participate in the Tee It Closer To A Cure Golf Scramble at Paxton Park Golf Course. The event benefits Crohn’s and Colitis Foundation of America. This will be her fourth year to participate in the event (registration is available by calling 270-331- 5023 or by email lammmtc@bellsouth.net.

“Both my trainer and one of my coaches at the golf complex there (in Paducah) have Crohn’s (disease), so this is a very important event to me,” Talley said. “I will have a couple of prizes donated by the girls out here (on the LPGA Tour). I play a hole with each group and really have fun doing it. I get to see everyone I grew up with and also meet some new people. It’s just a good day that I really, really enjoy.”

Kentucky signee Immanuel Quickley is going to be the kind of “servant leader” that coach John Calipari says he values.

Quickley is hosting a basketball clinic Saturday. Cost for the clinic — a $5 donation with all proceeds going to the local Boys and Girls club in Baltimore. The event will include a community all-star game where Quickley will team up with McDonald’s All- American teammate Jalen Smith — who is also from Baltimore — and other high school friends to challenge community leaders. Another $5 donation will also benefit the local Boys and Girls Club.

Quickley said giving back has always been important to him and he doesn’t plan to change that at Kentucky. He said his visit to the Ronald McDonald House was one of the highlights of playing in the McDonald’s All- American Game.

“I just like giving back. I think it is important that we all do that,” Quickley said.

“I didn’t have class with him since he was a year ahead of me, but I had one study hall with him,” she said. “He was like the cool kid at school. He was fun to be around. He’s just a good kid.”

Both were extraordinary players, but she never practiced or worked out with him.

“I worked out with his cousin who is at Virginia Tech now but not him because he was kind of like big time. He had a lot of people wanting to work out with him,” Balogun said.

She watched Gilgeous- Alexander play often last season and anticipates he will do well in the NBA after recently declaring for the draft.

Quote of the Week: “To be smarter, be a better runner, become faster. I have a lot of growing to do and that’ll come in the film room,” Kentucky junior running back Benny Snell on his goals between now and the start of the 2018 season.

Quote of the Week 2: “He may end up taking other visits, but I know for certain it will not mean anything other than he is taking a trip. UK coaches have told him that is fine. He is coming in early. He understands what is in front of him at Kentucky,” former UK defensive back Maurice Douglas on his son, Moses, staying loyal to UK commitment.

Quote of the Week 3: “Maybe the years wash away many things about players from our past. He was a special talent who could shoot, score and board with anyone. In my all-time great lists,” former UK All- American Mike Pratt on UK teammate Dan Issel not named on lists of college basketball’s all-time best players.