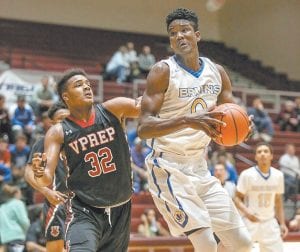 DeAndre Ayton is one of the top players in the 2017 recruiting class and the 7-footer has started hearing more from UK in recent weeks. (Photo courtesy Commonwealth-Journal, Somerset)

Not sure anyone should be surprised that Kentucky sent back over 1,000 tickets for its game against Alabama October 1 in Bryant-Denny Stadium in Tuscaloosa.

Kentucky has not played there since 2008 but figures to be a decided underdog against the defending national champion. Plus, the seats returned by UK were for the top eight rows of seven sections in the south end zone upper deck. Each seat costs $78 plus a $5 charge per order and another $5 to have them mailed.

That means it would have cost a UK fan $88 for one ticket to sit at the top of Bryant-Denny Stadium and likely watch Alabama roll over the Cats.

By comparison, Alabama is selling tickets for games against Western Kentucky, Kent State and Chattanooga for $48 each and they each come with a $10 voucher for concessions or souvenirs.

During a talk to the Louisville Quarterback Club, then-offensive coordinator Neal Brown told the group that one of the most talented players in Kentucky’s 2014 recruiting class was Charles Walker of Louisville St. Xavier.

What made that statement so unusual was that Walker was a preferred walk-on, not a highly touted, four-star scholarship player.

Walker has certainly shown he was no ordinary walk-on the last two years. He’s played in all 24 games, including one start, and had 12 caches for 61 yards in 2015, returned three punts for 22 yards and had six special teams tackles.

His story is even more unusual because he played mainly running back at St. Xavier but had little trouble making the transition to receiver at Kentucky. He rushed for over 1,000 yards as a junior and added more than 500 as a senior when he missed five games because of injury.

Walker said he felt at home with coach Mark Stoops and his staff when he decided to turn down other scholarship offers to join the UK program.

“I felt the most at home with them and felt they were being the most honest as far as a preferred walk-on. My brother also was going there,” said Walker, who also played basketball and baseball in high school. “I did what my team in high school needed me to do. I knew I was not big enough to play running back in the SEC. I didn’t play slot (receiver) that much in high school and coaches couldn’t see the routes I could run.”

However, Brown invited him to a Kentucky football camp. He met then receivers coach Tommy Mainord and said the coach “loved me” immediately. Brown and offensive line coach John Schlarman came by St. X often and convinced Walker to become a UK walk-on.

“Coach Stoops said it did not matter if you were a walk-on or not. If you proved to him you could play, you would get in the game,” Walker said. “I had a chip on my shoulder. I knew I could play. I worked my tail off, but I’ve always been a hard worker.

“I am surrounded by great players on offense and defense. They bring in players capable of making plays every year. It’s just another chip on shoulder knowing there are more guys I have to compete with for playing time. If I slack off, somebody is right behind me. You have got to be afraid of what is behind you and compete.”

He proved that during spring practice when he competed with a cast on his arm, something that impressed new receivers coach Lamar Thomas.

“It made catching a little tougher, but in the long run it helped me concentrate even more,” Walker said.

Walker knew Thomas because he considered going to Western Kentucky and Thomas was an assistant there then before going to Louisville.

“I liked him a lot then and still do,” Walker said. “He brings energy and helped me get in the right mode for practice. People get excited, but practice is different. He has brought a spark with him that carries over to practice. And no matter what defensive back you are going against, he still expects you to go up and catch the ball. Every coach has times when he will holler and scream, but he’s never negative. Even if he is on you, it’s just because he knows you can do better.”

“It doesn’t surprise me one bit with him. Charles is a player. He makes a lot of plays on special teams,” Stoops said.

It’s no shock that Walker says he loves special teams.

“It’s another play where you can cause a fumble, get the ball. Returning punts last year was awesome,” he said. “Tackling is just instinct. Growing up, everyone plays both ways. I think the last time I played defense was in the eighth grade. My senior year I played a little safety. But I like to tackle.”

De’Aaron Fox scored 3,113 points during his high school basketball career for Cypress Lake High School in Texas and averaged 32.4 points per game as a senior.

Yet he admitted he was looking forward to his freshman season at Kentucky due to the talented teammates he’ll have.

“I really enjoy playing with more talent, just because it takes a lot of pressure off you,” he said. “I don’t have to do as much. I can actually play harder. Playing with the best players, it makes your game a lot easier.

“One of my goals was to try to reach 3,000 points, and I ended up doing that. But we didn’t make state, which was the ultimate goal. It’s all about winning.”

He knows Kentucky coach John Calipari will push him just as he has other point guards he’s sent to the NBA.

“The point guard is supposed to be the extension of the coach on the floor. It will be a lot of weight on my shoulders but I can handle it,” Fox said.

He paid close attention to what Tyler Ulis did last season. “His mouth doesn’t stop moving. He’s always talking, always telling people what to do because he knows what spot where everyone is supposed to be. Him and John Wall are probably going to be the toughest guards to live up to at Kentucky,” Fox said.

“Living and working in Tennessee, I was able to see him coach quite a bit,” Dortch said. “People said he was just a recruiter, and I knew that was not true. I have to dive deep into statistics and his teams always did well in defensive field goal percentage and rebounding. Those are old-fashioned stats, but his teams were always among the national leaders and those are effort stats.

“He was also averaging 30 wins a season. I knew he was a good coach with effort stats like that and then at Kentucky he would be able to consistently recruit the best players anywhere. It just seemed like a perfect fit.”

Yet even Dortch admits he never anticipated quite the success Calipari has had at Kentucky.

“Kentucky fans are disappointed he has not won the national title more, but that’s hard to do and he has chosen a difficult path to do that with so many one-and-done players,” Dortch said. “Who would not want a team full of fivestar guys, but that can be difficult blend and get them to all buy in. But he’s always done it and by February and March, his teams are always a title contender.

“He’s done as well as anybody could expect considering that there are more good teams and more good players spread around now. I really think he will close his career at Kentucky. He would be stark-raving mad to go to the NBA.”

Count me as one glad to see that Kentucky is getting involved with 7-footer De- Andre Ayton, easily one of the top three players in the 2017 recruiting class.

Coaches have had concerns about his academics and potential to play overseas next year rather than go to college. However, time after time Ayton has said his academics are fine and he’s working to keep them that way and that he has no intention of doing anything other than going to college.

Kyle Weaver, his coach at Hillcrest Academy in Arizona, has nothing but praise for Ayton.

“He is a great kid. He is a leader, a fierce competitor. You won’t find a tougher guy in the country. I am not lying.

I will vouch for that kid until the day I die. It doesn’t matter who he is playing, he is going to fight no matter what and he expects everyone else to. He raises the intensity of our team and picks up all the other guys,” Weaver said.

“Teammates respect him because of that. That is what you need from your leader and top guy. That makes my job easier. No matter who we are playing, he will dive for balls, he will rebound. He plays 32 minutes and there won’t be a loose ball or rebound he won’t go for.”

Weaver says Ayton is “built to be a professional player” and is working to make sure that happens.

“He’s got the motor. He has all the intangibles that most athletic big men, or athletes in general, don’t have. He has a work ethic higher than any other basketball player I have seen,” Weaver said. “He’s going to be someone to be reckoned with in future.”