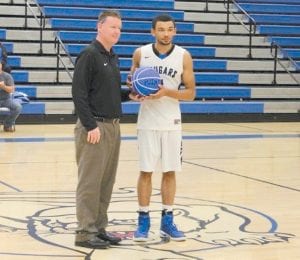 “He’s been with me two years and he’s the best I have seen,” said Arnold.

This from a coach who had Mario Manningham, who went on to play for Michigan and in the NFL won a Super Bowl with the New York Giants, as well as former Ohio State star Maurice Clarett.

Bowden could play a lot of positions because of his size, speed, athleticism and toughness. He played quarterback for Arnold and last season ran for 2,277 yards and threw for 1,366 yards while accounting for 57 touchdowns. The 6-1, 185-pound Bowden had one playoff game where he ran for 370 yards and six scores on 24 carries and threw for 106 yards and another touchdown.

“When he has the ball in his hands, he can beat you with his feet or arm,” Arnold said. “I think he’s probably a slot receiver in college, but you can put him in a package as wildcat quarterback. From the slot, he could run sweeps or bubble screens. He has huge hands. He has deceptive power and speed.

“His biggest attribute is he is a kid who hates to lose. He’s been gifted with great ability but couple that with his spirit and the thing that goes unnoticed, and you couldn’t know until you coaches him, is that his football IQ is off the chart. Put all those components together and you have something really special.”

Kentucky figures to have an entertaining game with South Carolina Saturday in Rupp Arena. However, odds are the halftime show will be even more entertaining.

That’s when the Firecrackers, a jump rope performance team made up of fourth through eighth graders from Kings Local School District in Ohio, will put on their annual show for Kentucky fans. Coach Lynn Kelley founded the team and now has open tryouts — and two-hour practices five or six days per week — for the girls who perform at major college and NBA games as well as other special events across the country.

But year after year, the girls insist that Rupp Arena is one of their favorite venues to perform.

“I enjoy performing at Rupp Arena because of the setting and how large it is, is very cool. Other arenas don’t treat us the same as you guys do,” said eighth-grader Morgan Hubbard, a fourth year Firecracker. “I love how we get to ride on the UK bus. I really appreciate how everyone treats us and it is and honor to perform for UK. The UK fans are a great crowd and they always motivate me to perform a great show for them.”

Kentucky always sends a bus to Ohio to pick up the jump rope team — something other places do not do. Kentucky also gives each girl a “swag bag” with gifts.

“The UK fans know us so well that they cheer so much for us and their reactions always make you smile for the rest of the show once you see them,” sixth-grader Sophie Miller, a third year Firecracker, said.

“Performing for UK is by far my favorite. The crowd is amazing. They get so into the show, making it so much fun,” Peters said.

Saturday’s show could be even more entertaining based on what eighth-grader Sydni Baker shared.

“I always look forward to going to Rupp Arena because the crowd is always super excited to see us come and the crowd goes crazy when we perform. This year our show is even more challenging, so I can’t wait to see how they react,” Baker said.

It might be as much fun to see how first-year Firecrackers enjoy their time performing in front of 23,000 fans.

Third-grader Corina Macy isn’t even sure what Rupp Arena is.

“I know my mom used to work at UK and she is a fan. I like to perform at the games. This will be my first time at UK,” Macy said.

I wondered if the Firecrackers would like to get UK coach John Calipari’s autograph. The overwhelming response was yes. However, I thought you might enjoy what Macy and Moore thought.

Oh well. It doesn’t matter because Kentucky fans in Rupp Arena will all know who the Firecrackers are and by the time the game is over, the girls will all know Calipari as well.

From the time she stepped on the court at Kentucky, Makayla Epps knew there would be comparisons to her father, former UK point guard Anthony Epps.

She didn’t mind because her father has had a huge influence on her game. However, she also thinks of him in a bit different manner.

“Me and him are a lot the same. My mom says I am like his twin. It’s crazy because he’s male and I am female. We are 20 years apart but we are so similar with actions, emotions,” the Kentucky senior said.

“It is father-daughter when we talk but (teammate) Evelyn Akhator thought that he was my big brother. She never really knew. We just have a relationship where we can go a long while without talking but the love is still there. He texts me after big games, and if we lose like after Louisville he sent me a text that really uplifted me. It’s just small things he does as a dad. We are so similar it is kind of scary.”

Her father has had to make himself stay quiet during games — or at least most of the time. He catches himself wanting to coach her, but knows that is not his place or job.

“There have been times where he has been in Memorial (Coliseum) and like the ball went out of bounds or we are going to a timeout. I will look up and the camera will be on me and then on him. I am like, ‘I wonder what they are saying on TV?’” she said.

“He always has this face where he is staring. No idea what he is thinking. My dad is not a quiet person. He was a player and is a coach and dad. His coaching instincts are going to want to take over but I think he has done a real good job of restraining himself.”

“He better ask me to do one now, too,” Vitale said. “But I think it is great Rick and John did one together. People can talk all they want, but (even though) they are competitors they have ultimate respect for each other. They know how to motivate, inspire and run a program. There’s no doubt about that.

“On the sideline they want to knock each other off. They want to beat each other. I think the winner is the state of Kentucky to have two quality leaders like that.”

I actually watched Vitale coach his final college game. It came in Rupp Arena in the NCAA Tournament when he was coaching Detroit. The Titans won 26 games that year, including 21 in a row. They beat eventual national champion Marquette during the year and had three future NBA players that Vitale recruited. After that win, Vitale danced at midcourt as he told his team he would.

Detroit beat Middle Tennessee in the NCAA first round to reach the Sweet Sixteen in Rupp Arena against No. 1 Michigan. I remember the passion Vitale had on the sideline and all he did to get the UK fans at the game pulling for Detroit.

“I was getting the crowd all fired up,” Vitale recalled as we talked about that game. “We were the little guy. It would be like Western Kentucky playing Kentucky. We were Detroit playing the University of Michigan and they were No. 1 in the country and had great players. It was heck of a game. We got beat in the last minute, but it was a great game.”

It was. Michigan won 86- 81 but Vitale earned a lot of respect that game and I never forgot the passionate, intense coach who turned up on ESPN a few years later — and is still there.

“Until my dying day, I will believe we cost Michigan that national championship because we played them in such an emotional game and they didn’t have anything left for UNC-Charlotte in the regional final,” Vitale said.

“They came to Wesleyan and said they really liked me and I was able to score really well and do a lot of things well. I am excited they saw me play and said I was a good player and at least could see a little bit in me. That’s big,” Wiggins, who played in the McCracken County Mustang Madness, said. “Kentucky is a great program and it is an honor just to be seen by them. They are such a big deal.”

Former Maryland star Keith Gatlin is Wiggins’ coach. He’s seen schools such as Arizona, California, Maryland and Providence all offer scholarships recently and expects many more offers to be come.

“Aaron is the real deal,” said Gatlin. “He’s 6-foot-6, he’s long and he can handle it. He can shoot it really well, too. He feels likes he belongs now and he’s taking advantage of it.”

Wiggins missed first seven games this season with an ankle injury but has now hit his stride. He showed off his shooting range at Mc- Cracken County.

Malik Monk is trying to become the first freshman to lead the Southeastern Conference in scoring since Chris Jackson did it for LSU in 1989 when he averaged 30.2 points per game. Only two other freshmen have ever led the league in scoring.

Quote of the week: Kentucky sophomore Isaiah Briscoe was recently asked if he ever loses sight of the rim when he drives inside against bigger players. His answer was a classic.