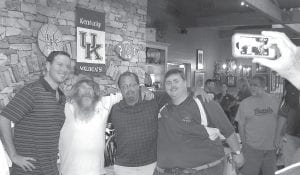 Matt Jones (pictured at left above and at right) was in Whitesburg on June 28 for a live two-hour airing of his Kentucky Sports Radio call-in show. The program, which airs weekday mornings from 10 until noon on WTCW-AM, aired from Pine Mountain Grill to a crowd of more than 100 University of Kentucky sports fans. In the photo above, Jones poses with a group that included WTCW sportscaster Larry Hatton and station manager Kevin Day. At right, Jones has his photo taken with UK student Savannah Baker of Whitesburg.

What’s the old saying? Things are never as bleak as they appear to be nor are they ever as rosy as they may appear. The University of Kentucky was forced to play a lot of freshman last year and had a lot of key injuries happen early in the season. Translated in my eyes they weren’t as bad as the final 2-10 record indicated.

With that being brought to the table first in this week’s column, there has been a lot of talk about this 2013 UK team having the added challenge of facing a difficult schedule in Coach Mark Stoops’s first year at the helm with a roster limited in experience and SEC-type talent.

Yes, it’s going to be a tough task to pull wins out of several of these games, but tell me any time in recent memory when the supposed lower level SEC teams have had a weak or even a slightly manageable schedule? Now, I’m not going to make my preseason predictions today — not until I can get a clearer picture of what lies in front of UK football opponent-wise this fall. 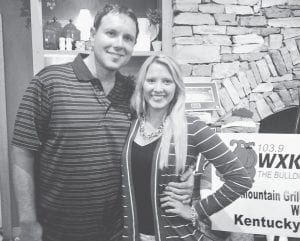 Personally, I think a lot of this tough schedule talk is coming from this simply being the rotation year that Alabama comes on the schedule. That’s just one game out of 12, folks.

Also, I think a lot of these remarks about only seeing two, three or possibly four wins is because people can’t get last year’s team and record out of the back of their minds and can’t picture UK having a more experienced and different skill set at several different positions and — oh yes — a quarterback that is ready for the Air Raid offense.

I will say this: Looking at several of the teams on the 2013 schedule, let’s just say the following teams listed below just don’t put immediate fear in my eyes:

• Miami of Ohio at home. Supposedly one of those two or three guaranteed wins the pigskin gurus are predicting.

• Mississippi State on the road. The Bulldogs lost their QB and top running back, besides this game annually comes down to the 4th quarter. Whoever can win it usually takes the game barring turnovers.

• Alabama State at home. Do I really need to give reasons why UK will win this one.

• Vanderbilt in Nashville. The Commodores lost their QB and other key players. As I said in an earlier summer column, three of those five SEC wins were against the most inept offensive teams ever at UK, UT, and Auburn.

• Missouri in Lexington. The Tigers didn’t look imposing last year. UK actually whipped them the first half then fell apart in the second half with turnovers.

• Tennessee, also at home. Many veteran SEC scribes are painting the same picture for Butch Jones as they are for Mark Stoops, and the game will be in Commonwealth Stadium.

• Louisville in Lexington. Yes, the Cards beat the Gators 33-23 in the Sugar Bowl. However, it was a Florida team that didn’t even want to go to New Orleans after losing out on a shot at the BCS championship. It was an eerily similar situation to when Howard Schnellenberger beat Alabama in the Fiesta Bowl several years ago. The Tide had no ambition to play let alone win that year either. Also, this is going to be pretty much the same Louisville team that lost to Syracuse and UConn down the stretch last year and beat those football powerhouses of South Florida, UC, Rutgers, Southern Miss, and FIU by 2, 3, 3, 4, and 7 points.

Fact of the matter is, if you could have taken four plays out of the 2012 U of L season, the Cards could have easily been 6-6 or 7-5 and begging a minor bowl for a bid. But the ol’ oblong ball bounced the Cards’ way last year in several games.

It will be interesting to me to see how Stoops’s first team comes out of the gate in the WKU and Miami of Ohio games. If they do as I expect and win each game by a comfortable margin, I’m betting everybody jumps on the bandwagon all of a sudden including our friends out in Vegas and our annual Battle of the Bluegrass game will suddenly become dangerously winnable by the aforementioned humble and inept Cats with the likely top-10 Cards dropping to a shall we say meager 7- to 9-point favorite.

You can throw out Alabama and Florida at home and South Carolina and Georgia away. I’ve not lost my complete sense of reality.

As we draw closer to the Mark Stoops-Bobby Petrino confrontation, has anyone noticed there has not been any announcement by WKU or UK about television, only that the game will kick off at 7 p.m. EST and 6 p.m. CST?

Here is a quote from a UKAA official who will remain nameless. I spoke with him via e-mail Friday July 5. “As far as I know, Ira, the UKWKU football game at this point will not be televised.”

Surely our friends down in Bowling Green aren’t holding out on the television rights in hopes of a sellout. Got to admit it’s taking on the looks of another Bobby Petrino sabotage toward UK. WKU and the Sun Belt conference hold the rights package, according to the UKAA official I spoke with.

Be careful what you ask for, Coach Petrino. With Mark Stoops’s popularity at fever pitch your actions may end up producing a hard sellout, but with a large tinge of blue in the seats at LP Field in Nashville and end up making it Commonwealth Stadium south on August 31.

Columnist Ira Combs lives in the community of Jeff in Perry County, where he operates Tri State Sports Media Service Inc. with his brother Harold.