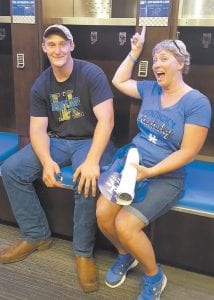 In most years Davonte Robinson would have been the marquee in-state player in Kentucky’s football recruiting class.

He led Henry Clay in tackles for three straight years (he had 100 tackles and one interception as a senior) and was the top-rated defensive back in the state with offers from Georgia, Louisville, Notre Dame, Ohio State and many others along with UK.

He was a Class AAA 100-meter dash state champion as a sophomore and helped Henry Clay win team titles in 2015 and 2016.

Sometimes he played offense and scored seven touchdowns, including one on a 91-yard kickoff return.

But UK’s 2016 recruiting class included in-state players Landon Young of Lafayette, Drake Jackson of Woodford County and Kash Daniel of Paintsville. All three were U.S. Army All-Americans and the talk of the Bluegrass, especially since they all committed to Kentucky early.

“It never bothered me,” Robinson said about the lack of attention he often received from media members and UK fans. “We are a team and are all going to the same school. We are just here and we are going to represent Kentucky. I am happy for them to get that attention and I just hope we get the wins we want. I don’t really like that much attention any way. I am kind of low key.”

“Davonte is a great athlete. There is a reason Notre Dame offered him a scholarship and recruited him so hard,” Jackson said.

He says not to overlook receiver Zy’Aire Hughes of McCracken County, either.

Like the other in-state freshmen, Robinson decided staying home and playing for UK was by far the best for him. 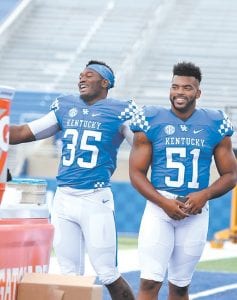 Denzil Ware, left, and Courtney Love could be two big playmakers for the UK defense this season. (Photo by Olivia Prewitt)

“It is like my backyard. I have grown up here and lived here my whole life. It’s always been a dream to play in the SEC. This is my opportunity and I took it,” Robinson, who said his favorite UK player was safety Winston Guy, said. “It is fun. It is like a brotherhood already. I am getting real comfortable with the coaches and rest of the team. I am just happy to be here.

“I grew up a UK fan and fan of some other teams, but this is where I wanted to be. My whole family is UK fans. I just grew up around UK fans and I sort of just grew up being a UK fan. I had all the UK gear.”

He has several high school teammates who are joining the team as walk-on players, too.

“I can help bring them in here and teach them and they can teach me things as well. It is fun to stay with people, but it is also fun to meet new people. I have the best of both,” Robinson said.

He knows playing time could be difficult this year with sophomore cornerbacks Chris Westry and Derrick Baity returning after superb freshman seasons. He says playing special teams would be “great” if he cannot get on the field in the secondary. 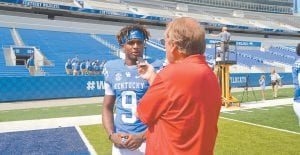 Davonte Robinson had scholarship offers from Notre Dame and Ohio State among others but has been often an overlooked as a top UK recruit. (Photo by Olivia Prewitt)

“Chris and Derrick have taught me a lot. They are great guys and great players. I look up to them,” he said. “They are like my older brothers, so whatever they can do to help me I am going to take it in and use it to try and make myself better.”

. A few days after she attended the Kentucky Football Women’s Clinic, Angie Young joined me on The Leach Report to talk about that and her son, UK freshman offensive lineman Landon Young.

She insisted not only was she nervous, but she did not want to embarrass her son.

So how did she do?

“I thought she did really good. I was proud of her. She didn’t stumble too much and I didn’t think she was as nervous as she thought she would be,” said Landon Young.

“I sort of have been trying to help her. She has heard a bunch of my interviews and kind of takes tips from those because she’s heard so many. As I have progressed through football, I have had to be fluent and have had this media training. She did really good using some of that.”

Does that mean he coached her before the interview?

Bam Adebayo’s high school coach, Brandon Clifford, says he has never coached a more talented player but that Adebayo also understood the intricacies of playing basketball far better than most.

“He comes from a different mindset,” Clifford said. “All he knows is to go get the ball and play hard. That’s a product of where he’s from. He’s from an area where he has had to work for everything. That work ethic has been instilled in him. He was raised so well by his mother than no success changes him.

“He’s just from a small town here in North Carolina, but since he signed with Kentucky he has become somewhat of a celebrity. However, he’s the same guy I first met. That makes me very confident he will be successful at Kentucky because success has not changed him. He’s so gifted he does not always have to bring it to be successful, but he always does. That’s who he is.”

But other guys also play hard. Why he is a rebounding machine, or “beast” on the boards as John Calipari once said?

“He is 6-10, 265 (pounds). Take that with freak athleticism — he can run, he can jump, he’s s super coordinated. But what makes he him such a good rebounder is that he just has an instinct to kind of read the basketball. He reads it off the rim and pursues it like every rebound is his,” Clifford said.

“ He’s a super quick jumper. He can come down and go back up quicker than some can jump once. He has shown he can rebound against the best players in the country as well as small Class A basketball players in North Carolina. He has just has a nose for the basketball and in college he will finally be able to get physical. In high school, if he hit somebody, they moved and he got cheap fouls.

“When Cal is on him every day, he will just be a phenomenal rebounder. He just wants the ball more than most people do and Cal understands that.”

Want to know what it was like to be a black football player in the Southeastern Conference at the University of Kentucky 50 years ago?

He’s a former Kentucky placekicker who was on the Kentucky team when the Wildcats had players breaking the color barrier.

“What we saw them go through and endure … we shared their pain,” said Jones. “They even had some issues with players on the team that I was not aware of for years.

“But we were not thinking about history being made. We were just trying to win football games.”

Jones remembers a night game at LSU in 1968. He kicked a first-half field goal to give UK a 3-0 halftime lead before the Cats lost 13-3.

“We went back to the hotel to spend the night. You didn’t fly right back home like teams do now,” Jones said. “The coaches gave us money to go to a restaurant and eat. We had our pregame meal in a room together, but after the game we were going out to eat.”

That did not turn out well but became a lasting memory for Jones.

“We went to a restaurant and sat down. Wilbur Hackett and Houston Hogg were sitting there and you could tell the waitress was almost embarrassed when she came over and said, ‘Sorry, but we will not be able to serve you,’” Jones said.

“That was a shock to all of us. We got up as a team in mass and walked out as a team. We went hungry that night. We were raiding the snack machines in the hotel. But we were not going to eat where they would not serve our teammates. It just was not right and I’ll never forget that.”

Jones is a retired Florida high school principal but one of his students was Kentucky sophomore linebacker Denzil Ware. Jones first met Ware when he was a sixth-grade student.

“His family was in turmoil when he came to us. He never played on our middle school football team even though the coaches loved the way he looked,” Jones said. “But everybody fell in love with him. Teachers fell in love with him because he was a fine young man. This was long before anyone knew he would be a Division I football player or maybe had NFL talent. He was just a great kid, and still is.”

Jones pushed him to succeed not only athletically, but also academically. Jones came from Florida to Kentucky for Fan Day weekend to see Ware and see family in Kentucky.

“I can just see a world of difference in his self-confi- dence from a year ago until now,” Jones said. “The way he carries himself on the field is a lot different than last year. I think he was actually a little bit scared when he went on the field for his first game last year. I think he was a little intimidated then. Now with a year under his belt, he’s ready to go. He’s still humble, but he’s very confident.”