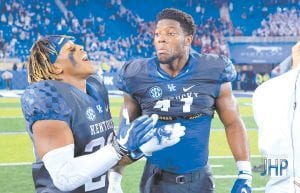 Josh Allen, right, celebrated with Benny Snell after UK beat South Carolina to move to No. 13 in the national rankings. Allen now has 20 ½ career sacks and Snell 40 touchdowns going into Saturday’s game at Texas A&M. The game airs on ESPN at 7 p.m. (Jeff Houchin Photo)

Senior linebacker Josh Allen admits he came back to Kentucky for his senior year in part because he believed the Cats could have as special season just like they are having. Kentucky is 5-0 for the first time since 2007, ranked 13th in the nation, and heads to Texas A&M this week with a chance to go 4-0 in Southeastern Conference play.

Texas A&M has two losses, but they are to Clemson and Alabama, two teams considered likely college football playoff participants. The Aggies are not ranked but Kentucky is still the underdog – again.

“I have never played there. I want to see what it is about,” Allen said. “But we are going down on a business trip. We know it will be loud and jumping but we have a team full of veterans and we’re ready for that.

“Defensively we are just controlling everything (Kentucky is third in the country in scoring defense) and I am loving it. I came back because we had something special here. I feel like we can really make a run for everybody. We feel like nobody can beat us. Just get on this train and roll it until we get to the top.” 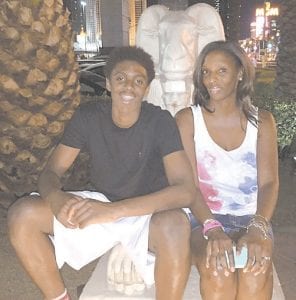 Denise Maxey (right) encouraged her son Tyrese Maxey (left) to reclassify to the 2018 recruiting class, but he wanted to finish high school with his friends. He will be in Lexington next season.

“Have you seen anything to make you think this Kentucky team isn’t for real?” Rogers said.

“He has a big heart. You can tell by the videos you see of him that he just loves to have fun playing basketball but also when he is not playing,” said Denise Maxey. “He’s laughing and comfortable with himself on the court. He tells my husband that the court is his playground. He grew up in an era where kids don’t go play outside, so when he got to the basketball court that became his playground.”

Maxey averaged 22.9 points, 7.7 rebounds, 3.7 assists and 2.4 steals per game to lead South Garland High School to the Class 6A semifinals last year and was one of the leading scorers on the Nike summer circuit. He also played for the USA team that won the FIBA Americas under 18 championship this summer.

“He has played organized basketball since he was four years old and played on a team of six to eight year olds,” Denise Maxey said. “He played a little bit of softball but he was not a big fan of the heat. He played quarterback but in sixth grade we pulled him from football so he could focus on academics.

“He was at a magnet school at the time with a very high academic focus. He wasn’t very happy with me. He will still talk about that today, but he understands now why I did not want him to play. That was not the happiest time but now the benefits have paid off. He has a great grade-point average.”

That academic focus was one reason Maxey had the option to reclassify to the 2018 recruiting class if he wanted. Instead, he chose to stay in high school another year and hopes he can win a state title. 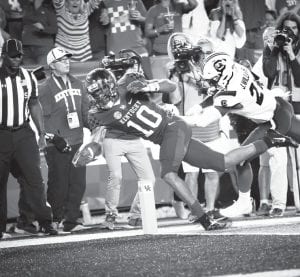 “He told us he just wanted to stay with his friends,” his mom said. “We actually did our best to push him to leave (high school) early. But it was his choice, his life and we did not want to do anything where he one day might say, ‘My parents made me do this.’ He loves his friends. He’s Garland born and bred. He loves the city. He wanted to finish what he started with the guys he started it with.”

That’s a similar scenario Anthony Davis chose for his senior year in Chicago. He stayed at his small school with childhood friends to play on a basketball team without a lot of other talent. Still, he came to UK, won a national title, was the No. 1 overall draft pick, and is now one of the NBA’s elite players.

“So many prep schools reached out to us. But his thinking was why go away when he had all he wanted here,” Denise Maxey said. “He didn’t see much need to go to a prep school or to leave school early here for college. His teammates have all been friends since second grade.”

Where Maxey lives students can go to any school they choose. In junior high Maxey and his current high school teammates all opted to go to the same school. South Garland was the only school opening and Maxey’s father was also one of the coaches there.

“ They had always played against each other but thought they could come together on one team and win a state championship,” Denise Maxey said. “They almost did last year but had a heartbreaking loss in overtime in the semifinals. He won’t talk about it but he broke the state record set in 1972 with 46 points in that game. He was amazing.”

“Sometimes I watch him and think he’s done a good job. Other times I’m even amazed by what he can do,” she said of Tyrese. “I know Kentucky fans are going to love him as a player because of the way he plays. But I also hope they love him for who he is, because he’s really a good kid with a big heart and he’s going to enjoy BBN a lot.”

What is it like to be Benny Snell’s backup, especially when the backup is in the same recruiting class and played high school football in the same state?

“He’s best running back in the SEC. I have learned a lot from him. I am always asking him questions. I ask him what I can do to get better,” said Kentucky redshirt sophomore A.J. Rose.

Rose was a standout in the Cleveland area while Snell, who now has 40 touchdowns and over 3,000 yards rushing, was from Columbus, about two hours away.

“I had heard of him in high school but didn’t really know him until we got here,” Rose said.

How did recruiting coordinator Vince Marrow convince two running backs – who both scored touchdowns in last Saturday’s win over South Carolina that moved UK to 5-0 — so talented to both sign with UK in the same recruiting class?

“Vince is a great recruiter. He just told us be a family and you just had to stick with it,” Rose said. “It was rough my first year. Coaches stayed on me and then I earned their trust and now I feel good.”

Going into their freshmen season, coaches weren’t sure whether Snell or Rose would play. Neither played the first two games before Snell got the call and went on to rush for over 1,000 yards.

“It was tough not getting to play but Benny came in and worked. He learned everything real well. It took me a little longer. Everything happens for a reason, but now we are both doing all we can to help us win,” Rose said.

He will be back playing in the Marshall County Hoopfest Dec. 1. Last year Memphis East played two games in the event but this year will only play one game.

Wiseman has already made an official visit to UK and was at Kansas last weekend. He’s scheduled to visit Vanderbilt — he is a Nashville native — on Oct. 12, Memphis on Oct. 19, and Florida State on Oct. 26. He continues to insist he will not make his college choice until the spring and also denies it is strictly a two-team race between Memphis and UK.

He left for the NBA after one year at UK despite missing the final part of the season with an injury. He was a lottery pick but has struggled to make a big impact so far.

The Thunder signed him as a free agent and he’s excited about what lies ahead.

“I definitely like it’s the cycle of the NBA. Opportunities will be there. You just got to be ready, especially an opportunity like this in Oklahoma with this great organization,” Noel said. “ I think there’s a great position for all of us.

Oklahoma management did not make him think it would be easy for him to earn a significant role with the team but he liked that challenge.

“Just accepting challenges, and that’s how I’ve been my whole life. Just taking things right on. I knew coming here that there would be some challenges and guys — certain things would be demanded, and I was 110 percent ready for that,” Noel said. “This team is definitely built, I think, the right way with the right pieces of guys that can really complement off each other and just go out there and play their own game just naturally. That’s another reason why I was really so attracted to this situation.”

Quote of the Week: “He comes over sixth period and works with the sixth grade language arts teacher and mentors kids. It’s just a testament to the type of character he has. He feels it is important to come back where he went to middle school and give back to our kids. As good as he is on the field, he’s that good or better just as a kid,” middle school principal Casey Sparrow on Western Hills star football player Wandale Robinson.

Quote of the Week 2: “He is real strong. Seeing him be so strong actually boosts me up because whenever you are feeling down about being on scout team, I just look at him. If he’s pushing, I am pushing. I love him. He’s a cool dude and a tough dude,” UK walkon running back Dee Smith on teammate Josh Paschal who has skin cancer and has not been able to play this season.

Quote of the Week 3: “When we win games and state championships that will bring colleges just to watch us all play. Coach (Chuck) Smith has coached at the SEC level (for Kentucky) and knows what it takes to play at that level. He has connections all over the place. Every college knows who he is,” Boyle County junior receiver/defensive back Reese Smith on how former UK assistant coach Chuck Smith helps his recruiting.