UK has been recruit’s ‘dream school’ 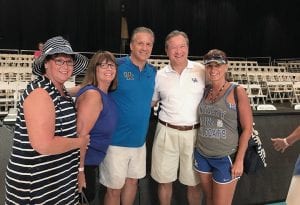 Guy Ramsey, director of stratetic communications for UK athletics, knows fans like these fans with John Calipari in the Bahamas are “who made UK sports” what they are.

Alonzo Crowder was not surprised when New Jersey five-star wing Kahlil Whitney verbally committed to Kentucky, because the star player had not even started high school when he let Crowder know UK was his “dream school” even then.

“I have known Kahlil for the last four years. He played for me coming out of eighth grade,” said Crowder. “We really liked him then as a student-athlete and you could see the raw potential in him. We cultivated a relationship starting at that point and his family decided to allow him to come where I was coaching in high school.”

Whitney played one season for Crowder at Solorio High School in Chicago and averaged 17.6 point, 3.5 rebounds and 1.8 assists per game before moving to New Jersey to live with his father. He now plays for Roselle Catholic High School in New Jersey and has already been projected as the No. 3 pick in the 2020 NBA draft by nbadraft.net going into his senior year of high school.

“It didn’t catch me off guard when he committed because he’s been talking about Kentucky from when I first met him,” Crowder said. “It just dialed my memory back to when he told me it was his dream school.

“I told him what I wanted to do was give him more skill sets so that could happen. He is so freakishly athletic. I told him I knew he could be a great player and wanted him to have all the pieces so he could play on the floor like Kevin Durant or Carmelo Anthony.

“I told him if he really wanted to go to Kentucky, he had to put in some serious work and he has been for three years. I wanted to give him some great players to aspire to be like so he would know he had to work extra hard even as a 14-year-old kid.

“When he let me know he had committed, I thought it might possibly be Duke. When he said SEC, I told him I already knew who it was because of his love for Kentucky.”

Whitney grew up watching Chicago natives Anthony Davis and Tyler Ulis star for Kentucky. Crowder said when Whitney got to New Jersey he “got to rub shoulders” with former UK standout Michael Kidd-Gilchrist.

“Plus, Coach Cal has a great reputation for getting guys to the next step (NBA) and that certainly was attractive to him as well,” Crowder said.

Crowder was only a secondyear head coach at a non-powerhouse Chicago high school when Whitney opted to play for him rather than a traditional power. The coach said they helped each other build their brands.

“We developed him and got him going and then everybody starting noticing he was going to basically an unknown basketball school,” Crowder said. “But that’s him. He’s a different type of animal. He just wants to be the best. He didn’t want to play with other great players he knew. He wanted to compete against those guys.

“Cal said one of Kahlil’s most attractive traits was his competitive edge. I knew when he came to play for us he was a different type kid. He’s one of those guys that wants to put the team on his back.”

Crowder said Whitney was blessed with big hands, great athleticism and a non-stop motor. The coach said he viewed Whitney like a Bentley, a luxury automobile.

“It takes six months to design a Bentley and put it on the road,” Crowder said. “It took four or five months to work on Kahlil’s skill sets. He was able to put the ball on the floor, shoot the mid-range shot, hit a 3. I knew he had all the pieces. We just had to polish things and he changed tremendously from his eighth grade year to his freshman season. When he decided to move to New Jersey with his dad, they took the next set of steps to make him even more elite. He’s going on his third year there and he’s an even better player now.”

Crowder said he’ll always appreciate the trust Whitney’s mother and grandparents had in him and he developed a close relationship with the family.

“I did my best to do right by him and them and make sure he was protected when he was with me,” Crowder, who is now the head coach at Crane High School in Chicago, said. “We spent a ton of hours in the gym. We watched games. We went out to eat after workouts. We maintained a connection even when he went to Jersey. I get to see him on the (AAU) circuits. We text and stay in touch. I check in on him to see how things are going.

“I’ve already told my wife we have to go down to Kentucky for some games when he gets there. For him to get the chance to play on that big stage is going to be an amazing experience for him and for Kentucky fans to get to see him play.”

Freshman linebacker DeAndre Square has made an impression with his play since arriving on campus in January and says junior linebacker Kash Daniel has been a “great” help for him.

“He has helped me with film, going over the playbook, keeping my head straight, letting me know about practice and how to keep going,” Square said. “I would have been lost without him.”

“Coming in (to college) he was not as big just like me. He told me to work and the weight will come,” Square said. “It’s pretty hard work in the weight room. The eating part is probably the hardest part. I eat a lot but I have a fast metabolism and I am lactose, so it goes away pretty fast. Gaining weight is not easy for me.”

Shelby Valley freshman Cassidy Jo Rowe recently gave her verbal commitment to Kentucky, but turns out she’s not the only talented basketball player at the school.

“I think he is the best kept secret in Kentucky,” said Shelby Valley coach Jim Hicks. “He is definitely a Division I prospect and I believe he should be a Mr. Basketball contender in 2020.

“He’s still got two years left and I know there are Division I schools where he can play. It just depends on how hard he works as to how high he can go.”

Guy Ramsey, director of strategic communications for UK athletics, knows some Kentucky fans feel disconnected and believe UK no longer cares about the “average” fan based on ticket, parking, donation and other issues.

However, he says Kentucky athletics knows fans are what make UK sports special and that won’t change.

“Money does go a long way and is a lot of the reason we can do what we do but it is far from everything when it comes to fans,” Ramsey said. “We recognize the best thing we can do for fans is win. The best customer service is to win games no matter where you are sitting. That’s why we have been building facilities to let student-athletes do that and it shows over the last 16 years.

“To us, fans are fans. I know there is a perception out there that believes that is not the case but regardless of anyone’s opinion the blue blood and passion fans have is the same regardless of who you are. Fans are who made UK sports. We know that.”

He says if fans have a complaint or question, tweet @ukathletics or call the main UK tickets office where “their job is customer service.”

He says problems with seating in the new UK baseball stadium are similar to those UK encountered with the football seat relocation three years ago and will face in the renovated Rupp Arena going forward.

Bryan Hudson grew up going to University of Kentucky football games, visited Kentucky numerous times and was offered a scholarship by Kentucky coach Mark Stoops when he was a sophomore. He also lives in Scott County, which is only about 20 minutes from the UK campus.

Yet the Scott County senior offensive lineman has already decided he’ll play his college football at Virginia Tech, not Kentucky. Of course, he also turned down Alabama, LSU, Ohio State, Notre Dame and Florida among the 24 total scholarship offers he had.

So why Virginia Tech over UK?

“Actually, to be honest, I didn’t pay much attention to Virginia Tech or hear much about Virginia Tech growing up. They offered and the more I looked into it and got to know the coaches and visited, I just fell in love with it and how much of a football school they are, the game day atmosphere, the school itself,” Hudson said. “Everything just kind of fit me better than anywhere. Not that other schools did not fit, but that was place for me.

“I really liked the UK coaching staff, the football team. Even though it is so close to home, it never really felt like somewhere that I felt I needed to be.”

Does Hudson, and other football recruits, see UK as only a basketball school then?

“I wanted to be play at a football school, somewhere … it’s hard to put into words. I just felt Kentucky was more of a basketball school, so I felt like Virginia Tech fit me better,” Hudson said. “Football is the main sport at Virginia Tech, and I liked that.”

Quote of the Week: “The past 33 years really don’t matter. The past four years don’t matter. But we don’t need them for our motivation. That’s for sure. We’re plenty motivated about what we’re doing in our program and the way we play,” Kentucky coach Mark Stoops on trying to end the losing streak against Florida.

Quote of the Week 2: “We were blessed to have had a great playing experience in two special places. First was Memorial Coliseum, which I thought was the greatest atmosphere you could ever want to be in. Then UK took it to another level at Rupp Arena. I have some great memories at Memorial Coliseum and also at Rupp. Both were very unique and special,” James Lee, a member of UK’s 1978 national championship team, on playing both in Memorial Coliseum and Rupp Arena.

Quote of the Week 3: “Louisville was here playing a different event. Rick Pitino walked through, didn’t talk to anybody. Had security around him like he was a big deal. Calipari just walked through with his wife, shook hands, talked to everybody. It was unbelievable the difference,” SEC Network analyst Dan Dakich comparing the way John Calipari interacted with fans in the Bahamas compared to how former Louisville coach Rick Pitino did.