The 6-7, 220-pound Illinois standout is not a top-10 national recruit, but Fenwick High School coach Staunton Peck believes his star has an unlimited future.

“When he faces adversity or hardship his response is not blaming issues on anyone else. Instead, he just works to get better,” said Peck. “That’s a big part of the reason he keeps getting better.

“He is 6-7, 220 (pounds) but has guard skills. He handles the ball like a point guard. He has a real good first step getting to the rim. He has a great combination of size and skill. He is a mismatch problem. If he has a smaller guard on him, he is comfortable cutting to the post and finishing physically at the rim. A bigger guy on him has no chance to stay with him on the perimeter.

“He is very physical finishing at the rim. Guys bounce off him. It’s not just drive to the rim and dunk. He can be creative. He has a strong spin move to finish at the rim. He can also shoot the 3.” 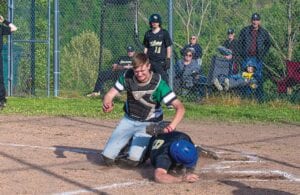 HELPING HIS TEAM — Jenkins catcher Keegan Bentley applies the tag on a play at the plate to record an out in recent baseball action. Bentley is one of two seniors on the Cavalier baseball team, along with teammate Landon Mullins. The Cavaliers, who have one win on the season in a victory over Cordia, were scheduled to play at home Wednesday and again on Friday before finishing the final week of the regular season on the road. (All photos on this page by Chris Anderson)

Want more? Peck says he also has great vision that makes him a good passer to add to his feel for the game. Peck recalled a game where the game’s final play was designed for Peck but he drove and drew three defenders.

“He kicked the ball to the best shootertomakea3towinthe game and conference. That shows his ability to understand the game. When he was younger, he might have just jacked up a 3 himself,” Peck said. “He’s more than just a scorer. He is a playmaker.”

Others are noticing. At the Allen Iverson Roundball Classic last week in Memphis, ESPN NBA draft analyst Jonathan Givony got his first in-person look at Hopkins and liked what he saw.

“Kentucky commit Bryce Hopkins had a great day. First time seeing him; just a good all-around basketball player. Did some really interesting things defensively, made a bunch of shots, and is a really smart and unselfish passer. Exactly what Kentucky needs at that position,” Givony said. 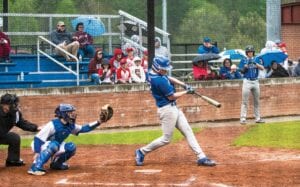 SAC FLY — Letcher Central senior Canaan Cunniff makes contact with the ball during a recent win over Shelby Valley. Cunniff hit into a sacrifice fly on this play, driving home the Cougars’ first run of the 8-6 win. The Cougars held a 12-11 record on the season going into action Tuesday.

Peck called Hopkins a “manchild” because of his physicality.

“ He does not get pushed around. He does a good job using his length and physicality on defense but is also a smart defender,” Peck said. “I had him guard inside guys because I didn’t want him to use all his energy on the perimeter running around. He’s a good rim protector and anchored our defense. He jumps straight up without fouling.

“At the end of our season he really emerged as a leader and just finished his career on a real, real high.” s

Kentucky basketball fans were thrilled last week when former assistant coach Orlando Antigua returned to Kentucky — the place he called “Camelot” in his first press conference back at UK. 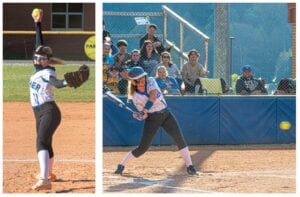 LADY COUGARS IN ACTION — Letcher County Central softball pitcher Alyssa Nicely (left) is among Kentucky’s top 25 pitchers in earned run average, ranking No. 15 with a 1.20 ERA. Above left, LCC’s Raygan Anderson is one of three Lady Cougars seniors, along with teammates Gracie McDougal and Madison Parsons. LCC is 14-6 on the season going into action at home Tuesday against Harlan.

He’s been gone from UK seven years and was head coach at South Florida and most recently assistant coach at Illinois. He says he’s changed as a coach since his five years at UK when the Cats won the 2012 national title and made the Final Four two other times.

“I’ve got a better appreciation now having had the opportunity to sit in that seat (head coach). To know, not quite know, but a better idea of what is coming at Cal, what he has to do, and our jobs as assistants is to try and take things off his plate,” Antigua said. 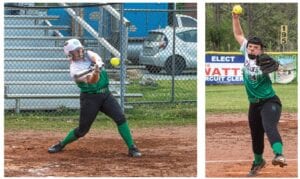 GOING, GOING, GONE — Jenkins freshman Alexis Ritchie (above left) crushes a pitch for a solo home run in a recent 10-0 win over Cordia. Ritchie was 2-2 in the game, also recording a triple. Above right, Jenkins pitcher Kristin Thacker is also among the state’s top 25 pitchers in earned run average, coming in No. 24 with a 1.33 ERA. The Lady Cavaliers had a record of 8-10 going into action Tuesday.

Problem is times have changed recruiting-wise since Antigua was at UK. There was no G League then to compete against for top recruits.

“But you can’t use a brush to paint all of them. Each individual family has different circumstances that they have to weigh and what experience they’re trying to go through to get to their dreams. Some of the families are going to want the educational piece of it,” the UK assistant said.

“Some are going to want the value of sacrificing and playing on a team and playing and competing with other really, really good players and getting into an NCAA Tournament and making a Final Four run and potentially a national championship. There is extreme value in that.”

Antigua also has an appreciation for what the Kentucky experience can mean to players.

“There’s also extreme value in an unbelievable experience that happens when you go through that that you can’t put a price on. The kids that have been here and go through that, those experiences are going to outweigh anything they’ve ever done in their lives because it’s special,” Antigua said.

“It’s such a rewarding experience, and they’re loved in the state, they’re loved throughout history and then you get a chance to become one of those special groups that are endeared for life. Our job is to try and communicate how special that experience is when you come to a place like Kentucky.”

Just how good could Nebraska transfer Wan’Dale Robinson be for Kentucky next season?

The Wildcats certainly need a boost in the passing attack and the former Western Hills High School standout certainly showed at Nebraska he could do that. In his two years at Nebraska, Robinson had 91 catches for 914 yards and three touchdowns and ran 134 times for 580 yards and four scores.

“The Nebraska transfer and Swiss Army Knife will be the ultimate playmaker in the SEC and vault Kentucky back into SEC East contention. As a result, he’ll put himself in the Heisman race and make a push for a spot in New York as a Heisman finalist,” Sallee wrote.

“OK, that might be too much of an overreaction,” Sallee wrote. “But he was the buzz of the spring in Lexington, and when combined with dual-threat quarterback Joey Gatewood — who is a big-time threat running up the middle — this Wildcats offense could be extremely dangerous.”

“He’s going to be the truth. I believe that,” Paschal said after one spring practice. “He’s a humble guy. My locker is right next to him so I talk to him a lot. Today, he had a hell of a play. He jumped up between two defenders and caught a post and I was like ‘Wow, he’s going to be a special player for sure.’”

Wonder who the seven picks were in 1979? So did I. Here the players are with the round they were drafted:

In the last 10 years, former Kentucky players have played in three Pro Bowls and two have won Super Bowls.The highest draft pick was Randell Cobb in the second round in 2011. Larry Warford was a third-round pick in 2013 and Za’Darius Smith a fourth-round choice in 2015. All have made a Pro Bowl.

Danny Trevathan, sixth round in 2012, and Mike Edwards, third-round pick in 2019, have both been Super Bowl champions.

“Some of these guys we had drafted this year are going to have long NFL careers, too,” UK recruiting coordinator Vince Marrow said.

Quote of the Week: “I really do believe Kentucky football at the point where there ain’t no jokes any more. Days of jokes about Kentucky football are over. Look at the last couple of drafts and I think we will have more (draft picks) next year. We ain’t going to take a backseat to no one,” UK recruiting coordinator Vince Marrow on the future of UK football.

Quote of the Week 2: “They have been instrumental in the building of this program from day one, and they deserve a lot of credit for the success that we’ve experienced.They are dear friends who I’ll miss. I am grateful for the impact they’ve had on my life, which is bigger than basketball,” Illinois coach Brad Underwood on former assistants Orlando Antigua and Chin Coleman after they took jobs at UK.

Quote of the Week 3: “You have to have patience. When I was a younger coach, I’d lose my mind on players.That doesn’t make you better. You have to give players information. You have to have a relationship with every player on your roster. If you don’t, it doesn’t work,” Kentucky volleyball coach Craig Skinner on how he’s changed as a coach.