UK is ‘less than 100 percent’ going into Miss. State game 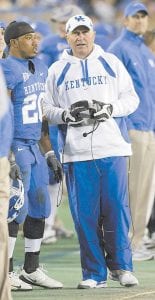 BANGED-UP CATS — Kentucky coach Rich Brooks talked with injured running back Derrick Locke on the sideline during the second half of their 36- 13 win over Louisiana-Monroe in Lexington Oct. 24. (AP Photo/Ed Reinke)

Rich Brooks took a sip of water, cleared his throat and tried to laugh when was asked if he was going to be able to take the field Saturday when Kentucky hosts Mississippi State.

The Wildcats can use any body they can throw out there now.

Brooks called this game the biggest of the season for Kentucky (4-3, 1-3 Southeastern Conference). And the Wildcats will be far from 100 percent when they face the Bulldogs (3-5, 1-3).

Lindley is likely to miss his fourth straight game with a high ankle sprain. Hartline has been slow to heal from a torn ligament in his left knee and Johnson — the team’s leading tackler — is “questionable to doubtful” according to Brooks after sustaining an isolated tear in the medical collateral ligament in his knee.

The Wildcats have managed without Hartline, using a unique three-headed attack at quarterback as Brooks splits time between Will Fidler, Morgan Newton and wide receiver Randall Cobb. The secondary has also survived in Lindley’s absence, with sophomore Randall Burden returning an interception for a touchdown in the second half of last week’s win over Louisiana-Monroe.

Getting by without Johnson, however, will be more difficult. Ronnie Sneed will probably fill in if Johnson can’t go. Brooks believes Sneed can play. He’s simply not sure if the 230-pound sophomore will have the same impact as the 258-pound Johnson.

“He just doesn’t bring that physical presence in that spot that No. 4 does,” Brooks said of Sneed.

The Wildcats will need all the size they can get against the Bulldogs. Mississippi State boasts one of the top rushing attacks in the SEC behind 235- pound senior Anthony Dixon, and the Bulldogs will almost certainly attack Kentucky’s lackluster rushing defense, which ranks 90th in the country.

“We know they’re going to just try and come right at us,” said defensive lineman Corey Peters. “They’re a physical team and they like to pound it. We’ve got to stay disciplined.”

The Wildcats will probably have to be better than that against the Bulldogs, who have three close defeats to ranked opponents, including a 29-19 loss to Florida on Saturday.

A win on Saturday almost assures the Wildcats of a fourth consecutive bowl berth for the first time in the program’s history. A loss and they’ll probably have to beat either Georgia or Tennessee — both of whom have dominated the Wildcats for years — to extend their season.

“I think when you’re in the lower half of the league historically, to get to the upper half, you don’t have to just knock off some of those big boys, but you have to beat some of the guys that are like you,” Brooks said. “Mississippi State and Kentucky have been like each other for quite awhile and whoever wins has an edge up to climb that ladder a little bit.”