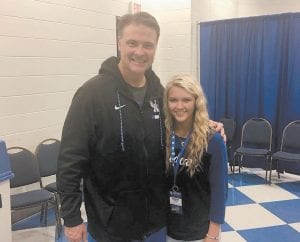 She might have grown up a Louisville fan, but Shelby Valley freshman Cassidy Jo Rowe already has a Kentucky scholarship offer from Matthew Mitchell. (Twitter Photo)

Once Cassidy Jo Rowe got a scholarship offer from Kentucky coach Matthew Mitchell, things got a little “crazy” for the Shelby Valley freshman.

“The local (TV) news channels starting making stories about me. It’s just crazy that so many people know me. It shows the hard work I put in and it was just an honor to get that offer,” said the eastern Kentucky standout.

She’s now got five Division I offers — before she ever starts high school. Murray, Northern Kentucky and Morehead all offered before UK. A few days after the UK offer, she got one from Denver.

Unlike most eastern Kentucky athletes, Rowe did not grow up a Kentucky fan. Instead, she’s been a Louisville fan.

“But since Kentucky showed interest in me, I started paying attention to them and their coaching staff has been so good to me,” Rowe, who played against incoming UK freshman Blair Green of Harlan County in summer ball, said. “Coach Mitchell likes the fact that I always hustle and the way I take charge on the court.”

Her father, Lonnie, who was recently named the new head coach at Shelby Valley after coaching the middle school team before, said you could likely count the Louisville fans in their area on one hand. However, one of them is Lonnie Rowe.

“I grew up watching Louisville in the early 80’s when Louisville basketball was fun,” Lonnie Rowe said. “What I liked, she liked when she was little. I take a lot of ribbing for being a Louisville fan. I am easy to get along with but I understand with all the trouble the men’s basketball program has had why I get some ribbing. But I never rooted against Kentucky. I am mainly just a fan of basketball.”

“No one really mentions my 3-point shooting but that is one of my best things,” Cassidy Jo Rowe said. “Usually everyone looks at me hustling, trying to make teammates better. But I work hard to be a good shooter.” 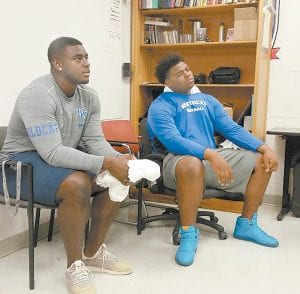 Her father never saw the UK offer coming so early.

“It shocked all of us. She performed really well in Chicago (for Kentucky Premier in AAU play) and UK coaches came to every game,” Lonnie Rowe said. “I knew they liked her but had no idea they would offer. It’s normal to get to know kids for down the road. They stayed in close contact with her last summer. So even though she’s been a Louisville fan, she was ecstatic to get the offer from Kentucky.”

Rowe tore the anterior cruciate ligament in her knee earlier this month. She knows the normal recovery period is six to nine months but hopes to return in time to play this season.

“It’s going to be tough not playing. I am going to want to work as hard as I can and they might have to tell me to slow down,” the Shelby Valley freshman, who had surgery last week, said. “All these offers are just motivation to get better and just knowing these people and coaches believe in me really motivates me to just keep working and get even better. We’ll see how it goes. I am not sure what I will do with my recruiting because right now my focus has to be on rehab and just getting back out on the court.”

She came home the same day she had the surgery and started physical therapy the next day on her own.

“She is one of the most self driven kids I have ever coached,” Lonnie Rowe said. “She has always been like that.”

Former Madison Southern standout Damien Harris, who rushed for 6,748 yards and 122 touchdowns in his high school career, picked Alabama over Kentucky and now has won two national championships going into his senior season.

“It was an honor getting to say I made it out and kind of putting the state on the map,” Harris said. “They’ve had other guys recruited since then. It was a great feeling, especially when Kentucky is looked at as a basketball state. That’s just kind of the mindset that it’s not really a football state. I’m glad to be where I am, but I’m also glad to be where I’m from.”

Harris opted to return to Alabama for his senior season rather than go to the NFL and now is projected as the top running back in the SEC — a projection that Kentucky junior running back Benny Snell obviously does not agree with (Harris and Snell were both named to the preseason all- SEC first team in voting at the SEC Media Days last week).

Harris says there no chance of any complacency for him or his teammates due to coach Nick Saban — much like UK basketball players say the same thing about John Calipari.

“No matter who we are playing, no matter what week it is in the season, whether we are playing a power five team or not, or whether we are playing in the national championship or not, one thing that we always focus on is just being the best team we can be,” Harris said at the SEC Media Days. “We are confident in the fact that if we play our best football, offense, defense and special teams, that we are capable of being the best team in the country , year in and year out.”

Harris also made it clear that Alabama players get the same royal treatment in Tuscaloosa that UK basketball players do in Lexington.

“There are just so many things about being a part of the University of Alabama and living in Tuscaloosa that bring us so much joy as athletes. Coming back for my senior year wasn’t hard.”

Now that is one difference from Kentucky basketball because Calipari seldom gets a player to come back for a second year, much less a senior season.

Tubby Smith thoroughly enjoyed being back in Lexington again last week to play in the PGA Tour’s Barbasol Championship pro-am and hopes to be back again next year.

“I would love to come back and I always come back any time they invite me,” he said. “I was really glad to get invited because this is really special for Lexington. We miss being here. I loved seeing all the fans. It was good to see some old friends.

“I spent a lot of years of my coaching career here. There are still a lot of ties to this area for me. It’s just good to be back.”

Smith was on Rick Pitino’s staff at UK and then led Kentucky to the 1998 national championship — he was back in Lexington in April for an autograph session with his national championship players — when he became head coach after Pitino left for the Boston Celtics. Smith eventually left UK for Minnesota and has also been head coach at Texas Tech and Memphis since then. Now he’s in his first year as head coach at High Point, his alma mater, that he says he hopes to grow into a “Butler-type program” going forward.

Smith has nothing but praise for what John Calipari has done with the Kentucky program and admits he would like for High Point to play UK.

“He has done an unbelievable job with the program. I’ve been very impressed,” Smith said. “I think they are really going to have a good team again this year, too.”

It might be hard to believe, but Kentucky actually ranks first in the SEC in returning defensive production. However, coach Mark Stoops knows as important as experience is, having a defensive front that can control the line of scrimmage is even more important.

“It starts upfront. I’ve said it from day one, we’re building. We’re recruiting. We’re doing the best we can to play at the level that it takes in this league,” Stoops said at SEC Media Days. “Great defenses in this league are dominated by defensive lineman. And we are getting much better. I feel much more solid about where we’ve been.”

He said sophomore nose guard Quinton Bohanna has him “excited” about this season and moving sophomore Josh Paschal from linebacker to the defensive front will be a big boost.

“He’s a guy you give him a biscuit, and he can get to 300 pounds, but he’s athletic enough to play on the edge,” Stoops said about Paschal. “I really love the way he’s playing the game. He’s very athletic, very twitchy. He makes plays.”

The good thing is that Paschal and Bohanna have older, experienced teammates to lean on.

“Adrian Middleton going into his senior year, he’s made some plays for us and been consistent, look forward to him making a big jump,” Stoops said. “We have a guy Phil Hoskins, who is very big, very strong. I love the energy, the attitude. I love how tough he plays. He’s twitchy, and he has some size. T.J. Carter is another guy inside.

“We have some bodies and that’s where we need to make the big jump. Across the board, I challenge all of them to play at a higher level and a much more consistent level, and I think we’re going to do that.”

It’s the type of “servant leadership” that coach John Calipari stresses to his players and Robic says what Tamme does is another example that can be used with the basketball players.

“We try to stress that you have to give back. I think our guys who have come through here and then moved on do give back and you see that in various ways,” Robic said. “They are fortunate enough to be in that position to be able to give back.”

Robic believes most UK basketball players understand they are fortunate to be at Kentucky but don’t always totally grasp how much they can help others immediately. However, many of Calipari’s former players have made significant contributions once they became established NBA player.

“To see them move on as young kids and come back as grown men is special. Coach tries to tell these guys it is more than just about the moment. It’s the big picture,” Robic said. “Financially many of them are in position where they can really help not only their families but their communities and cities where they are from. That is important for them. It means we have done something right and steered them in the right direction like somebody obviously did with Jacob.”