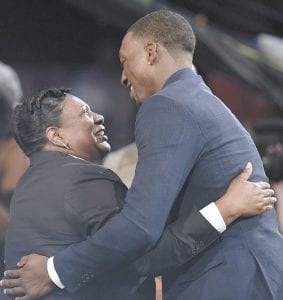 Former Univesity of Kentucky star Bam Adebayo wanted to take care of his mother financially, and now he can after being a lottery pick in the NBA Draft.

Remember not long ago when some wondered if Bam Adebayo had made the right choice by leaving Kentucky after his freshman season to enter the NBA draft?

Even as the draft approached, some mock drafts had him in the second round. Sure, Kentucky coach John Calipari said he could be a lottery pick, but the so-called draft experts were not saying that.

“I have spoken to quite a few (NBA) teams as they gather information. A lot of teams out there really like him,” Clifford said confi- dently then. “I will take their word over draft gurus any day. I know he is looking forward to playing at that next level and believes he can play well.”

Clifford knew one big question about Adebayo going into the draft was his outside shooting. Could he hit a 3-point shot — or at least a 15-foot shot — that he would have to make in the NBA?

Again, that did not worry Clifford who turned out to be exactly right.

“He’ll have a chance to show the other side of things in the NBA. Bam is a different kind of guy. Last year his job was to help Kentucky win basketball games. Now his job will be to be a professional basketball player,” Clifford said in early May.

He’ll do that for Miami after the Heat made him the final pick in the lottery with the 14th choice in last week’s draft. One reason Heat president Pat Riley, a former UK All-American, said Miami liked Adebayo was because he made 30 of 50 3-pointers in a workout and had a “great release” on his shot.

Riley also said Adebayo was “off the charts” from an athletic standpoint.

“Shot-blocker, explosive, a lob threat, jumper, a leaper, runs rim to rim, can guard 1 through 5. We felt the need to get an athletic big,” Riley said. “From a defensive standpoint, that’s where the emphasis came at that time. There were other ‘bigs’ that were available that had specific skills, but there were other things we didn’t like about them. I think he’ll be a perfect fit for us. But … he’s 19 years old … We are really excited about it, to be able to get him.”

Everybody should be happy for Adebayo. He had made no secret for several years that his motivation was his mother, who became a UK fan favorite with her passion and smile for Bam and his teammates. His goal was to make the NBA so he could take care of her financially — and now he can do that.

“When we sat and talked to Bam for an hour, you get blown away by his story, his background, his motivation,” Riley said after the draft. “When we talked to him, he had a level of maturity about him, a quietness about him that we really liked.

Clifford said the same thing for over two years. When Adebayo signed with Kentucky, he said motivating him to play hard and improve would be no problem because of his relationship with his mother. He also said that winning was all that mattered to Adebayo.

That’s why when UK needed him to provide in inside presence last season, he did. Karl-Anthony Towns did the same thing. So did Anthony Davis. Once Towns and Davis got to the NBA, they showcased more skills than most knew they had.

“His dream has been to be a professional player and he did enough last season at Kentucky to put himself in position to do that now,” Clifford said.

And in a better position than most thought he would be after proving that mock drafts mean little on draft night.

Some like to describe Kentucky freshman Kevin Knox Jr. as the same type of player as NBA star Kevin Durant because they are similar size, both shoot well from outside, and both can play multiple positions.

“It’s not fair to single out Kevin Durant or any player as his game is like,” said his father, Kevin Knox Sr. “Instead, I would say you are talking about a high caliber athlete who can defend multiple positions from the one to the four.

“We have done that on high level on Nike EYBL. He guarded (7-foot center) De’Andre Ayton. Kevin is a very explosive athlete, a person who can take off 6 inches from the free throw line and dunk or who can hit NBA 3’s or attack the basket.”

His father admits his son does watch players like Durant and Paul George to add parts of their game to his.

“I think he has some of several players in him and he’s always watching and trying to learn more things to add to his game,” Kevin Knox Sr. said.

He was proving he had done just that at the USA under-19 team tryouts until he tweaked a hamstring and had to withdraw from the tryouts last week.

Georgia quarterback Jarren Williams started playing quarterback when he was five years old. His father, Anthony, coached him in travel league play and took the team to places like Columbus, Ohio, and Dayton, Ohio, to play.

“A lot of kids that played with him are now Division 1 kids,” Anthony Williams said. “He just loves the game of football. It’s very competitive where we play. We are in 7A, the largest division in Georgia. Most teams we face have six or seven Division I players on the defensive side of the ball. But Jarren wants to put in the work to be great.

“He is a pocket passer who can extend plays with his legs. He is a pass first quarterback. He likes to throw and that is what he does best, but he can beat you with his legs (running).”

He’ll be at The Opening in Beaverton, Ore., June 28-July 3 along with 165 of best high school football players in the country. Williams earned his spot when he was among the top 11 quarterbacks out of 24 invited to the Elite 11 in Los Angeles.

“One of his goals was just to make the Elite 11 and it was very emotional for him after he was selected,” Anthony Williams said. “Jarren is driven by people telling him he can’t do something like make The Opening. Coaches told him he could not win Kentucky. All that did was motivate him to go to Kentucky even more. He is all about proving things to himself and others.”

Kentucky’s secondary went into last season with big expectations. While the unit played well, it did not play as well as coach Mark Stoops wanted.

Going into this season the secondary that includes Chris Westry, Mike Edwards and Derrick Baity is again being mentioned as a strength for UK. But Stoops isn’t going overboard with his praise — yet.

“We need to grow, we need to get better. When guys have success as true freshmen they go into their sophomore year and don’t always live up to it,” Stoops said. “May have been the case in the secondary (last year). We need to play better. That is my area of expertise and I will challenge those guys to play better this year.”

What about former four-star recruit Matt Elam, the in-state defensive lineman who picked UK over Alabama?

“Matt needs to have a great year. We had a sit-down in mid- April about things he needs to do. It’s up to Matt,” Stoops said. “He’s a good worker and does everything expected when he is with us. But there are sacrifices he has to make when he is away from the coaches.”

Translation: Elam has to watch his weight and fitness all the time, not just when he’s around the coaches.

When Mercer County basketball standout Trevon Faulkner did not have an AAU team to play with this year, his former coach managed to get him hooked up with 22 Vision. One of his teammates is Romeo Langford, one of the top players in the 2018 recruiting class with offers from Kentucky, Louisville, Kansas and many more.

“Romeo is a nice kid. It’s fun playing with him. He brings all the college coaches in,” Faulkner said. “That means a lot of coaches see me.”

The 6-4 Faulkner averaged 24.6 points and 11.9 rebounds per game last season. He shot 52 percent overall and 78 percent at the foul line but has been working on improving his 28 percent mark from 3-point range. Faulkner has scholarship offers from Western Kentucky, Northern Kentucky, Middle Tennessee, Wright State and Louisiana-Lafayette.

“I remember playing against him like in sixth grade,” Langford, who made the USA under-19 team coached by John Calipari that will play in Egypt, said. “We did not know each other, but once he got on the team he looked familiar. I kind of talked to him and figured out we played AAU against each other in sixth grade.

“It is real nice to have him on our team. He is a real aggressive guy, is able to get in gaps and create open shots for others. He has really impressed me.”

The feeling is mutual. Their team played Zion Williamson, another of the top players in the 2018 recruiting class with a UK offer.

“Zion is a man. He’s really good, but I think Romeo is better,” Faulkner said.

Quote of the Week: “They do not have my (cell phone) number. I don’t have to worry about coaches texting me or taking up my time. He takes care of that for me,” Romeo Langford, the No. 3 player in the 2018 recruiting class, on how his father helps take recruiting pressure off him.

Quote of the Week 2: “I think you should expect a better football team. We don’t ever put predictions on wins and losses, but we do expect to be better,” Kentucky coach Mark Stoops on the 2017 season.