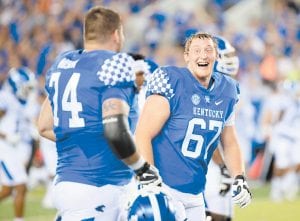 He played in all 13 games last year and made six starts at left tackle. Yet junior Landon Young says he only had a “decent season last year” and is hoping to be a much better player for Kentucky this season.

“The offseason was a lot of fun for me. I lifted a lot. That’s one thing I had to focus on was getting my body stronger along with my technique,” said Young. “Last season was not what I wanted it to be. My body was not where it needed to be. But a lot of lifting, working out, getting my cardio up, getting my technique sound and lots of reps will make me better.”

He’s been part of two bowl teams at Kentucky but wants more — a lot more.

“I think there is no ceiling for us. I think it is going to go exponentially higher after this and I think this is just stepping stones and building blocks on top of one another. I think it will just keep getting better,” Young said. “I came here to help change the program with a bunch of good guys and now adding more recruiting classes of fantastic athletes and all team guys — guys that you work well with in every group — only makes that easier. You can see the attitude and work ethic of the program increase. 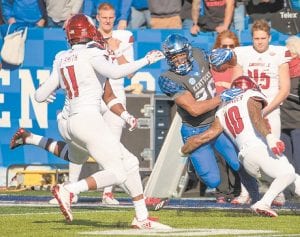 Kentucky junior running back Benny Snell has been ranked among the top 100 players in college football by Sports Illustrated. (Vicky Graff Photo)

“It is now about putting the finishing touches on a big year and even elevating the attitude more. We have a good head on our shoulders. We want to put in all the hard work we need and bring anyone having trouble up with technique, attitude, anything … bring them up with the rest of us.”

Ever wonder what drills an offensive lineman can do in the summer to make himself better? So did I, so I asked Young.

He says the drills usually involve other offensive linemen and they take turns holding pads and “beating the crap out of each other” during the drills. Young says Logan Stenberg and George Asafo-Adjei are the two linemen he doesn’t want beating up on him.

“Big George can lift the house and his punch is so violent and aggressive. Same thing with Stenberg,” Young said. “He is just a big human being at 320 pounds and he has a lot of mass behind him to push you. Those two are not my favorites (to go against) but we still like to go at it.”

He would like to take a go at playing tight end occasionally as he got to do in the bowl game last season to give UK more depth at the position and some extra blocking.

“They want to bring it back this year, or I hope they do. It’s a nice twist. Gives me a little change of scenery,” Young said.

“Oh, 100 percent. I probably have some of the best hands out there. O-linemen in general do but they never trust us,” Young laughed and said.

Going into last season the consensus among national college basketball analysts was that John Calipari likely would not have a lottery pick in the NBA draft. Kevin Knox was considered a possibility, but not a likely lottery pick.

Of course, not only did Knox go in the lottery, but so did Shai Gilgeous-Alexander — who was not ranked among the top 25 players in the 2017 recruiting class.

So who will be Kentucky’s best hope for a lottery pick in the 2019 draft, especially since skeptics already doubt if Calipari has a lottery pick on next year’s roster?

ESPN’s Myron Medcalf recently made his pick — freshman wing Keldon Johnson. He listed his top pro prospect for every major college team and had Johnson as his top pick at Kentucky.

“John Calipari’s fleet of five-star recruits features Johnson, a 6-foot- 6 wing who can explode through traffic or drive off screens. His size will help him play through contact, too,” Medcalf wrote. “With Reid Travis and P.J. Washington working with Johnson on pick-and-roll situations, the projected top-15 pick in ESPN’s 2019 mock draft could soar in his first and only season in Lexington.”

Obviously, a top 15 pick would put him in the lottery. Johnson was ranked behind Kentucky teammates E.J. Montgomery and Ashton Hagans in most 2018 class rankings.

Calipari is showing no signs of slowing down with his recruiting despite now having the consensus No. 1 team going into the 2018-19 season.

Kentucky already has commitments from Texas guard Tyrese Maxey and Mississippi forward D.J. Jeffries — who will play in the Marshall County Hoop Fest in December — in the 2019 recruiting class. Now five-star shooting guard Bryan Antoine has scheduled four official visits and one will be to Kentucky September 22. He’ll also visit Florida, Duke and Villanova.

The New Jersey standout is the top-ranked shooting guard in the 2019 class and a consensus top 10 player. About two months ago he listed Duke, Florida, Kansas, Kentucky and Villanova as his top five schools.

Antoine has had a UK scholarship offer for almost a year. He knows UK sophomores Quade Green and P.J. Washington and often talks with them even though the consensus has been he favors Duke, something he denied to Lexington Herald-Leader writer Ben Roberts recently.

Vernon Carey of Ft. Lauderdale, the top-ranked player in the 2019 recruiting class by Rivals, also has Kentucky in his final five choices. The 6-10, 270-pound center played on the USA under-17 team and also has Duke, Miami, Michigan State and North Carolina in his top five.

His father is a former NFL offensive lineman, so it’s no surprise his size and strength are phenomenal. But he has terrific skills and is a much better passer than most big men. He’s also a reliable scorer with a variety of moves.

But just like with Antoine, Duke is making a big push for Carey.

Kentucky also remains locked in what seems to be a two-team battle with Memphis for forward James Wiseman, one of the top three players in the 2019 recruiting class. He’s scheduled to be at Marshall County Hoop Fest again in December, too.

“Wiseman is that 7-footer with athleticism and enough skill to dominate a game in high school and impact a game in college immediately,” said ESPN recruiting director Paul Biancardi. “He is a true difference maker. He is not just potential — he is productivity. No matter when or how he cuts his lists down, we all know who the two favorites in the race will be.”

Two of the best players in Kentucky will go against each other in an early season showdown at the Marshall County Hoop Fest when host Marshall plays Pendleton County December 1.

Marshall County sophomore Zion Harmon, a recent transfer, led the state in scoring last year when he averaged 32.7 points per game for Adair County. Harmon helped lead Bowling Green to the 2017 state championship as an eighth-grader.

Pendleton County is led by senior Dontaie Allen, who averaged 31.8 points per game last year — third best in the state. He led the state in overall points scored.

Allen and University Heights senior KyKy Tandy, who will also play in Hoop Fest, are the frontrunners for 2019 Mr. Basketball and Harmon likely will be in 2021 — or in 2020 if he reclassifies as expected.

This will be Pendleton’s first trip to Hoop Fest and coach Keaton Belcher says it is a historic opportunity for his team — and Allen.

“The Allen versus Harmon matchup should be good for ticket sales. Both are exciting players that have bright futures,” Belcher said. “For our kids to be able to experience playing at the Marshall County Hoop Fest is something I hope they remember forever.

“Also, the opportunity to play against a well-coached Terry Birdsong team with a high caliber player like Zion Harmon makes our trip to Benton even more desirable.”

Allen got a scholarship offer from Vanderbilt during a recent visit and also has offers from Xavier, West Virginia, Virginia Tech, Western Kentucky and others. He also has received interest from both Kentucky and Louisville.

The 5-10 Harmon already has offers from Vanderbilt, Tennessee, Creighton and St. Louis, Kansas has shown interest and Harmon has made an unofficial visit there just like he has to Kentucky.

Sports Illustrated has Kentucky junior running back Benny Snell ranked No. 66 on its list of the top 100 players in college football going into the upcoming season. Snell is the 10th-rated running back but the top running back in the SEC and 15th-rated player overall in the SEC.

Not bad for a player who was not ranked among the top 50 running backs in his recruiting class.

Athlon Sports has Snell ranked as the 12th best running back going into next season.

Snell finished last season with a SEC-best 19 rushing touchdowns to go with 1,333 yards, third best in the league, when he had seven 100-yard rushing games. He set a school record for most rushing yards by a sophomore and became the first Cat to have back-to-back 1,000 yards in consecutive seasons.

He’s already eighth on the alltime UK rushing list with 2,424 yards. He could move to No. 2 past Moe Williams with 910 yards, but would need 1,412 yards to move ahead of Sonny Collins as the alltime leading rusher.

So what is a realistic goal for Snell this season?

“With him, there is no telling,” UK junior offensive tackle Landon Young said. “I think it will get higher and higher what he can do every year. He is an absolute monster.

“If we don’t make a hole for a guy, we are going to get a kidney shot (when he runs into us). He is a hard runner and if there is not a hole, he’s going to make a hole so that pushes us even more that we want to make holes.

“It’s sort of a self challenge within the line itself. We have a guy who has the capability to rush for way over 1,000 yards, so for us it is motivation that we helped with that but we want to keep continuing that. We have to be one of the best lines in the country if we have the best back.”

Quote of the Week: “Kentucky loaded again, like they’ve always been, but with a little bit of experience. I think Washington coming back was huge. I’m a big fan of him and his toughness. John likes this team, and he likes them in June. That’s scary for the rest of us. He usually doesn’t like them till March,” Auburn coach Bruce Pearl on P.J. Washington returning to UK and coach John Calipari being so high on UK already.

Quote of the Week 2: “You put this team together with the balance and experience they had from last year with the three guys returning, you got to think about winning a championship. Since they were 38-0 (in 2015), we haven’t really talked about a championship, but I think this can be that group if they can get chemistry this summer,” SEC Network analyst Antoine Walker on the upcoming UK season.

Quote of the Week 3: “He relishes rebounding, relishes defending and plays a very aggressive, attacking offensive game. At the same time, he’s someone who can knock down shots. He certainly has the physical dimensions of an NBA wing man,” recruiting analyst Jerry Meyer on UK freshman Keldon Johnson.