UK newcomer Tyrese Maxey seeking his piece of the bone 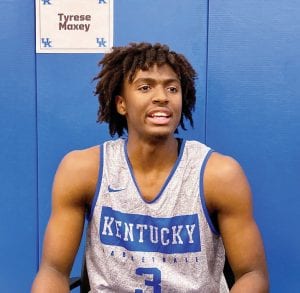 Tyrese Maxey has been thriving in practice, especially on defense. (Kentucky Today/Tammie Brown)

Tyrese Maxey is always smiling but don’t let that grin fool you.

Although an upbeat and personable player, the freshman guard hasn’t backed down from anyone on the team, especially veteran sidekick Ashton Hagans.

“It’s like two dogs and one bone,” he said. “Two pit bulls going at it … that’s how I describe it. We’re both very competitive and we don’t want to lose. It’s great and I love it. I think it makes us as a team better.”

Maxey said the two players “bite a lot” in practice, but are friends by the end of practice.

“We bite a lot — bite, scratch, crawl, all of it,” he said. “It’s amazing and we love it. At the end of the day, we can do all that on the court, argue, when we get back in the locker room, we’re like best friends.”

Much like Hagans, Maxey brings a defensive presence to the floor that makes the team that much better. Maxey acquired the desire to play defense at an early age.

“My dad was on me at a young age and so I think that around my sophomore, freshman year (in Hugh school), I started taking the initiative and really playing defense,” he said. “I started taking pride in who I was guarding and not letting them score. I’ve been pretty good with man-to-man defense and coming here, we have a lot of team-oriented defense and I feel like I’ve been getting a lot better.”

Aside from his defensive abilities, Calipari said his freshman guard also can score and reminds him of former guard Jamal Murray and is “really good in the pick-and-roll.”

“I watched in high school and I said he could be a triple-double,” the Kentucky coach said. “Because he can rebound, he can pass it, he can score, he can steal balls, I mean there’s a lot of things he does. And there will have to be a point where he’s got to step up and do the things he’s capable of doing.

“I like how he’s gone through this right now and he and Ashton are going at it and there are times I’m playing them together because they’re going to be playing together a lot. But he’s kind of like Jamal and if you want to compare them, I would say it would probably be Jamal as much as anybody else (I’ve coached).”

Although he already has a knack for the game on both ends, Maxey has experienced a learning curve, especially on defense, since he arrived on campus.

“What I have learned is that in college, you need to talk to each other, people need to know where you are, we’re going to keep getting better I already know,” he said.

Off the court, expect Maxey to be smiling at all times because of the upbeat and positive nature he possesses, a trait he learned from his parents.

“I think it’s just a mix of my mom and my dad,” he said. “It’s the way they raised me to be. If you wake up and get another chance at life, there’s no reason to be upset. So, I’m always happy. On top of that, I’m doing what I love every day, which makes it a lot better.”

An observer at Big Blue Madness in the past, Maxey will be all smiles during the event set for Friday night.

“I’ve been sitting on the sidelines watching it for two years,” he said. “I can’t wait to be a part of it. I like the energy in the building. They’re not really doing anything, just hanging out, doing a dance and a dunk contest. The energy is so high and everybody is having good time doing it. I just can’t wait.”