UK-Notre Dame will be game of lasts 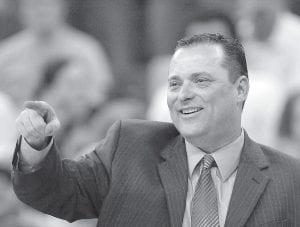 It will be a game of lasts when Kentucky plays Notre Dame in a National Invitation Tournament game on Wednesday night.

How many lasts is the question.

“I think it’s exciting that UCLA opened this building in 1968 and a program like Kentucky’s will close it,” Fighting Irish coach Mike Brey said Tuesday.

Gillispie, who has a 40-26 record in two seasons at Kentucky, was asked after the Wildcats beat Creighton 65-63 on Monday whether he was worried speculation about his job might be distracting his players.

“You never know how that’s going to affect anyone,” he said. “I have no idea if those guys listen or read or whatever. I have no idea.”

“We try to do what he tells us best we can. We’ve improved dramatically over the season and especially in this tournament,” he said.

Gillispie said he’s not concerned about the speculation.

“I’ve been focused on the things I do control,” he said. “I’ve not worried one second about any of that stuff.”

Harangody, who leads Notre Dame with 23.3 points and 11.9 rebounds a game, said he hasn’t thought much about whether to skip his senior season and enter the NBA draft.

“Talking with the seniors, sure you have to think about that. But I haven’t really got into the thought process of what I’m going to do yet,” he said. “After the season is over, (I’ll) just sit down with coach and just talk things out.”

When the Irish return to the Joyce Center in October, it will have a different look. Capacity will be about 9,200, down from the current 11,418. The renovation includes replacing 5,763 bleacher seats with chairs, and fans will be closer to the court. A three-story atrium that will include an expanded retail store and ticket offices is scheduled to open in January. An overhead scoreboard will be added in 2009-10.

The game Wednesday night also will be the last time the Irish seniors play at home, the fourth time this year they’ve faced that possibility.

Brey said his message to the team is that aside from possibly earning another trip to Madison Square Garden, the Irish have a chance at ending a 10-game losing streak to the Wildcats, who are 41-17 all time against the Irish.

“It kind of tells you their program has owned our program. We can’t mince any words there,” Brey said. “I think I’ll talk to the guys a little bit about that. Maybe it’s time for us to get one in this series.”