UK Olympian is seen as ‘future of the sport’ 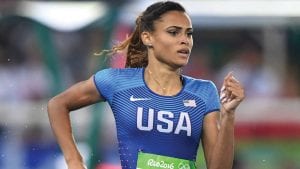 It was almost 25 years ago that Kevin Young became the first person to run the 400-meter hurdles in less than 47 seconds. His time of 46.78 seconds set a world record — and 25 years later it still stands.

Young, who won the gold medal in the 1992 Olympics while breaking the record set by Edwin Moses, was at the Maximum Velocity Track & Field Camp at Centre College in Danville last week sharing his expertise with youngsters from Kentucky and other states.

One high school hurdler that he already knows plenty about, though, is Kentucky signee Sydney McLaughlin of New Jersey. She qualified for the 2016 Rio Olympics and set national high school records in the 300- and 400-meter indoor hurdles as well as the same two events outdoors. She also holds state record in the 200- and 400-meter dashes.

“She is top notch. She was a world-class hurdler at 15 or 16. As she gets older and matures and with her already running on the international level, she is the measuring stick for others at this point,” said Young, who is in the National Track and Field Hall of Fame.

“Sydney is definitely the future of the sport. She’s very sharp. I definitely see her with the ability to break the world record.”

Some believe she could be the most talented athlete on the Kentucky campus next year. After all, she’s been mentioned as the most dominant high school athlete since LeBron James 14 years ago.

Young has watched her compete and says as good as she is, she will get better.

“As a hurdler, I will be a critic. She is a great quarter miler. She is a great hurdler, but she can be better. There are some minor things that she does that she might not even be aware of that if she corrects, she’ll get even better,” Young said. “As a hurdler there can be things you can’t see yourself. You need a third or fourth set of eyes. She rides a little bit too high over the hurdles and technically that is enough to impact your time over 10 barriers.”

Young believes running the 400-meter dash or being part of 4×400 relay teams will improve her time in the hurdles because it will increase her leg stride length.

“She is going to find out that she doesn’t need to drive that leg (over the hurdles) like she does. She will just step over. She will find a way to mimic the flat race (400 dash),” the former gold medal winner said. “She is great now. When you see an incredible young athlete like that and try to project how good they will be in the future, it’s not easy. You just want her to stay healthy and enjoy what she’s doing and not get burned out because she has it all to be not just good, but great.”

Young is a bit surprised McLaughlin is going to college. He knows shoe companies have to be waiting to offer her plenty of money to endorse a product and turn professional like Allyson Felix, the only female track and field athlete to ever win six Olympic gold medals, did.

“Sydney is already a worldclass runner. Usually you grow into that as you matriculate through the college ranks,” Young said. “She obviously doesn’t need to do that. She is perhaps the best high school hurdler we have seen in many, many years. It’s really a big deal for Kentucky to have her.”

One reason Kentucky has her is volunteer coach Kendra Harrison, a former UK standout who broke the world record in the 100-meter hurdles in 2016. That record had stood for 28 years.

“They showed me how to train hard. Think about it. She has been trained by her high school coach. Now she is going to be coached at a whole different level. Just having Harrison to be around and watch, that’s huge for Sydney,” Young said.

Former UK quarterback Derrick Ramsey, now the Kentucky Secretary of Labor, had some memorable wins at Commonwealth Stadium during his UK career. He has no problem with the name being changed to Kroger Field.

“It’s easy for me having been in that athletic director’s seat (at Coppin State) to know it is really competitive to get dollars for your program. To be competitive from every angle, you have to take advantage of it,” Ramsey said.

“Look at Florida? What is the name of the football stadium (Ben Hill Griffin Stadium)? It is called the Swamp. One family donated millions for the name and then (coach Steve) Spurrier in and called it the Swamp and that’s all it is known as now. As a player, you just line up and play football and go win games. Names don’t matter to you.”

No reason was given for why Kentucky incoming freshman point guard Quade Green was not among the 28 players invited to try out for the USA under 19 team that will be coached by John Calipari.

Kentucky freshmen Hamidou Diallo, PJ Washington and Kevin Knox Jr. were invited to the tryouts later this month for the team that is scheduled to play in Egypt in early July.

Green’s Philadelphia high school coach, Carl Arrigale, said he did not know why Green was not on the tryout list because he had not talked to him since he reported to UK.

“I don’t know if it was something UK did not want him to do or what,” Arrigale said. “I thought he was excited about being on the team, but things change.

“I just know he had a great year for us. He had to do some different things for us and we asked him to do a lot of things for us this year. He had to shoot the ball for us and he won’t have to do that at UK as much. He will have his games if they need him to get buckets because he is a really good player. But for us, he had to score.”

Green did enough to help his team win the state title.

While I was hosting the Leach Report for Tom Leach recently, I got to have Kentucky softball coach Rachel Lawson join me for a segment. That gave me a chance to ask her the question I’ve wanted to since UK was eliminated by Oregon in the Super Regional?

What was that illegal pitch call against senior Meagan Prince in the second game that led to a comeback win for Oregon?

“We are not allowed to criticize umpires,” Lawson said. “We were in a tight situation and I could have let it rip (with the umpires) but I am the pitch caller. I did not feel getting ejected would be the right thing. But it was a hard call to stomach.

“It was the first illegal pitch call in her entire career. What really got me was that the other team’s third base coach was the one who yelled illegal pitch first. Then the umpire called it. That’s what it was so difficult to swallow.

“It changed the momentum and had to have had an effect on Meagan. That kind of thing just changes the rhythm of everything.”

Former UK All-American Derek Abney got to meet Kentucky receivers coach Lamar Thomas when he was back in Kentucky as a Governor’s Cup honoree.

“He is such an X’s and O’s guy, but at the same time he talked more about building the character of his kids, which was so important to me,” Abney, a standout receiver and kick returner, said. “He realizes that not only are X’s and O’s important, but so is building the character of kids 18 to 22 on and off the field. I hope he does great because he really impressed me.”

“ I talked with him (Thomas) about earning it. When he played, he earned it. The guys with the swag, it is real and they have earned it,” Abney said. “He has every right to have that. I don’t think coach Stoops minds that with his receivers coach, especially if he gets the receivers to play the way he did.”

“This game is a lot of fun. You get to play with the best of the best, so it is not a lot of pressure,” Green, who verbally committed to Kentucky about a year ago, said. “You just want to be out here having fun. You want to be competitive with everyone and help the older girls get ready for Indiana. But you also want to relax and have fun with girls as good as you.”

Green averaged 23.1 points and 7.2 points for 28- 3 Harlan County — coached by her mother, Debbie Green — last season. She shot 53.8 percent overall from the field, including 43.8 percent from 3-point range, and 77 percent at the foul line.

Green has a definite list of what she wants to work on this summer to get ready for her senior season as well as her Kentucky career.

“Definitely my 3-point shot. Getting to the rim more. I am more of a pullup shooter. Getting more consistent and accurate with my shooting is a big thing. Working on footwork. Just things for college level basketball that I know I have to do, or do better,” she said.