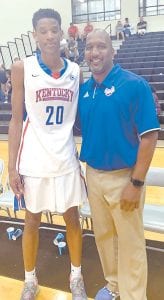 JJ Traynor has gone from a player who averaged 11.2 points and 8.6 rebounds per game for Bardstown, which only had a 15- 16 record last year, to a top 100 recruit nationally in a matter of months.

The 6-8 Traynor, the son of 1993 Kentucky Mr. Basketball Jason Osborne, is now the highest-rated instate player in the 2020 recruiting class and Bardstown coach James “Boo” Brewer, a former Louisville player, says he has changed dramatically as a player in recent months to earn that boost in the national rankings.

“He has put the work in. He has been working on his ball handling, decision making, strength, shooting. He has just gotten a lot better overall and is still improving,” Brewer said. “He has such a great bloodline with his dad and mom. He’s a young player. He’s just now turned 17, but his maturity is going and he is starting to realize his full potential.”

Brewer says Traynor will take an official visit to Cincinnati this week and was scheduled to make an unofficial visit to Louisville. He plans to be at Kentucky for Big Blue Madness on Oct. 11. Brewer said Traynor hopes to make visits to Missouri, Michigan and Maryland. He made his first official to Western Kentucky in May.

“He’s not far enough along to have a favorite,” Brewer said. “We are going to set up some more workouts here. We are just taking it one day at a time. So far he is enjoying the recruiting attention. He’s not a kid to do a lot of bragging or get big-headed.

“He’s very grounded and humble. He knows what he has to do and what needs to be done. He’s enjoying the process and talking to all these coaches. It’s really great not to have to worry about him getting a big ego.”

Brewer said Traynor “leans” on him for help with college recruiters but also has a lot of support from family and his AAU coach — Traynor did not play AAU until this summer — who is a former Big 10 player. Traynor has been in the Bardstown school system from day one and basketball is the only sport he plays.

“He’s competitive and hungry but he also does all the intangibles. He blocks shots, runs the floor and is very, very athletic,” Brewer said.

“If they were standing beside each other, you could not tell the difference in them,” Brewer said. “He is more athletic than his dad and that is saying a lot because his dad was a phenomenal player. He does not pass as well as his dad yet but the dribbling is there. His shot is not quite there but it is coming, too.”

Traynor did skill work with Brewer at 6 a.m. and then would drive to Louisville to do strength work in hopes of adding weight for this season.

“He weighed in today at 178 pounds,” Brewer said last week. “Some places have him listed at 195. I wish he was. The goal is to get him to 185 or 190 before the season starts. He’s gained about eight pounds since school started three weeks ago.”

Brewer is encouraging Traynor not to pick a school that others might want for him. He has told him not to get “overwhelmed” by the process.

When Detroit offensive lineman Deondre Buford made his commitment to Kentucky official last week, he explained that he actually had told the UK coaches about two months ago that he would play for the Wildcats.

He was not trying to garner more attention by making the announcement public. Instead, he was waiting to do it on Aug. 19 — his late father’s 45th birthday. Andre Buford was murdered Nov. 3, 2018, and his son wore a Kentucky basketball jersey to honor his father at his announcement ceremony at King High School.

Buford had 25 scholarship offers but picked Kentucky mainly because of his relationship with UK assistant coach Steve Clinkscale just like previous Michigan 2020 commits Justin Rogers, a lineman, and Earnest Sanders, a receiver, said they did when they picked UK.

Kentucky got Marquan McCall and DeAndre Square out of Michigan before that and both could play significant roles in their second season at UK this year.

“In the state of Michigan the best players seem to be close knit and kind of follow each other,” Cats Pause/247Sports recruiting analyst Josh Edwards said. “Once you get a couple of them, it’s easier to get more. Kentucky is starting to add numbers up and the relationships they are building in that state are allowing them to succeed.”

Edwards believes the message UK coach Mark Stoops and his assistants deliver about what UK can do not only for players on the field but also to develop the player as a person resonates well in recruiting, too — especially when a team is winning like UK has been.

“They are talking about the development as a person that sets you up for the rest of your life outside of football,” Edwards said. “When you can take the on-field production of guys like Josh Allen, Benny Snell, Mike Edwards or Lonnie Johnson and combine that with the family feel they have in Lexington, then you can recruit a lot of top tier guys.”

Louisville Christian Academy junior offensive tackle John Young has had a few schools continue to recruit him hard but he insists his recruitment is a “done deal” for Kentucky just as he said when he verbally committed in April.

“I still talk to the UK coaches. They all texted me before our (first) game wishing me luck and then congratulations after we won.”

“I think that is one good reason they do so well in recruiting. They are not calling you just to check off a box. They genuinely care about guys they recruit and that’s why they are in such good shape with so many players,” Young said.

That includes Detroit five-star offensive lineman Justin Rogers, a UK commit many thought would flip to Alabama or another school after he made his commitment. Rogers, though, recently made an unofficial visit to UK and stayed with Lexington Catholic quarterback Beau Allen, another UK commit.

“I talk with Justin almost daily and he’s part of a big group text we have with all the commits,” Young said. “I think he is just as solid with Kentucky as he was on day one. I have 100 percent faith that he is all-in with Kentucky.”

Young said he does have one definite in-state target to add to UK’s recruiting class — Bowling Green safety Vito Tisdale.

“He’s a great player that we really want,” Young said. “A lot of us are working really hard to make sure we get him, too.”