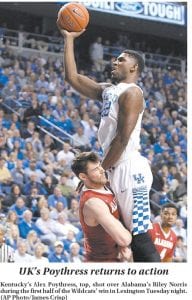 Jamal Murray scored 23 points, Tyler Ulis added 19 points and 10 assists and No. 16 Kentucky pulled away from Alabama for a 78-53 victory Tuesday night.

Senior Alex Poythress returned after a five-game absence because of a right knee injury to come off the bench and score 14 points, helping the Wildcats (21-7, 11-4 Southeastern Conference) bounce back from Saturday’s overtime loss at Texas A&M.

Poythress’s return was needed for a Kentucky squad that played without starting forward Derek Willis, who sprained his right ankle against the Aggies.

Isaiah Briscoe scored 10 points and Marcus Lee grabbed 12 rebounds for the Wildcats, who limited the Crimson Tide (16-11, 7-8) to 35 percent shooting and handed them a second straight loss. Kentucky outscored Alabama 40-22 inside, outrebounded the Crimson Tide 41-29 and made 22 of 28 free throws.

Isaac Humphries had four points and four rebounds in his first start as Kentucky maintained its one-game conference lead and swept Alabama.

The Wildcats certainly needed a lift after the A&M loss that ended on Tyler Davis’s buzzer-beating putback — a game-winning play that followed a controversial technical foul on Humphries for spiking the ball cost them the game.

Humphries was immediately apologetic about his gaffe, but teammates and especially Wildcats fans seemed to have forgiven the 17-year-old Australian as he was introduced to loud cheers for his first career start. Grabbing a career-high 12 rebounds certainly boosted the 7-footer’s cause for this game, especially with the 6-9 Willis on the bench with a boot on his foot.

The Wildcats got another lift physically and emotionally when Poythress entered in the early minutes. He quickly contributed two baskets and two free throws to get Kentucky started toward a 15-8 lead as it benefited from the Crimson Tide’s cold shooting start.

Alabama regrouped to get within two points but the high-scoring Obasohan (15 points) was the only one hitting shots in the first half as the Crimson Tide made just 26 percent from the field and went scoreless for nearly 7 minutes. Their 33-12 halftime deficit could have been worse if Kentucky (38 percent) hadn’t also cooled off.

The Wildcats offset that by making 10 of 13 free throws and outscoring Alabama 18-8 inside.

Kentucky steadily pulled away in the second half, leading by as many as 24 points with 4:46 remaining. Alabama first-year coach Avery Johnson couldn’t find much scoring help for Obasohan other than Justin Coleman, who had eight.

Alabama made just 1 of 16 shots during one firsthalf stretch. …. The Crimson Tide fell to 4-3 against ranked teams this season.