UK professor who specialized in bears, elk is killed in crash 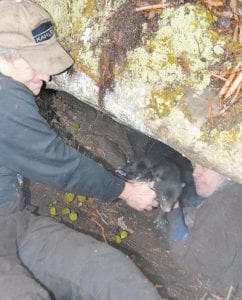 Dr. David Maehr, left, counted this bear cub during a trip to Pine Mountain in Letcher County during the winter of 2007. Maehr, who also specialized in elk restoration, was killed last week in a plane crash in Florida. (UK photo)

University of Kentucky professor David Maehr, who headed a study of Kentucky’s growing black bear population in for much of the past decade for the Kentucky Department of Fish and Wildlife Resources, died June 20 in a plane crash in central Florida.

Capt. Paul Blackman of the Highlands County Sheriff’s Office said witnesses told him the small plane stalled, did a 360 and went straight down, according to a report in the Lake Placid News.

Maehr was conducting aerial surveys of black bears for the Archibold Biological Station in Lake Placid when the plane crashed. He was on a sabbatical from the University of Kentucky.

Maehr had worked closely with Kentucky Fish and Wildlife throughout the department’s reintroduction of elk to eastern Kentucky, and his research was instrumental in supporting efforts to sustain the natural re-colonization of black bears in Kentucky.

“He was a mentor for dozens of wildlife conservation biology students, and his legacy will continue on through their work and studies for decades to come,” said Wildlife Division Director Dr. Karen Alexy, who earned her doctorate working with Maehr during Kentucky’s elk reintroduction. “There are so many things that can happen during a reintroduction such as that and he was responsible for monitoring 500 radio-collared elk. He played such a huge role in the initial success of that effort.

“”He and his team had just completed a three-year black bear population study for the department in southeast Kentucky,” Alexy added. “He loved his students. They were his extended family, and we will all miss him.”

“Dr. Maehr was critical to the elk restoration in eastern Kentucky when we began the process,” said Kentucky Fish and Wildlife Commissioner Dr. Jon Gassett. “We needed hard data on the movement, reproduction and health of the new herd, and his students really came through for us.

Dr. Maehr is survived by his wife, Diane, a son, Cliff, and daughter, Erin.