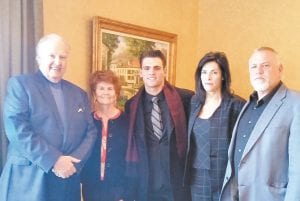 Kentucky signee Walker Wood, center, had an emotional thank you for his parents when he received the Paul Horning Award as the state’s top football player from Hornung, left. See Page 9.

Nickeil Alexander-Walker has one word to describe what type of player his cousin, Kentucky signee Shai Alexander, is.

“He is really unselfish. We have to tell him to get to the basket and score and take over. He does that well but that’s not his tendency to be selfish. He is just not like that.”

What about off the court?

“Off the court, that is my brother. He brings you up. You can’t be sad around him. A lot of emotion, but great to be around. Nice person, never mean. His smile brings smiles to other people,” Alexander-Walker said.

Shai Alexander is a 6-5 guard and one of five players in UK’s 2017 recruiting class. He played at the Marshall County Hoop Fest last month and is scheduled to return to Marshall for another holiday event Feb. 17-18 along with another UK signee, Las Vegas forward P.J. Washington.

The two cousins are from Canada and knew each other well growing up.

“If not my house, it was his house every weekend together,” Walker-Alexander, a guard heading to Virginia Tech, said. “Sometimes we were together like every day in the summer. We grew up like brothers, not cousins.

“We went hard against each other growing up. It’s good that we got that but it never turned into fighting. It was tough, though, and made us who we are today. We just feed off each other. We know each other but he’s easy to play with. He makes you look good. That’s the best thing about playing with him.”

John Calipari has had two Canadians — Jamal Murray and Trey Lyles — turn into NBA first-round draft picks after just one year at Kentucky. Both are having productive NBA seasons now. 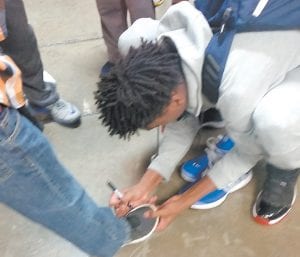 SIGNING SHOES — Shai Alexander figures to become even more popular with UK fans once they get to see him play and the demeanor he has on and off the court.

“I would love to maximize my potential like they have done,” Shai Alexander said. “I actually played against Jamal a little bit in high school back in Canada and I got to watch Trey at Kentucky. They are both really good and when you go to a place like Kentucky it just helps you get better.”

Paintsville linebacker Kash Daniel verbally committed to Kentucky early along with two other in-state Army All-Americans, Landon Young and Drake Jackson. None wavered in their commitment. Getting to play in the TaxSlayer Bowl last week more than justified the faith he had in coach Mark Stoops and the UK program.

“Throughout my whole recruiting process I heard, ‘Don’t go to UK. It’s nothing but a basketball school.’ For a while there when I first got here, it kind of seemed like that,” Daniel said. “The first two losses this season did not help that either.

“Once we started winning and got people back in the stands and could see how much this team has grown over this year, I don’t have one regret with coming here. I love this university, love the people, love our coaches, love my teammates and everybody involved in this program. We’ve had a good year and can make it even better when we win this bowl game.”

The semester break always gives Kentucky coach John Calipari extra time to work with his players in what he refers to as “Camp Cal” each year.

“My biggest adjustment has been handling a college schedule and with this weather, it’s hard for me to get to class,” Fox, who is from Houston, said. “In high school you were always in one building and it was warm. Now you are walking through 30-degree weather, or worse, and it is different. It’s difficult for me. I am used to 100-degree weather.

“I have seen snow and been in snow but I not used to it. I am not going to say I hate snow, but I would rather be warm than cold any day of the week. Cold is not my favorite thing, so that worries me more than anything Coach can put us through.”

With only 11 players, including walk-ons, on the roster and just eight that play regularly, how does Kentucky Hoops coach Matthew Mitchell balance pushing players in practice to get better versus making sure the players have enough energy for a long season?

“It is a real opportunity to learn as a coach and try to figure that out. That is just a work in progress. You are trying to figure out how to practice them and it is a different way then we have had before,” Mitchell said.

He said despite demanding, tough practices, it has been more of a “mental” battle for the players than it has been physically.

“We have to do a good job as coaches of letting them know that you have more than enough to get the job done. The team (Washington) that sent us home last year (in the NCAA Tournament) played five people, six tops and every now and then got a seventh player in there. So we can do it, you just have to have that belief,” Mitchell said.

“So as a coach, we are trying to work our way through that and it is a different team but every year is always different and you always have to figure out the best way to get that particular team to perform. We are practicing really hard.”

Mitchell has even found a way to spin how having fewer players has helped in practice.

“You don’t have as many people to get reps so you can move through things and the time that you are out there on the court isn’t as long,” Mitchell said.

Before the season started, Kentucky Radio Network analyst Mike Pratt told me he thought the development of UK’s interior players would determine the success John Calipari’s team would have in postseason play .

With Southeastern Conference play underway, Pratt readily admits the bigs have not progressed as quickly as he expected.

“Cal will never say that, but it’s true,” Pratt, a former UK All-American, said. “Bam (Adebayo) is really trying and starting to get his rhythm and feel down. I see him getting it. He looks comfortable and that’s what is important. Until you are comfortable, you feel hesitant. Some guys just take longer than others to get it. But I do like where Bam is going.

“Isaac Humphries has shown flashes but has been inconsistent. Same with Kenyan (Gabriel) and Sacha (Killeya-Jones). But they still have a lot of time to develop and I think they will all get it.”

Lafayette quarterback Walker Wood won the Paul Hornung Award given by the Louisville Quarterback Club to the state’s top high school football player. His acceptance speed was quite moving.

“My mom and dad are two great people. My mom is tough, and I have to mention she is also beautiful, loving and would go to the end of the world for me,” Wood, a Kentucky signee who will start classes next week, said. “There are a lot of things I could not have done without her.

“My dad is funny, smart and tough. He’s been a great example for me. He gets up and works hard every day. He does not let a day go by without putting all he has into that day. He made his mark on me.”

He was just as eloquent and thoughtful thanking his coaches and teammates, including four linemen he brought to the awards luncheon with him. He even thanked the high school custodians for what they did for him during his high school years.

It’s not often that one can ask John Calipari something that he will not have some kind of opinion about. However, recently he did balk at answering a question.

Calipari was asked what he thought about several key college football players not playing in bowl games to avoid injury and what he would do if one of his players decided to do the same thing.

“ I haven’t thought a whole lot about it. I saw a couple of those situations where players are doing that. You think about it. You don’t want to get hurt before this stuff, and I can understand it, but I would probably have to think about it a minute,” Calipari said.

“I just kind of glanced at it. ‘Wow, interesting.’ But I haven’t spent any time really dissecting or, ‘Here’s why, here’s why not,’ to where I could think through. Give me some time. If you ask me that in a couple of weeks I’ll have a better answer.”

Could it happen in college basketball? Yes. Many feel it did last season when LSU declined a NIT bid to end the career of freshman Ben Simmons. However, many speculated that Simmons had already decided not to play in the NIT to avoid injury — and he did become the No. 1 overall pick in the NBA draft.

Not sure I could envision a player shutting his career down going into the NCAA Tournament, but I could see great players on really bad teams deciding enough was enough and bailing out to avoid the chance of injury.

After Kentucky lost at Louisville, Kentucky coach John Calipari insisted having to play more half-court offense than what the Cats had in other games this season.

Senior Mychal Mulder hinted that the Louisville loss did send a message to UK about its half-court offense.

“We’re really good at getting up and down the court, flying, getting transition baskets. When a team wants to play like that in the half court you need to understand what a good shot is, what we’re going to run, how we’re going to play. Just in case you don’t get that transition bucket it’s like, what do we go to now?” Mulder said. “I feel like we’ve worked on that and we’re prepared for that.”

Mulder said the loss also enabled UK’s freshmen to see what that atmosphere at road games will be like during SEC play.

“Going to Louisville, you understand they hate you over there. So now coming on the road you get an idea of what kind of intensity those gyms are going to have for you,” Mulder said. “You walk into those gyms and all their fans want to beat you so bad. It’s a huge, intense game no matter where we go.”