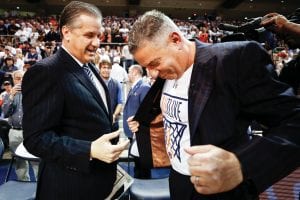 Auburn coach Bruce Pearl, right, shows his shirt to John Calipari before their game at Auburn. Pearl said he respects Calipari as well as the appreciation UK fans have for basketball. (Vicky Graff Photo)

“We had a game earlier this season and a guy threw the ball up to him. Isaiah was running behind him, dunked and hit his head on the backboard. That’s how athletic he is,” McGlown said.

“Yet if you see him play, he’s so unselfish. You think this kid could just dominate the game and doesn’t have to score more than six or eight points to do it because of everything else he can do. He can fill the stat sheet.”

In one recent win, Jackson scored 14 points (with four dunks), grabbed 10 rebounds, blocked five shots and dished out five assists. Another game he had 32 points. Yet another game it might be 11 points, seven rebounds, two blocks and two assists. He had 12 points, 11 rebounds, five blocks and three assists in three-quarters of another win.

“He is having a great season,” the coach said. “He has such an all-around game. He can make a jump shot, hit a 3, score inside, play defense and block shots. When he came back from his injury after two games, it turned our season around. He changes the game a lot because he plays above the rim.”

This is Jackson’s first year at Waterford Mott after transferring from Spire Academy (Ohio). McGlown knew Jackson’s father “a little bit” and knew some about Jackson before he arrived.

“He is so quiet and so humble, kind of shy at times,” the coach said. “It takes a while to get to know him but when you do he opens up, jokes around and just does things a normal kid does.

“If he’s maybe on the phone doing an interview, he’s kind of reserved. But you can tell he’s getting more comfortable with everything.”

He’ll play in a big spotlight at UK but at Spire Academy last year he played with LeMelo Ball, a possible top three pick in the 2020 NBA draft. Ball’s father, LaVar, is also a nationally known figure and Spire normally played in front of overflow crowds with large media contingents.

“He will open up even more once he gets there and gets other great players around him,” McGlown said. “Coach (John Calipari) will get him ready to handle the spotlight even better and handle the interviews and attention.”

He’s putting in plenty of extra work to be ready basketball-wise. McGlown says he works with his personal trainer on his jump shot and ball-handling skills.

“He is actually a small forward who is 6-9. He can handle the ball, shoot from the perimeter. He was playing point guard for us a little bit in one game to just show his other skills,” McGlown said.

Jackson has played for four high schools in four years and McGlown said bouncing around between different coaches and environments kept Jackson from having a chance to settle in and show all he can do on a consistent basis.

“He’s excited about next year and will sometimes mention Kentucky but right now he is focused on trying to make a state title run with our team because he values winning more than anything,” McGlown said. “He will say something every now and then about UK but then go a few days and not say anything. But there’s no doubt he’s excited about what lies ahead for him at UK and he should be. I think he’ll do great.”

Auburn coach Bruce Pearl, not a favorite of some UK basketball fans, recently joined Paul Finebaum’s show on the SEC Network and the host asked Pearl about his relationship with Kentucky head coach John Calipari. The two went head to head when Pearl was at Tennessee and Calipari at Memphis and now in the SEC.

“I can’t control whether anyone likes me or not,” Pearl said. “For me, I have great respect for John Calipari, and the job he does. I hope he has respect for the job I do. He’s a great ambassador for our league. If you listen to him, he’s always giving the other team credit. He takes the high road.

“I feel like we have a good healthy relationship because we have respect for how difficult of a job we have and how well we’re both able to do it. Now, we’re both passionate. We’re different, but we both wear it on our sleeves pretty good.”

Pearl told Finebaum he still doesn’t believe there is a rivalry between the two programs. That was before UK lost at Auburn, it’s third straight loss to the Tigers, including one in the Elite Eight last year when Auburn advanced to its first Final Four.

“People ask, ‘Do you have a rivalry with Kentucky?’” Pearl said. “I say, ‘No, they’ve dominated the series for a long time, but if we can be competitive over the next few years, maybe we can develop a rivalry.’”

“I am sure Kentucky will be great in that game like they always are,” Pearl told me back in December at the Marshall County Hoopfest. “I have unbelievable respect for that program. We have not played well in Rupp Arena in several years.

“Got to go back again this year. Kentucky basketball fans know their basketball. I always feel a level of responsibility for playing good basketball when I take a team to Rupp because those fans respect and appreciate the game so much. Unfortunately we have not always done that.”

Three Kentucky basketball signees — Terrence Clarke, BJ Boston and Lance Ware — were selected to play in the Allen Iverson Roundball Classic April 24 in Philadelphia. Clarke and Boston earlier were named McDonald’s All-Americans and are both among 10 semifinalists for the 2020 Naismith High School Trophy.

The 6-7 Clarke is a five-star player and UK’s highest rated signee since Skal Labissiere in 2015. Clarke averaged 16.2 points, 5.1 rebounds and 3.7 assists per game over the summer in the Nike EYBL.

“His ability to create separation from a defender is as good as anyone I have ever coached here. It is off the chart,” Jason Smith, Clarke’s coach at Brewster Academy in New Hampshire, said. “He needs to be a more consistent 3-point shooter and is putting in the time to do that. But his ability to create space is at the elite level.”

Boston has jumped into the top 10 of the national rankings after his impressive senior season at Sierra Canyon. The 6-6 guard has what coach Andre Chevalier calls “a knack for getting in spaces and finding open people” and is a terrific passer.

“He’s also an amazing scorer. He has the ability to score easily because he can get to the rim and is creative in how he finishes or just pull up and shoot,” Chevalier said. “He shoots the heck out of the ball from 3-point range right now and the longer 3-point line in college will not be a problem for him.”

Ware, a 6-9 power forward out of New Jersey, has the versatility that Rivals.com basketball writer David Sisk likes a lot.

“He can guard multiple positions while still being a rim protector. In today’s game that is everything for a modern big,” Sisk said. “Offensively, I like that he has both soft hands and good feet. That makes me believe he will develop a good back to the bucket game over time. His strength is his mid-range game, so adding that would bode well.”

Remember when Kentucky lost to Evansville in November and the feeling was that while the loss was bad, it wouldn’t be something to haunt UK the rest of the season. Or will it?

The NCAA Tournament selection committee — UK athletics director Mitch Barnhart is vice-chairman of the committee — announced its early tourney selections last week and Kentucky was not one of the top 16 teams. The main reason given was the loss to Evansville — the 296th ranked team in the KenPom ratings that the NCAA committee uses to help evaluate seedings.

Do not blame Barnhart. He was not allowed to be in meeting room when UK’s positioning was being discussed and won’t be when the real pairings are made, either.

David Worlock of the NCAA did hear the discussion about UK.

“From a positive standpoint, from Kentucky, were some of the performance in the non-conference, specifically a road win at Texas Tech and a neutral court win over Michigan State, to go with the home win over Louisville, so they have three high-quality non-conference wins that certainly helped Kentucky,” Worlock said.

“And as far as the negative were some of the losses, the loss to Evansville specifically, was probably enough to keep them on the outside of the first four lines.”

Worlock said Kentucky, LSU, Iowa and some Pac-12 teams were considered for inclusion in the top 16 and could end up there when the real seedings are announced March 15.

“There’s plenty of opportunities for all those teams to get quality wins before the end of the season and potentially move up into that top four lines,” Worlock said.

For Kentucky, though, that makes the game at LSU Feb. 18 and home game with Auburn Feb. 29 must-wins to have any chance to impress the NCAA committee because overall the SEC is not that highly regarded this year.

“We are not really worried about that right now,” Kentucky guard Tyrese Maxey said after UK’s win over Tennessee when told about the early seeings. “We are just trying to get one percent better every day.”

Quote of the Week: “Everybody’s wired different. Something about me just is driven where if somebody doesn’t like it I just try to prove them wrong and I think we’re trying to do that as a team as well. People doubt us, people are going to doubt us this year and we just want to try to prove them wrong,” sophomore guard Immanuel Quickley on why he likes playing road games.

Quote of the Week 2: “That dude is unreal. He is in great shape. He can grab rebounds, block shots, he does big things for us. He gets hands in passing lanes. It’s just all starting to pay off for him and it’s awesome to see because he deserves it. That dude is always in the gym, he is always working out,” Nate Sestina on UK teammate Nick Richards.

Quote of the Week 3: “Two players who are the epitome of patience with themselves and investing in extra practice time. Good lesson for many,” ESPN national recruiting director Paul Biancardi on UK’s Nick Richards and Immanuel Quickley.