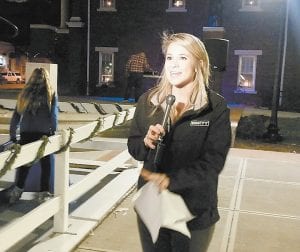 Kentucky recruiting coordinator Vince Marrow says 2019 is going to be a “strong” recruiting year in Michigan and he hopes adding Michigan prep standouts Marquan McCall and Deandre Square to this year’s recruiting class will help UK reach into the state for more players next season.

McCall, a two-way lineman in high school who hopes to play defense at UK, wants the same thing.

“Hopefully they see Kentucky is not just a basketball school but also a football school, too, and kids will want to commit and come down,” McCall said. “There are a lot of great players here in Michigan, including a lot that people don’t even know about.”

Kentucky signed 20 players. McCall doesn’t know many of his future teammates personally but he knows enough about Square.

“That’s my boy. He is a great player. He’s going to play wonderful,” McCall said. “If you need somebody to get on you, he could do it.”

“Before we hired Clink, I had Ohio, Pennsylvania and Detroit because Detroit was close to where I went to school at Toledo. I coached there,” Marrow said. “I knew when we got Clink, he did a good job when he was at Illinois and Cincinnati. We got some good players out of there (Michigan) and I think we are going to stay there.”

Making a move to Lexington to work for WKYT-TV was an easy decision for sports anchor Kailey Mizelle.

“I think it is a great sports town with Kentucky football, and of course Kentucky basketball, along with high school sports, horse racing. It’s really a central location to a lot of great sports teams and things, and the fans are so passionate about sports,” said Mizelle. “So I at least kind of knew what I was getting into when I came here.” 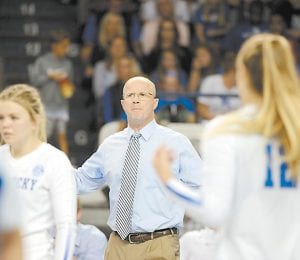 Kentucky volleyball coach Craig Skinner is proud that his team had the highest GPA of any team at UK this semester. (Vicky Graff Photo)

She was happy to join a sports team that included Brian Millam and Lee K. Howard. She did not know Howard but had worked for the same TV station in Lubbock, Texas, where he once worked and knew about him.

“I knew I was joining the ranks of some really good sports minds,” Mizelle said.

She also knew anchor Rob Bromley was retiring after 40 years at the station.

“We only got to work together for a month but I was so excited to spend that time with him,” Mizelle said. “You are never going to replace a guy like Rob. Never come into that thinking you are that replacement. No one is going to replace Rob. He was very unique in the way he was sportscaster as we all are.

“When you go to station where this person is kind of a legend in sportscasting, you don’t try to replace them. Just try to be yourself. The best advice I got when I was younger was not to be someone else. Just be yourself. The viewer turns into watch you and contacts you provide. If you try to be someone else, you are not giving the viewer what he or she is looking for, which is you and your personality. I am just excited to show my personality and be myself and hope the viewers enjoy.” 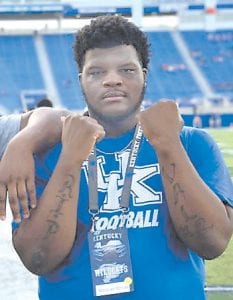 Marquan McCall hopes more players in Michigan do what he did and come to Kentucky to play football.

Mizelle is from Winter Haven, Fla., and had an older brother and a younger brother. She says she was just “one of the guys” playing sports with them growing up a “tomboy” because of the family’s love for sports.

“In high school I was a cheerleader. But we actually paid attention to the game of football. When we cheered, we were not just rally troopers. We were really athletic, too. We trained with the women’s basketball team, and they won the state championship two of the four years I was in high school,” she said. “I played soccer and different things when I was young. I was around baseball the most of all the sports because my little brother played college baseball and my dad coached him until he was in high school.”

“He taught me the game. We would sit in the outfield eating hotdogs and he would tell me everything and that’s where my love for the game comes from,” Mizelle said. “I am passionate about baseball. I met my husband working for a baseball team.”

Her mother was a drama teacher with an English background when she switched to teaching high school journalism and taking over the TV production program at the school. Mizelle liked what her mom was doing and eventually anchored her own middle school and high school news show. She even won awards for some of the newscasts.

“My teachers always said I could talk, so I thought why not make a career out of doing that. There is a lot more to being a TV anchor than just talking, but that’s how I got started. I have been editing video since I was 11 years old,” she said.

She also learned another valuable lesson at an early age — no story is too small to tell. That’s why she says interviewing coach John Calipari or a T-ball player both demand the same respect and treatment.

“Everybody has a story and I am passionate about telling different stories,” she said. “Sports is about telling stories The reason people enjoy things is the story. Sports is more than just the score. It’s about a story, the players, the coaches and what they went through to get where they are going.”

“I put a lot of personality into my sports. When I am on air, I am myself. I am not a robot. I am just trying to be myself and hope people enjoy what they see,” the WKYT anchor said.

Out of the Blue,” the documentary about Kentucky’s 1997-98 championship season that is now available on DVD.

I was lucky enough to cover that 1998 championship team that we all know as the “Comeback Cats” because of the team’s propensity for falling behind — something it did by double digits in the final three NCAA Tournament wins against Duke, Stanford and Utah.

Cameron Mills, a player on the 1996 and 1998 UK championship teams, and Dick Gabriel, a veteran UK journalist who is a producer at WKYT, did a terrific job showing the heart and character of the team and coach Tubby Smith with this documentary.

This was a team few expected to win the title like UK had won in 1996 and just missed in 1997 — both under Rick Pitino. This 1997- 98 UK team didn’t overwhelm foes with talent and first-year coach Tubby Smith had to live in Pitino’s shadow.

That’s why “Out of the Blue” was picked for the documentary’s name because many felt that’s where UK came from after a Feb. 14 home loss to Ole Miss to win the title. But Scott Padgett explained it even better.

“We were the group of the left behinds,” Padgett, now the head coach at Samford, said. “If we had been those other guys (on the previous two UK teams), we would have already been gone (to the NBA).”

The 1996 championship team was overloaded with talent. The 1997 team that lost to Arizona in the title game also had big names. But the 1998 champions had a team that learned how to play together and cared about winning more than anything else.

“That’s almost what we called it … The Left Behinds,” Mills said about the documentary’s title

Left behind or not, that 1997- 98 team has a special place in Kentucky basketball history and this documentary is only going to make that even more obvious to fans of all ages.

Just when coach Craig Skinner thought the Kentucky volleyball team couldn’t do anything else to surprise him, it did. The team finished the first semester with a 3.62 grade-point average, the highest of any of the 20 athletic teams at Kentucky.

High grade-point averages are not new for the volleyball team. Skinner says his team typically has between a 3.3 and 3.4 GPA and once got to 3.6.

“I was really excited to be the best in the (athletics) department. That was the first time that has happened,” Skinner said. “It’s not something you sit down and shoot for, but it’s a huge honor. You certainly don’t recruit kids based on GPA. You recruit based on character, work ethic. You do want to see that they care what their career will be about after volleyball.”

The team had terrific competition for playing time this season because of the depth of talent Skinner amassed. He doesn’t think that competition carries over to academics.

Skinner knows he’s a bit spoiled by having four or five athletes per semester have perfect 4.0 grade-point averages. He does use that as a recruiting advantage. He makes sure that academic advisor Amy Craiglow meets recruits and their families on campus visits. The team GPA is an “important” piece of the recruiting process.

“I am just so proud of what our team did academically,” Skinner said. “It says so much about our program and the way we try to do things. Sure, we want to win and win a national championship. But we also want to prepare our players for careers after they leave us and this shows we are doing that.”

Skinner was not surprised Nebraska, the team that beat UK in the Elite Eight, won the national title over Florida, the team UK shared the SEC championship with this year.

“I felt Nebraska was the best in the regionals and they really took Florida out of what they wanted to do,” Skinner said. “I felt we could compete with any team in the country, and we showed that.”

His team starts offseason workouts next week and returns a solid nucleus for next year.

“We got a lot of talent and competitive kids back and great pieces coming in,” Skinner said. “Getting the pieces to match up and what type system want to run so you start playing your best at the end of November is what we have to figure out.”

Quote of the Week: “He hasn’t been with us too much but that kid is a stud. He’s in the training room, he’s up here more than most of the guys here trying to get that extra work in,” Kentucky quarterback Stephen Johnson on freshman quarterback Walker Wood and his effort to get healthy enough to get on the practice field.

Quote of the Week 2: “I remember it was a rough walk to my car after the game if we didn’t score 40 when I was here before. You’d kind of put the head down and try to run in and sneak out of the back of the stadium. But I loved that. I love scoring points. It’s not going to get me upset,” new Florida football coach Dan Mullen remembering his days as a Florida assistant under Urban Meyer.

Quote of the Week 3: “Hasn’t started practicing so. I think I saw that he’s working out individually but he has not started. Haven’t asked him. We’ll see when he’s going to be capable of doing it,” Kentucky coach John Calipari on injured freshman Jarred Vanderbilt’s status.