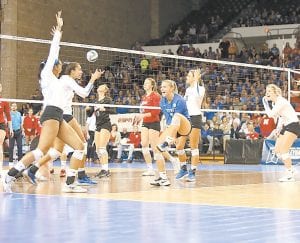 Kentucky’s volleyball season ended with an Elite Eight loss to Nebraska, but coach Craig Skinner and the seniors hope 29 wins and an SEC championship have helped lay the foundation for a program that can compete for national championships. (Vicky Graff Photo)

One reason that Florida signee Keyontae Johnson is playing at Oak Hill Academy this season is because he wanted to be on the same team as Keldon Johnson, a Kentucky signee.

The two have been friends for years and Keyontae Johnson wanted to spend this season on the court with him before they start playing against each other in college.

Keyontae Johnson went with Florida because he likes the fastpaced offense that coach Mike White uses.

“That helps me because I score off the fast break, so it will be good for me,” Keyontae Johnson said. “The reason I came here (Oak Hill) was to compete against the best and get ready for the next level — and to play with Keldon. He is a good teammate. We have played together since like fifth grade. I just wanted to play together one last time with him.”

Next season the two guards who can both impact a game in a lot of ways will play against each other on two of the Southeastern Conference’s best teams.

“I am going to win every game we play,” Keyontae Johnson joked. “I want to play him. We talk about it. We have bet $20 on who wins Kentucky and Florida this year.”

Oak Hill coach Steve Smith thinks the Johnsons will both be terrific players in college. He also believes Kentucky fans are going to love everything about Keldon Johnson.

“He wants to play at the highest level and play for money one day and felt Kentucky gave him the best opportunity to do that,” Smith said. “I think the fans are going to like him because of the way he plays, his spirit, his energy. His attitude is always good. If he gets mad, he is mad at himself. He doesn’t get mad at his teammates. He is just a hard playing kid.

“He’s very good on defense, too. We play him up on the ball. He does get mad at his teammates when they did not guard. He likes playing defense and being the guy up front on the press. He has long arms and he is making them throw lobs over him or we are getting deflections. He will really get after you on defense.”

“He can play defense, too. He’s long, athletic. I have seen him lock down on guys. He can check a center and push him out. I have seen him check smaller guards,” Mike Harmon said. “He is that glue piece. One thing you know is you will get 120 percent, he will compete until the end and he will lead his troops.”

. Kentucky volleyball’s incredible season ended with a fourset loss to Nebraska, one of the nation’s best teams, in the Elite Eight. Just as they had all season, Kentucky put up a fight until the final point.

Kentucky won 29 matches, shared the SEC championship with Florida and made the Elite Eight for the first time in 30 years. Seniors Ashley Dusek, Kaz Brown and Emily Franklin were part of 100 victories.

Coach Craig Skinner said after the loss it was impossible to get mad at his team because it always gave an incredible effort and also did things the right way. The players wore blue ribbons in their hair and Skinner wore a blue ribbon on his shirt for the win over BYU and match with Nebraska to show their support for teammate Anna Nyberg. Her father died about two weeks ago.

The seniors set the tone for all that — and laid a foundation that could provide more Elite Eight appearances based on the talent UK has returning.

Dusek and the seniors want players like McKenzie Watson, Madison Lilley, Gabby Curry, Avery Skinner and others to keep that tradition going.

“They understand the mindset— I think we kept that this whole year. We’ve talked about how we’ve wanted to get to this point a lot and it’s going to take a while to get there, but you just have to fight. I think they have the mentality,” Dusek said after the Nebraska match.

Winning seven games in consecutive seasons and going to two straight bowl games has been a step forward for coach Mark Stoops and the UK football program. Athletics director Mitch Barnhart hopes that is just the start.

“We wouldn’t have taken this job at Kentucky if we didn’t believe we could build a broad-based program and get things done that had never been done before. We’ve done that in a lot of different ways. So I don’t believe, just because it’s a tough league, that we cannot get done what we dream of doing,” Barnhart said

That would be winning a Southeastern Conference football championship, something UK has not done since 1977.

“We want to continue to try and make progress. Sometimes it takes longer than you want. We’ve invested in football here. We’ve got a wonderful stadium, a training facility that’s outstanding and I believe we’ve got the foundational pieces in place. That doesn’t automatically give you success. You must continue to do the little things,” Barnhart said.

The next results come in Dec. 20 when the early football signing period begins.

A new documentary — “Out of the Blue” — about Kentucky’s 1998 national championship will make its debut Dec. 25th on WKYT-TV and WYMT-TV and then be available for purchase by UK fans.

Once again former player UK Cameron Mills has teamed with Filthy Rags Media, Eppic Films and WKYT-TV to put the documentary together just like they did earlier on the 1996 national championship team documentary.

“The difference, to me, is that I played a lot more on the 1998 team. Everybody expected 1996 to happen. Nobody expected the one in 1998. Realistically, no one in the national media did. Kentucky fans didn’t. I think our team did because every team does but we lost a lot of good players — and a coach — off the 1997 Final Four team,” Mills said.

The TV version will be about 44 minutes. The DVD will have what Mills called “extra stuff ” that will feature more in-depth interviews than the TV show will have. Mills said the interview with coach Tubby Smith is one Kentucky fans should really enjoy.

Pre-orders for the DVD can be made now at cameronmillsradio.com or outofthebluemovie.com. If you pre-order now, the DVD will be shipped Dec. 23rd to arrive on Dec. 26th at the earliest. Cost is $9.99 plus $5 shipping and handling.

“The show will air on some other TV stations. We are still working on that and more information will be coming out later about that,” Mills said.

Mercer County’s Trevon Faulkner is considered the frontrunner for Mr. Basketball honors this season. However, what he did in football was also very impressive.

The 6-4, 205-pound Faulkner — who has signed to play basketball with Northern Kentucky University — had seven interceptions, including one for a touchdown, and four fumble recoveries to go with 130 tackles this season. On offense, he had 34 recep- tions for 648 yards and 14 scores and ran for 158 yards and three touchdowns on 14 carries. He even threw a touchdown pass for Mercer.

“We struggled up front and he was our fifth linebacker in addition to our free safety. He’s like having a 12th player on defense,” Mercer coach David Buchanan said. “He was our best leader. He committed to NKU in October and could have found a way out when our season hit rock bottom in October but he continued to fight. He’s a tremendous teammate and had five touchdowns in our win over East Jessamine in the second round of the playoffs. He’s just special.”

Faulkner had 22 points and 11 rebounds in a 73- 47 win over Adair County. Point guard Zion Harmon, the nation’s top-ranked freshman, had 19 points for Adair.