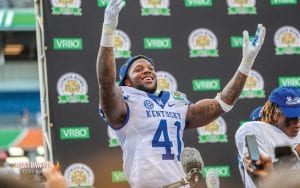 Josh Allen thinks he should be the top pick in the draft and others think it could happen. (Mont Dawson Photo)

After Kentucky’s loss at Alabama last Saturday, UK coach John Calipari talked about the atmosphere there even though the students were not on campus and Alabama was playing in the national football championship game two days later in California.

It’s the type of intensity the Wildcats normally face and UK signee Tyrese Maxey, a 6-5 guard at South Garland High School in Texas, is getting some experience with that sensation this year.

“We have got a tiger on our back in Texas this year,” Tyrone Maxey, the player’s father and a South Garland assistant coach, said. “We scheduled tough and dropped a few games early that I think helped wake our team up to finding out that nobody was laying down for us.”

South Garland is adjusting to losing a 6-9 player just before the season started — but Kentucky usually starts over with team chemistry each year and will again next season.

“It has just taken time to for Tyrese to figure out some things but things are getting better. And we are definitely facing some quality competition because the expectation for us this year is to win a state championship,” Tyrone Maxey said.

That’s much like the expectation at Kentucky to win a national championship will be next year — or any season.

During three games at the Kentucky Lake Showcase at Marshall County in late December, Maxey put his diverse skills on display. He averaged 22.6 points, 7.6 rebounds, 4.3 assists and 3.0 steals per game in the three wins. He had five 3-pointers in one game — and had six assists the same game. Another game he attempted just three 3-pointers, but pulled off 11 rebounds.

“He has a big target on his back being the top player in the state and getting a lot of recognition like he does as a Kentucky signee. Everybody wants to measure themselves against him,” Tyrone Maxey said. “He has handled it well for the most part. Last year he did not really fly under the radar because he got some attention but there’s a lot more attention on him this year after signing with Kentucky. He has had to learn to step it up even another notch with people coming at him.”

In some ways, that has included Kentucky fans who have interacted with Tyrese Maxey both on social media and in person.

“Everywhere we went to play in the summer, there would at least be a sprinkling of UK fans if not more,” Tyrone Maxey said. “He embraces the idea of interacting with fans. It’s a great fan base. There are so many Kentucky fans who have reached out to him in various ways.

“There are so many Kentucky basketball fans anywhere you go. Once he committed, we saw fans everywhere and I imagine we will until he gets to Kentucky … and then we were told it will really get crazy.”

Tyrese Maxey does not have a “best” strength on the court. He can play either guard spot because of his scoring and passing ability. He’s also a tenacious defender because of his length and quickness.

“He just tries to win a basketball game. He does have the ability to score and he can do that, but what people don’t realize about him is that he is really competitive on the defensive end,” his father, a former SMU assistant coach, said. “He rebounds the ball pretty good for a guard, too. Whatever the game presents and whatever he needs to do to win a game, he will do.

“I consider him a scoring point guard. When he was playing with USA Basketball, he could facilitate when he had a bunch of other guys who could score playing with him. He can be a defensive stopper and guard the other team’s best perimeter player. But if I had to pick his best attribute, it would be his scoring.”

The 6-4, 300-pound Gibson got his scholarship offer from UK when he was only a freshman and has unique athleticism for a player his size.

“He probably could have gone to college to play baseball but he stopped playing after his freshman year because he had three (scholarship) offers already for football,” his mother, Amy Gibson, said. “He’s still playing basketball and it is like hitting a brick wall when a player hits him. It’s not his strongest sport but he rebounds like crazy.

“He throws the shot put where he broke the school record last year in his first year throwing. He is an athletic kid. I really have not seen anything he’s not good at.”

However, Isaiah Gibson has always had one problem when it came to sports.

“No matter what sport he was playing, he would get off the bus and people would say there was no way he was the age to be playing on that team,” Amy Gibson said. “We constantly had to carry his birth certificate with us.”

She’s never had any problems convincing others, though, about what a special person her oldest son is.

“He’s really a gentle giant,” his mother said. “He has the biggest heart. He always stands up for others. He’s friends with everybody — any race, creed. Doesn’t matter who you are, he’ll like you.

“The person you see with that smile, that’s who he is. But then he puts on that football uniform and something clicks in his head and it’s time to go to war for however long the game lasts. Once the game is over, it’s done.

“He’s just always been that way. Kids are drawn to him. He always wants to play with or entertain them. He will run around and play tag and hide and seek with kids. He’ll do whatever kids want him to do to make them happy because he has such a big heart.”

Almost immediately after Kentucky beat Penn State in the Citrus Bowl, linebacker Josh Allen proclaimed that he should be the top pick in the NFL draft — an idea that UK recruiting coordinator Vince Marrow quickly endorsed.

“If Josh Allen is not the first pick of the draft I will be lost for words. He is by far the best player in college football hands down,” Marrow posted on Twitter.

Several NFL mock drafts now have Allen going No. 2 in the draft to the San Francisco 49ers.

“Allen could have entered the draft last year but the odds were slim that someone would have taken him in the first round,” R.J. White of CBS Sports wrote. “Now, unless he has a terrible predraft season, he’s almost certain to go in the top five after a year where he doubled his sack total after adding weight.”

Ohio State defensive end Nick Bosa is now the projected No. 1 pick but a lot could change at the NFL combine and other predraft workouts and interviews.

Allen won the Bronko Nagurski Trophy, Chuck Bednarik Award and Lott IMPACT Trophy, all given to the nation’s top defensive player. He was the SEC Defensive Player of the Year.

Chris Fisher of the CatsPause/247Sports says Allen’s Citrus Bowl play — three sacks and a blocked field goal —only made the argument stronger for him having the best season any UK defensive player has ever had. His effort may have also impressed NFL personnel because Allen bucked the trend of not playing in a bowl game to avoid risking injury like many projected high draft picks have done in recent years.

“Josh’s story from being a twostar recruit and barely top 100 at his position coming out of high school and a late throw-in to UK’s recruiting class to cracking the starting lineup four games into his freshmen season to national player of the year is phenomenal,” Fisher said. “He should be campaigning to be the No. 1 pick, and he could be. I am not sure who could be a better pass rusher at the next level than him.”

Blair Green had to miss her induction into the Frank Brittian Academic & Athletic Hall of Fame for Harlan County schools last week because the freshman was busy helping Kentucky beat Vanderbilt in its Southeastern Conference opener.

She was one of seven inducted into the Hall of Fame and certainly had the credentials to back up her induction.

She was the first Harlan County athlete to sign a full Division I scholarship and finished her career as the school’s all-time leading scorer with 2,375 points and rebounder with 756. She ended her prep career with 3,193 points — 11th best all-time in Kentucky.

She was an ESPN top 100 player and McDonald’s All-American nominee.

Off the court, she excelled also as she was a member of the Beta Club, National Honor Society, Gifted and Talented Leadership, Link Crew, Future Business Leaders of America, Distributive Education Clubs of America, and Spanish Honor Society.

At Kentucky she’s played in every game this season and is averaging 6.5 points and 2.4 rebounds per game while shooting 41 percent from the field. She has not miss a free throw in 16 games.

The 5-10 Ruffin already has four Division I offers, including three — Auburn, Ole Miss, Mississippi State — from the SEC. However, the one he would really like to eventually land is Kentucky and quickly admits he’s a fan of Kentucky basketball.

“I like the way they work hard at practice. They never get complacent. You have all those great players but they all play together as a team,” Ruffin said. “Nobody is cocky on that team. Everybody plays together. That’s what I like about them. I really have not heard from them in recruiting yet, but it would be a really big deal if I did.”

Ruffin and his teammates played in Marshall County Hoop Fest last month before making the trip back to Kentucky last weekend.

“I love it here. Great hospitality and the atmosphere is crazy in Kentucky,’ he said. “I love Kentucky because the fans here love basketball.”

Quote of the Week: “I think I’ll just remember all the great individual players. I got to see Benny (Snell) and Josh (Allen) play and I told them how much I enjoyed that. It’s rare to get to see great players like Art Still in football or Anthony Davis in basketball, and when you get to see greatness, you better enjoy it,” UK Radio Network’s Tom Leach on what he’ll remember about UK’s 10-3 football season.