Kentucky signee Sacha Killeya- Jones, ranked as the nation’s No. 14 senior by 247 Sports, will be playing at Pulaski County High School in Somerset Saturday at 6 p.m. against Josh Jackson, one of the nation’s top ranked unsigned seniors.

Killeya-Jones originally committed to Virginia before changing his mind and switching to Kentucky. His coach at Virginia Episcopal is Curtis Staples, a former standout at Virginia.

“He’ll remind a lot of fans of Anthony Davis. He plays comparably. He can play the two through the five, can face the basket, really shoot it, is a really good athlete to be 6-10. He’s a gym rat, so the kid is improving at a really high pace,” Staples said. “He can take you off the dribble, pull up, post up with his back to the basket. He’s a great rim protector. He’s doing a little bit of everything.”

He’s also sometimes been misunderstood. He’s a native of Chapel Hill, N.C., who was envisioned himself as a high-level quarterback. He transferred to Woodberry Forest School in Virginia as a freshman and now plays at Virginia Episcopal School in Virginia. 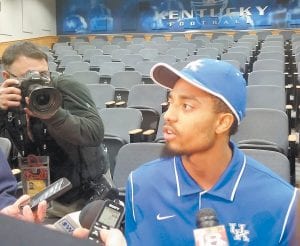 Junior college quarterback Stephen Johnson believes he can compete for the starting job at Kentucky next season. (Photo by Larry Vaught/Verizon)

His mother, Ley Killeya-Jones, says some speculated, and continue to do so, that he left Woodberry because he grew and decided to make basketball his main sport.

“Sacha has always been tall – he was 6-4 as a frosh, 6-7 as a sophomore, 6-9 as a junior and is now almost 6-11. He didn’t have a sudden growth spurt. In fact, we joke that he has been spurting since day 1,” she said. “While it is true that at the time, WFS was a strong football school, the basketball program has been growing by leaps and bounds under the guidance of coach Craig Dawson. Sacha played varsity for Craig as a sophomore and loved him.

“One of the most difficult things about his decision to find another school was leaving Craig and his program. Sacha had made the choice of foregoing football the summer between his freshman and sophomore year and returned to WFS for his sophomore year. He didn’t play football and focused on basketball and later, participated in track and field in the spring.

“Leaving WFS was not a sportsrelated decision. As a family, we made this decision based on what would be best for Sacha as he completed high school and prepared for college. We did want to make sure whatever school he ended up at had a basketball program that he could play in but that was secondary to other academic and social/cultural characteristics of the schools we considered.

“Lastly, Sacha left WFS in good academic standing. I’ve read in a couple of places that some people are saying he failed out. That is simply not true. He was never asked or forced to leave. In fact, from the Headmaster down, many folks reached out to try to make a return to WFS possible.”

Obviously, transferring to Virginia Episcopal turned out to be the perfect move and if you want a chance to see the future Wildcat play and see why his stock rose so dramatically in the last year, then make a trip to Somerset Saturday.

Preston will be back in Kentucky this weekend to play in the Thoroughbred Classic Friday in Lexington at Paul Laurence Dunbar and Saturday-Sunday in Somerset at Pulaski County.

While the versatile wing player does not yet have a Kentucky scholarship offer, he says he would welcome one and he also knows UK signees Malik Monk, De’Aaron Fox and Bam Adebayo well along with current Cats Isaiah Briscoe and Jamal Murray.

“Anybody that I know would be there if I went there,” Preston said. “Chemistry would be on point because i would already know everybody there.”

He says anyone would be happy to have Adebayo as a teammate.

“The dude is a beast. To be 6-10 with that frame, it reminds me of like Dwight Howard. He is very explosive, very strong. He is like a manchild. I played with him and it was great. I would not ask for another teammate to replace him. I would love to be teammates with him,” Preston said.

How would he try to score against Adebayo?

“I wouldn’t try to get him down in the block. If anything, I would try to beat him off speed on the perimeter. Bam is also quick and fast. It would be a tough challenge to score on him,” Preston said.

His API teammate Trevon Duvall is ranked as the nation’s No. 2 junior by Rivals.com.

“He is the top point guard in our class. It’s good for me to have him here. He’s a real point guard. He doesn’t have to score. He can pass,” Preston said. “He gets his looks and gets me my looks. With him having the ball most of the time, he’s going to look for me. Most of my points come from him giving me the ball. I am looking forward to another year with him.

So who is better? Duvall or Fox?

“I got to go with Tre because he’s on my team. But either one would be a great teammate to have,” Preston said.

When it comes to UK junior Derek Willis, maybe his father really does know best. He’s played his best basketball in three years at Kentucky in recent weeks and says part of the reason he’s become more aggressive daily is his father.

“A lot of it was my dad and there was a lot of where you want to be. Started looking at life different ways. I would say, honestly, I wasn’t really being competitive with basketball, and then it was like I talked with some friends and a lot of older people and they let me know the competitiveness doesn’t transition just with basketball, it’s everyday life,” Willis said. “There’s going to be guys competing with you for jobs, for a girl, anything. If you don’t step up and kind of be a man, then honestly, it’s just going to be a really difficult life for you. That’s kind of what made me change.”

“Honestly, I’m just playing to win right now. I don’t think about that stuff. If it happens, it happens. It’s just how I take it. For right now, I’m just doing what I can for the University of Kentucky. That’s all that’s important to me.”

Willis said both his father and girlfriend have constantly told him he could play and compete with anyone at UK and now he’s proving it.

A few months ago California junior college quarterback Stephen Johnson admitted he knew a little bit about the University of Kentucky football program but little about the players or coaches.

Once quarterbacks coach Darin Hinshaw came to UK from Cincinnati, Johnson started finding out plenty about UK because of the way Hinshaw recruited him. Now he’s at Kentucky planning to compete for a starting spot.

“Coach Hinshaw is a great guy, great coach. He knows a lot so I am excited to be working with him,” Johnson said. “They said they saw my film one day and they guessed I was a diamond in the rough which was kind of exciting to hear from these coaches.”

What about the staff overall?

Johnson completed 58.3 percent of his passes for 3,210 yards, 34 touchdowns and seven interceptions in 10 games at College of the Desert in California last season after transferring from Grambling. He also gained 429 rushing yards and eight touchdowns on 126 carries.

“I guess people consider me a dual threat guy, but I would rather pass the ball than throw it. I can use my feet to get first downs and touchdowns. I like being a dual threat,” he said. “I just have to keep my patience. This whole process has been a journey and my journey is not done yet.”

He’s already been throwing with UK’s returning receivers and likes what he sees.

“A great group of guys with tremendous talent. It was exciting the first day I came out to throw with these guys. It’s really going to be exciting what we have in store for this next season,” Johnson said.

Thanks again for letting me be part of your day. You can reach me at larryvau@gmail.com or on twitter @vaughtsviews.