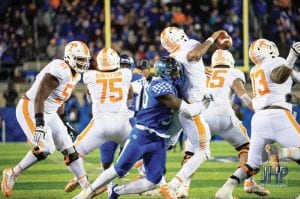 Having linebacker Denzil Ware decide to transfer for his final season is a big blow to the UK defense.

Even though most were speculating that Georgia forward E.J. Montgomery was going to pick Duke over Kentucky and others, Rivals.com writer Dan McDonald was not surprised when he signed with John Calipari and Kentucky.

“I had been tipped off by a source close to him a couple weeks ahead of time that Kentucky had the edge over Duke and UNC (North Carolina). I think his experience at the McDonald’s All- American Game finished it off,” McDonald said.

Kentucky signees Keldon Johnson and Immanuel Quickley played in the McDonald’s All- American Game and spent considerable time with Montgomery — as did Duke’s four signees. What might have sold him on UK was the need for a 6-9 player with his skills.

“I like his athleticism and his soft touch around the rim best. He’s really fast up and down the court and quick off his feet,” Mc- Donald said. “In the past, I questioned his toughness. He always floated around the perimeter too much for me.

“I thought he made great strides this high school season in playing harder, being tougher, and playing more in the paint. I give a lot of credit to his high school coach, Larry Thompson, whom I think really pushed him and challenged him. To his credit, he took to the coaching and is a better player now for it.”

McDonald said the next step for Montgomery is to become an even better perimeter shooter to make his overall game even better.

“He’s become a much more dominant post player in the past year, so now I’d like to see him round out his game and polish up his shot to where he can hit jumpers more consistently,” McDonald said. “I’d like for him to become more of an inside-outside threat.”

He showed he has the potential to do that during the Mc- Donald’s All-American Game practices when his play — along with his physical appearance — reminded UK fans of former UK All-American Tayshaun Prince. His personality might even remind UK fans of Prince, who went on to a successful NBA career. 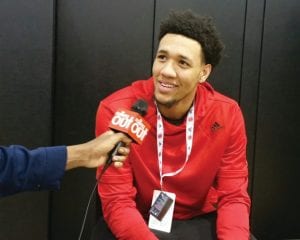 “He’s definitely a more reserved personality. He’s a quiet kid off the court, but I think he has a goofy side, too,” McDonald said. “He’s a really good kid from everything my own experiences and everything I’ve heard. It carries over onto the court, too. I think it’s out of his comfort zone to show a mean streak, but don’t mistake that for a lack of competitiveness. He’s just a more even-keeled kind of kid.

“I think Kentucky fans will appreciate the fact he’s a low key, low maintenance type of kid and player. He’ll understand his role, play it, and he’ll take well to the way Kentucky’s coaching staff tries to coach him.”

Losing linebacker Denzil Ware a big blow to Kentucky’s defense for the 2018 season.

Ware announced last week — the day before his graduation — that he was leaving UK as a graduate transfer. He became the 12th player in the 2014 signing class to transfer and is taking the same path his former UK roommate, receiver Jeff Badet, did last year when he transferred to Oklahoma for his final season. 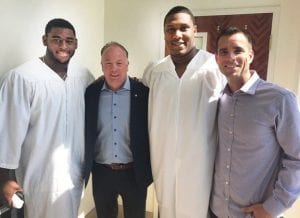 Kentucky coach Mark Stoops and FCA director Aaron Hogue went to watch Josh Paschal, left, and E.J. Price get baptized only a few hours after Stoops got back to Lexington after chaperoning a school trip to Washington, D.C.

Ware played in 37 games with 156 tackles, including 26.5 for losses and 13 sacks, in his career. He did not play in the Music City Bowl for a “violation of team rules” but went through spring practice and coach Mark Stoops even moved linebacker Josh Paschal to the defensive line to get him on the field rather than backing up Ware and Josh Allen.

Ware had been considered a possible early entry for the NFL draft but along with linebacker Jordan Jones, safety Mike Edwards and Allen opted to remain in college. Those four were supposed to be the anchors for an improved UK defense in 2019.

Think back to what running back Benny Snell said about Ware before the Music City Bowl.

“Negativity is coming and all that. I would like to say there’s no Benny Snell mentality without Denzil Ware. That man has done a lot of great things for me,” Snell said. “I’ve learned too many things from him. That man’s a great man and I hope to see him go to the next level one day. But he’s given me knowledge and there’s no Benny Snell without Denzil’s knowledge.”

Those were strong words from Snell about Ware and those who think teammates are happy Ware is leaving just don’t understand how popular he was with them.

Central Kentucky FCA director Aaron Hogue was there because Paschal, a freshman linebacker, is heavily involved in UK’s FCA chapter. He also wanted to be there to “encourage and support” offensive lineman Price, a USC transfer.

Kentucky coach Mark Stoops was also at the baptism. Remember, he gave Price a second chance to stay on the team after a spring practice Twitter tirade where he said he quit the team and criticized UK coaches. Yet he was at the baptism to support both Paschal and Price.

“Mark is really busy but he always tries to support his guys. Not too many Division I coaches are doing that,” Hogue said. “He is very supportive of his players and cares for his players. He encourages them despite his busy schedule.”

However, what makes Stoops’s support even more impressive is that he got back from an elementary school trip to Washington, D.C., with his son and other students, teachers and volunteers. The bus rolled back into Lexington about 2 a.m. Sunday — or just a few hours before the baptism.

“For him to still show up to support those guys, that’s pretty awesome,” Hogue said about Stoops. “He had other meetings to go to that day, but he still came. To me, that’s a really cool part of the story about the baptism. Not many coaches would do what Mark did.”

Continuity is a key to success in college football; something that Kentucky athletics director Mitch Barnhart certainly understands by the way he gave contract extensions to five UK assistant football coaches recently.

Former UK basketball standout Patrick Patterson just completed his first season with Oklahoma City after playing previously for Houston and Toronto. It was his eighth year in the NBA and he plans to be back for a ninth season. However, he has an interesting offseason planned.

His plan is to work for Marvel so he can learn from producers and others how they got to where they are in the movie business now. He said he had a “lead” for an internship with Marvel.

Patterson also revealed that his top Marvel movies of all time would be the original “Avengers,” “Black Panther” and the new “Avengers: Infinity War.”

Zion Harmon was excited for the opportunity to change AAU teams and play with 2019 high-level players James Wiseman, a Kentucky recruiting target, and D.J. Jeffries, a UK commit.

However, when he made the move he thought Penny Hardaway would be coaching the team. Instead, Hardaway became the head coach at Memphis and Team Penny became the Bluff City Legends.

Mike Harmon, Zion’s father, said the switch “went okay” at first. But a conflict with the program director led to Harmon, who led the state in scoring and free throw percentage at Adair County last year as a freshman

— to move to Team Bradley Beal out of St. Louis. He’s still in the Nike EYBL (the only Kentucky player in that league).

“He had to go there at the last minute and get to know his team,” Mike Harmon said. “It’s going to be okay.

“This move was totally out of his control. It had nothing to do with Wiseman, Jeffries or anybody on his team. It was all with the administration.”

Quote of the Week 2: “He is one of the main reasons I came to UK. I had a great relationship with him. He was awesome. I believed all he said and he owned up to every promise that he made to me,” former UK walk-on receiver Charles Walker on former offensive coordinator Neal Brown.

Quote of the Week 3: “UK fans have witnessed Freddie’s talent on the UK Radio Network and his work with KSR. This makes me think that coach Stoops recognized what the fans have been seeing and hearing — Freddie is not only passionate about what he is doing, but he is very thorough and detailed about his analysis,” former UK punter Jason Todd on former UK teammate Freddie Maggard joining the UK football staff.