UK still not satisfied after 6 wins 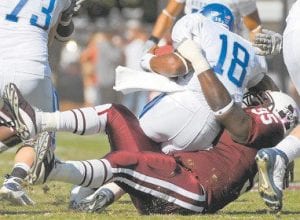 Kentucky defensive lineman Ventrell Jenkins loves Nashville and even admits with a somewhat sheepish grin that he listens to country music.

That doesn’t mean the senior is particularly fired up about the idea of the Wildcats spending another New Year’s at the home of the Grand Ole Opry.

While Kentucky’s 14-13 win against Mississippi State last week pushed the Wildcats (6-3, 2-3 Southeastern Conference) to bowl eligibility for the third straight year — the first time that’s happened since the mid- 1950s — Jenkins doesn’t want the season to end with a third consecutive trip to the Music City Bowl.

“You been somewhere three years in a row, you’ve seen everything there, it’s just time to take your program to another level and that’s what we’re trying to do,” Jenkins said. “It’d be nice to go out and practice in shirt sleeves, you know?”

The Wildcats, who beat Clemson in the Music City Bowl in 2006 and Florida State last year, have reason to dream of tropical breezes and working on their tan after another narrow escape. Kentucky begins its season-ending run on Saturday against No. 14 Georgia (7-2, 4-2), then hosts struggling Vanderbilt before ending the year at Tennessee in what will likely be Vols’ coach Phil Fulmer’s final game.

It’s a daunting stretch, but one the Wildcats have proven they can handle. Kentucky’s recent renaissance under coach Rich Brooks began with a 24-20 home win over the Bulldogs two years ago. That game ended with fans on the field trying to tear the goalposts down. A repeat performance this weekend would probably result in a more tranquil celebration, a sign of just how far the program has come in the last three seasons.

For the players, it’s not enough just to get to a bowl. It’s time to get greedy. Besides, six wins doesn’t always translate into a midwinter trip out of state. South Carolina and Louisville both won six games last year but stayed home for the holidays.

“I think everybody knows you need at least seven or eight wins to go to a bowl and we want to go to a better bowl than we have in the past,” said tight end Maurice Grinter.

If they can keep finding ways to win like they did against the Bulldogs — relying on defense and special teams to make up for another lethargic offensive performance — the Wildcats could go bowling for the third straight season for the first time since Bear Bryant was the coach from 1949-51.

“I know it’s not pretty, I know it’s not aesthetically pleasing sometimes, but we’re finding ways to win games,” Brooks said. “To me, that’s the mark of a program that is trying to establish itself as a viable team year in and year out rather than just an occasional blip on the radar.”

The Wildcats won the last two years with style points behind one of the most prolific offenses in school history. Things haven’t been quite so pretty this season thanks to erratic play at quarterback, where sophomore Mike Hartline and freshman Randall Cobb have split time.

Brooks isn’t a fan of the twoquarterback system, but don’t expect him to abandon it anytime soon. Cobb — who doubles as the team’s top receiver when he’s not under center — made just enough plays against the Bulldogs to give Kentucky the lead and one of the nation’s more underrated defenses made it hold up. Matt Roark’s blocked extra point early in the fourth quarter helped the Wildcats pull out their second one-point win in three weeks and allowed them move on after a 63-5 meltdown against Florida the week before.

The Florida loss is one that could have derailed the season. But that was Old Kentucky. Things haven’t been the same here the last three seasons at a program that has spent most of its 117 years as a diversion until basketball season rolled around.

Making history is becoming almost commonplace for the Wildcats. And while Brooks has made a habit of reminding his players the importance of breaking away from the program’s tradition as an SEC also-ran, he’s not ready to start celebrating another successful season just yet.

“The most important thing is the next game,” Brooks said. “That helps create some hopeful, meaningful history for Kentucky football. Kentucky’s had a lot of great teams in the past but they haven’t been consistent in what they have been able to accomplish on the gridiron. The focus here to me is to be consistent and be in the postseason.”