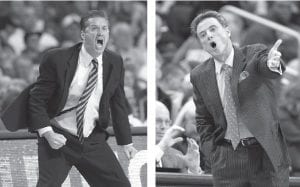 Sorry, folks. I can’t keep writing about weak holiday college basketball schedules, such as the dead pigeons placed on the agenda for UK and UofL. Not when the atmosphere from out in the state and inside Jefferson County is filled with the jealousy, bitterness, and pure hatred that it is now between both fan bases and both coaches.

Nope, not when Rick Pitino and John Calipari are sparring back and forth every day in the state’s two largest daily newspapers. Unless you’ve been living in a cave, you know that’s exactly what’s been going on for about eight weeks now, but they, Calipari and Pitino, do it in a much diff erent manner than Joker Phillips and Charlie Strong.

I’m pretty sure there is some actual genuine respect — maybe even love — between Phillips and Strong. Don’t even think in those terms when it comes to the friendship between Calipari and Pitino. Or should I say relationship? Ah heck, at this point it’s a “past acquaintance” at best.

It’s a mind game of getting a leg up on the other this time of year. This “game” has taken place many times between the UK and UofL coaches over the years, but now you’ve got two of the masters of all time going at it. Probably the most famous quote related to the UK-UofL hoops series was Eddie Sutton’s declaration that Louisville basketball was and always will be UK’s “little brother.” Admit it, Cardinal fans, that one still sticks in the pit of your gut.

I will give Coach Cal a “high five” for the class he displayed this past summer when he kept quiet during Pitino-Sypher extortion trial, a show of respect toward Pitino. Since I’ve brought up this ugly topic, if you’re a Pitino fan, aren’t you thankful this year’s game is in Louisville? If it was in Rupp Arena there wouldn’t be enough cotton in Mississippi to keep Pitino’s ears from hearing the catcalls hurled his way.

This year’s “battle” started about 10 weeks ago when Louisville fans had to absorb seeing for the second straight year the nation’s No. 1 recruiting class being showcased on the nationallytelevised Big Blue Madness.

Then, Big Blue Nation and the rest of college basketball had to sit idly by and watch Louisville bask in the glory of the opening of its sparking new state of the art KFC Yum Center, which UofL now proclaims is the Commonwealth’s best basketball facility. If that wasn’t enough, the Cards then went on an eight-game winning streak. Admit it, Wildcat fans, you were foaming at the mouth with every made three-pointer and win accumulated by the hated Cards.

Take that, Duke and North Carolina! Only problem is those numbers sparked talk of an NBA franchise for the City of Louisville. Calipari jumped on the bandwagon, saying the return of professional basketball would be good for Louisville and the state of Kentucky. Just make sure you play those 41 dates in Louisville, because the Wildcats have the love and devotion and pocket books of the entire state from Pikeville to Paducah to fill those Rupp Arena seats for 20 games a year. An NBA team would also take away the front page of The Courier-Journal
from the Cardinals several times each winter.

Pitino responded mildly to all the NBA talk, but made his point in a very stern manner, and in my eyes correctly, that the Kentucky- Indiana area doesn’t have the population to support Louisville Cardinals hoops and an NBA franchise. Pitino also correctly stated that before you even start the conversation somebody of authority with the state and city of Louisville needs to make the initial contact with NBA commissioner David Stern to see if the league is even interested. In other words, don’t just take the word of J. Bruce Miller on the subject. He is a lawyer and some of those folks are known to speak with forked tongue occasionally. It’s been made public within the last few days that Miller is presently getting a consultant’s fee from the City of Louisville on the matter. What a waste of taxpayer money.

J. Bruce Miller and a bunch of high rollers have never been and shouldn’t be the voice of the state of Kentucky when it comes to sports priorities. These type individuals have lived lavish lifestyles for several years now and have lost all contact with the common blue collar citizen who has to roll his or her sleeves up and go to work everyday. That is what this state is primarily made of, and when these citizens get their paychecks there won’t be enough left over to support UofL and an NBA team that will play 41 home dates with an average ticket price of $75 to $100 per game (and that’s if you can get one at face value). Louisville and UK both have loyal and longstanding fan bases in Jeff erson County that were established many decades in the past. These sports fans will prioritize their entertainment dollar and the NBA will lose both short- and long-term.

The region is already struggling at present to support a nowwinning Cincinnati Reds franchise that plays in the comfortable lazy hazy days of summertime in their new state of the art stadium at an average ticket price of $18.50.

The NBA can’t survive in our state right now and it’s highly doubtful it ever will.

Now back to UK and Calipari and UofL and Pitino.

Once the NBA talk subsided, the name of “Coach P” surfaced again as being interested in coaching the Puerto Rican national basketball team in the Olympics.

Then, hocus pocus, a few days later Calipari’s name surfaced as possibly leading the Dominican Republic’s Olympic basketball team. Pitino this week agreed to coach Puerto Rico’s national team next summer in the FIBA Tournament of the Americas. On Tuesday, Calipari said it would be “an honor” to coach for an international team but that he had not been contacted about the possibility of coaching the Dominican team.

My first thought to all this was those extremely important summer recruiting trips and AAU tournaments the coaches talk about must not be as important or as scenic as the shores of these two Caribbean hot spots.

Then it hit me: Surely they’re playing with each other’s mind again, aren’t they? Well, apparently not.

Still, you have to admit these two guys are bringing back the “hatred” the two programs had for each other when Joe B. Hall coached Kentucky and Denny Crum coached Louisville.