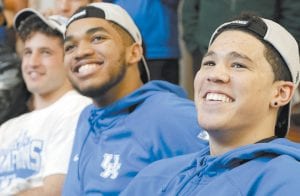 John Calipari’s platoon system gives most players on Kentucky’s roster the opportunity to be the X-factor in any given game.

In the NCAA Tournament, the player who will most likely have to fill that role will be Devin Booker.

There will come a time when the Wildcats — inconsistent when it comes to their perimeter game — are undoubtedly going to need the reserve shooting guard’s ability to knock down 3-pointers with his smooth stroke.

“Coach knows that we all have our good games and our bad games, but he just wants us all to be the best version of ourselves at the same time,” said Booker, Kentucky’s second-leading scorer at 10.5 points per game and best 3-point shooter at 43 percent.

“I feel like my role is to just take what the defense gives me and defend. Personally, I’m not playing my best ball, but as a team we’re coming together.”

Booker has shown he’s capable of handling the role even coming off the bench for Kentucky (34-0), which opens tournament play Thursday night in Louisville against Hampton.

When he enters the game, a momentum-shifting basket or two from behind the arc often follows — just look for the extended arm and three fingers in the air.

But he seems to have lost his shooting rhythm, and the Wildcats will need him to find it again — quickly.

“Devin’s got to step up a little bit,” Calipari said this week during an SEC coaches teleconference. “I think you’ll see Devin in the tournament get back to the way he was playing, losing himself in the game. There are times he’s thinking a little bit too much because he played so well (and) the expectation was every shot was going to go in.”

The Grand Rapids, Michigan, native has just one double-digit scoring game in his last five — Saturday’s 12-point effort against Auburn in the Southeastern Conference Tournament semifinal. During that stretch he has shot just 36 percent from the field and 35 percent from long range.

Calipari isn’t concerned that Booker’s struggles will continue in the NCAA Tournament. After all, the coach didn’t get too giddy at midseason when the 6-foot-6 high school All-American seemingly couldn’t miss.

During an 11-game stretch from mid-December until the end of January, Booker was 45 of 77 from the field (58.4 percent), including 25 of 38 from 3-point range (66 percent). He has cooled off considerably since but has hit enough timely jumpers to make Calipari believe another hot streak is possible.

Such is life with shooters.

One person confident that Booker’s shot will start falling again is his father and high school coach, Melvin, a former Missouri standout. The two talk often, and dad always offers feedback about his son’s performance.

During conversations with his father, Booker is usually calm and has a positive attitude, including earlier this season when his freshman year got off to a slow start.

“The game of basketball will humble you, and what I’ve told Devin in those situations is that you just learn from it, move on and try not to make those same mistakes again,” Melvin Booker said.

“I knew back in January when he was shooting 70 percent that that wasn’t going to hold up very long. But I’ve been working with him for years and knew once he got to Kentucky, he was going to work extremely hard,” he added. “You can see the improvement each game, each day, each month.”

What’s also apparent is Booker’s happiness at getting so many chances despite playing limited minutes in Calipari’s system. Make or miss, his mindset is to keep shooting and the rest will take care of itself.

“I didn’t get down early in the season because I knew I’d get adjusted to the college game,” Booker said. “I knew that if I stuck to the fundamentals, my shot would fall.”

Booker is just as confident entering the most important stretch of the season.

“I’m enjoying this experience, being a part of this team that I’ll never be a part of again,” he added. “I’m loving the opportunity to be in this position, and I’m just going to keep grinding.”